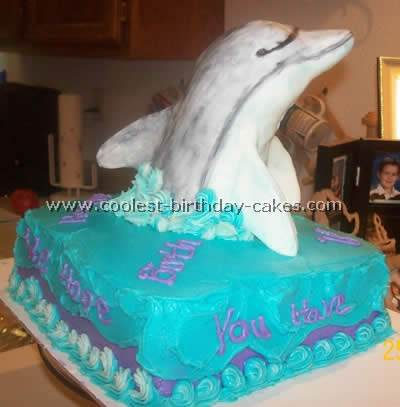 This is a cake which I copied from a dolphin picture. I made it for a friend who likes dolphins. I just used a box mix and put in a square pan. Then for the dolphin I used rice crispies. When cooled off but still moldable I just molded into an upper half of the dolphin body. The outside of it is fondant. I made lines where there should be two different color tones and then also indented for the eyes and mouth.

I mixed a little bit of coloring with water and painted the whole thing and then let dry over night. I attached it to the cake with a wooden rod. I then mixed blue and white buttercream frosting to make the waves.

My daughter was having her 9th birthday party on the beach and wanted a dolphin cake to keep with the ocean theme. After looking at several cakes on various web sites including this one, and looking at a dolphin picture, we came up with the idea of making the cake out of rice crispies.

I added the blue food coloring to the marshmallows so that the cereal didn’t taste bad and with greased hands molded the rice crispies into a dolphin shape on a tray covered in tin foil. The back ground of the cake is blue and green fruit roll ups, the eye is a blue M &M and the mouth and eyebrow are stretched out fruit chews. Because the cake was fairly hard (it was made the night before and refrigerated). I made cup cakes out of a marble cake mix but used the chocolate part of the batter to make the letters on the cup cakes. This way we had something to put the candles in.

The dolphin was a great success and the kids loved it because it was something a bit different to all the other birthday cakes they usually had.

Cake by Rachel B., Fernley, NV

I baked two 13 X 9 cakes and cut one into a dolphin shape from looking at a dolphin picture coloring page printout. I frosted the large one with a blue/green color and added the waves with blue food coloring mixed in a small amount of frosting. I then frosted the dolphin white and then the purple/grey over the top half.

Cake by Jim A., Newtown, PA

I found a dolphin picture as the inspiration for this dolphin cake that I made for my daughter’s birthday party. Before you start take a piece of half inch plywood (I cut mine to 3.5 feet by 2.5 feet) and then covered it in blue plastic coated paper. (If the paper is not plastic coated, the oil from the frosting stains the paper). I found cabinet lining paper and covered my plywood with that. If you can’t find any coated paper you can buy gift wrapping paper and then cover that with plastic wrap. Making this base for the cake makes it easy to move when you are done. My cake was so large it would have cracked if I had made it on a flimsy base and then tried to move it.

For the cake I basically made four 8X12 sheet cakes. I use chocolate, seems to hold together better then vanilla when cutting, don’t know why. I placed all four cakes together to make one large rectangle (16X24). Then I printed a clip art dolphin picture I found online. You want a hand drawn picture rather than a photo of a real dolphin.

I then cut out the dolphin picture which was approximately 8 inches long. Then I took a large piece of poster paper and laid it on the kitchen table. I took my cut out dolphin stencil and held it about 6 inches under the over head light (a flashlight can be used for this also). Basically you are casting a shadow onto the poster paper. The closer you hold the stencil to the light the bigger the shadow. Hold the stencil steady and have someone else trace the shadow on the poster paper. Now cut the large stencil out.

Place this large stencil on the cakes and with a sharp knife just cut around the edges of the stencil. If the tail sticks off the end of the cakes as mine did just use a left over scrap of cake to make the tail and place it in position. I then frosted the entire cake white. Next I cut out just the white belly part of the stencil and laid it on the frosting in the proper place. Then you’ll need to buy two cans of “Color Mist” food coloring. It’s basically food coloring in a spray paint can. Wilton makes the kind I used. I bought light blue and dark blue. Just spray the whole body of the dolphin with the light blue (make sure the belly stencil is in place to keep that part of the cake white while spaying). Also if possible spray outside or in a craft area. The blue mist from the spray seems to settle everywhere just like real spray paint. Then take the dark blue and spray the edges to add a little dimension.

For the eye and mouth of this dolphin picture cake, buy the squeeze tube artist icing. I used black. Finally I used icing and a pastry tube to make waves and a cloud. My cake was large for a party of about 20 people. It took me about one hour to make after baking the cakes. For your first time it may take a little longer.

Cake by Tracie A., Australia, QLD

I decorated this cake with mock cream I made from icing sugar, and coloured it with food colouring, it took me a total of 5 hours to make. I got a friend to draw an outline of a dolphin by looking at a picture. I used grease paper and cut out the shape, placed it over the cake, cut around the edges, and away I went covering it.