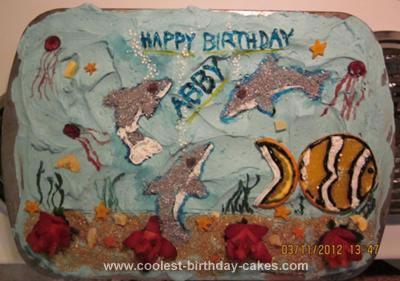 My granddaughter, Abigail, requested a birthday cake with Winter the dolphin and her two dolphin friends in Florida. I have never decorated a birthday cake, but accepted the challenge knowing how much fun it would be. I had no idea what I was doing, but decided to look up dolphin figures on the internet, specifically of Winter. Winter is the dolphin that was rescued with no tail, and a prosthetic tail was made for her.

I had taken Abigail to see Dolphin Tale last year. I found a decent picture of Winter, and a good one of a whole dolphin. I saved each picture to Word Paint so that I could re-size them on the computer screen to fit the cake. I decided on the size cake pan I would use before-hand, according to the number of guests expected at the birthday party. I would double the cake recipe to accommodate.

I baked the cake, which ended up taking more than twice as long as the recipe called for, using a recipe for chocolate cake from the Better Homes and Gardens cookbook. Then I mixed the frosting (recipe from same cookbook). I had to use the entire bottle of blue food coloring to make the frosting blue enough to be the ocean. Next, I held a piece of typing paper up to the computer screen and traced the re-sized dolphin pictures from my computer screen onto the piece of typing paper, also adding the lines where the mouth is, and where the grey/white colors meet on the dolphins. Then I cut out what I had traced.

I went to the grocery store to see what I could find for decorating. I found a bottle of cake decor candy that looked like sand, a bottle of cake candy that looked like it could be bubbles, and a bottle of silver candy for the dolphin color. I had to buy colored tubes of frosting – one large white one, a blue one, a black one, and a package of cake writing pens (4 colors). They did not carry any candied lettering, which meant I was in trouble, but would have to make do with the tube icing to write Happy Birthday Abby.

When I got home, I tried distributing the “sand” first, but noticed that the frosting was too soft, so I refrigerated the cake for an hour. I tried again, and it worked just fine. I then decided where to put the dolphins. Winter’s placement was most important. I put the Winter cut-out onto the frosting, and traced around it with the black icing tube. It began sputtering, so I used the blue tube for the other dolphin cut-out. To make the third dolphin, I flipped the cut-out over so that it was facing the other direction, and traced around it, as well.

I used the icing tube to draw the lines inside the dolphin that would separate white from silver, and where the mouth is, just eyeballing the cut-out drawing. I had to use a toothpick end much of the time to assist in distributing the icing and cake candy. Then I found an apple corer in my kitchen drawer and shook some of the silver candy flakes into it so that I would have more control over where the flakes ended up, and allowed the flakes to pour a few at a time from the pointed end onto the dolphins. Then I used the white icing tube to fill in the white portion.

I used the small round white cake candy to make air bubbles coming out of the blow-holes. I knew I needed more decorations, so I took four strawberries out of the refrigerator, and found out on the internet how to make rosettes to simulate ocean floor vegetation. Then I decided I wanted to put some starfish in the picture, so I sliced a carrot in thin strips, and cut out sections to make a star. I wanted the whole cake to be edible. Next, I used the green writing pen to make seaweed. I looked through the refrigerator and cabinets trying to figure out what else I could use.

I found some dried cranberries, and made jellyfish from those, using the red writing pen for the arms. I found a bag of trail mix, and used raisins for the dolphin eyes, and dried bananas for snails, and dried pineapples for rocks. I over-did it, but more ideas kept coming to me. I took an orange and cut two thin slices to make a clown fish. I cut a triangle out of the second slice to make the tail, and used the black and white icing tubes to make stripes.

The Happy Birthday Abby writing turned out awful, but the party guests and their parents were all very impressed with the creativity involved in decorating the cake. I allowed Abigail to pick her candles and place them on the cake. She decided to use all the candles instead of only 9. We also played “Pin the Prosthesis Tail on Winter” using tape, not pins, and blindfolds. 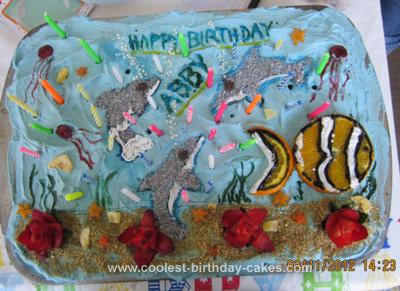 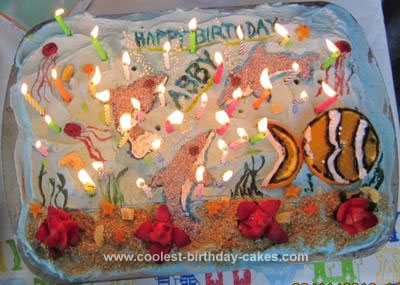 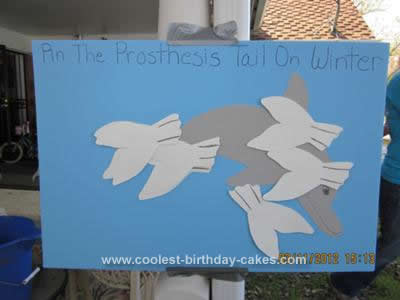