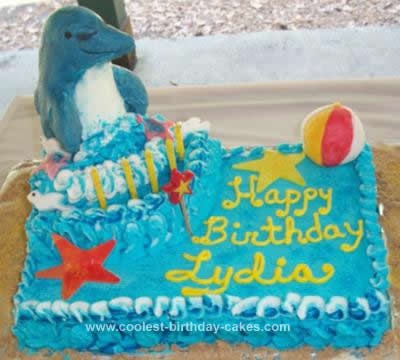 My co-worker wanted a Dolphin Birthday Cake for her daughter’s 6th birthday. After searching this site, I thought I would give it a try. My cakes are made by using a modified box mix. Use 1 cup milk, 1 cup oil, 4 large eggs, 1 box vanilla pudding and 1 yellow cake mix.

I started with a 9X13 sheet cake and 2- 9inch rounds. This required to separate cakes. Cutting the round cakes so that they would stack in one corner, I only used a portion of each layer. I wanted to elevated the dolphin to give the cake a different look. The icing is a standard butter cream.

Once I stacked the cakes, I covered all the layers with blue tinted icing. The waves were made using a large star tip with one side of the bag filled with white icing, the opposite side with blue icing and a strip of blue icing tint applied to the inside of the bag, to give the waves a layered look. ( I use a skewer to get the concentrated icing color all the way down on the inside of the icing bag.) I made several passes on the sides of the cake to make with waves.

The birds and stars on the cake were also made from fondant. Around the base of the cake I spread a very thin layer of icing and sprinkled lite brown sugar to cover the board for a finished look. 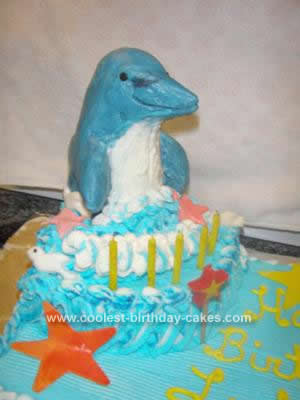