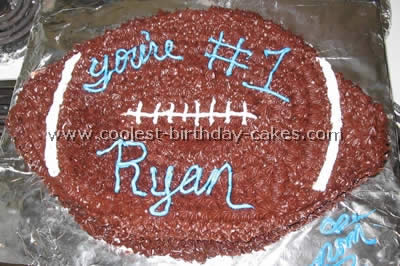 This was one of the funniest ball cakes ever. I couldn’t find a football cake pan in time so I got a turkey baking pan (the throw away one’s). I baked three boxes of cake mix, step by step, on a cookie sheet at 250 instead of 350 for two hours and covered it after the first hour so that the top wouldn’t brown. Then I cut it into a football shape and did the icing. 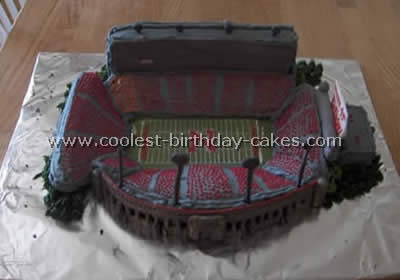 My husband is a huge Nebraska Cornhuskers fan. I wanted to make football cakes of some sort so I made this cake for his 41st birthday. I baked the cake and carved the bleachers and Media Building. I made the outside structure pieces, light poles and football field out of fondant and gum paste. 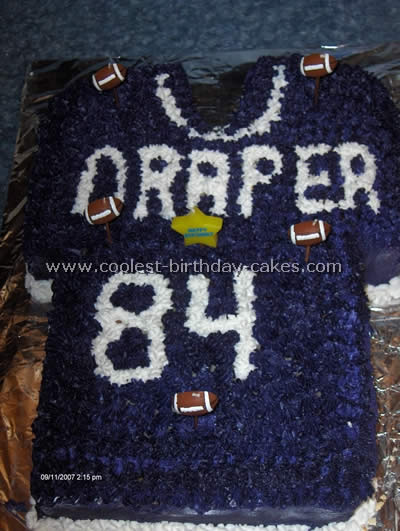 I got the largest rectangle pan I could find. This cake pan held three cake mixes. My son wanted a white and chocolate marble cake. I found a t-shirt template on the internet. I cut the cake out as a shape of the shirt. I used purple and white icing. Using a large star tipped end I started with the white lettering and number then filled in with the purple. 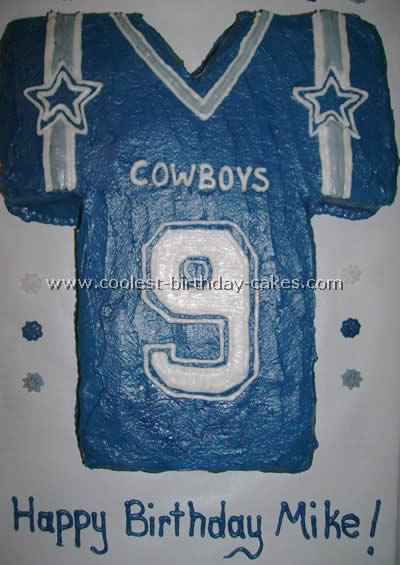 My husband is a huge Dallas Cowboy’s fan so I decided to decorate a Dallas Cowboy’s jersey cake for his birthday. It is a replica of his favorite jersey. I baked an 11 X 15 sheet cake and cut it into the shape of a jersey. I iced the cake in navy blue that I created using five parts royal, two parts black and two parts violet Wilton coloring. I used tips #3 and #5 to do the outline of the stars, the stripes and the number 9. I outlined the jersey with a small star tip and used a large star tip to add the decorations around the cake.

It was a really easy cake to do and my husband loved it! Hope other wives will make football cakes for the football crazy husbands! 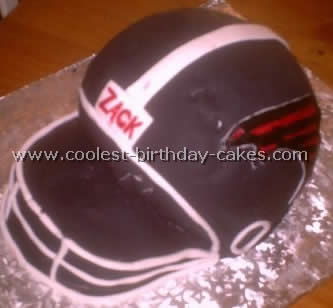 I made a yellow cake into five layers and carved them into the main part of the helmet. I made a tiny two layer cake and carved it into the face mask. Covered it all in a layer of butter cream and then in black fondant and then rolled out pieces of white fondant for the detail.

Cake by Charlene B., Grayson, GA 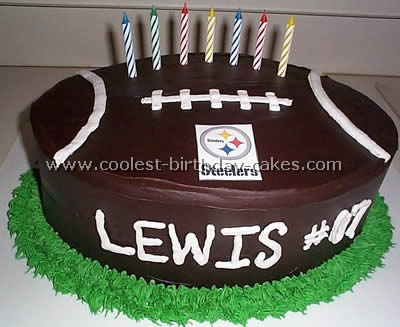 This football cake was really fun to make. I used Wilton’s oval cake pan which is perfect for football cakes; covered the layers with chocolate ganache and simply used white buttercream for the remaining decorations. I was lucky enough to find candles which closely matched the colors in the Pittsburgh Steeler’s logo. 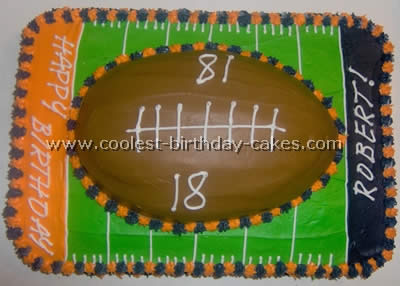 This is a white cake that represented the birthday boy’s high school football team colors. The bottom base cake is a 9X13 cake and the football was made using an Easter egg cake mold using a regular white cake recipe. The icing I used is Wilton’s white decorator icing and the Wilton colors black, orange, brown and leaf green. The base of the cake is decorated with the green icing that was smoothed out once it had set. The end zones were done the same using black for one end and orange for the other.

The football was done in the same way; I covered the entire ball after placing it on top of the 9×13 base cake and then smoothed the icing once it had time to set. The writing and lining of the ball and the field were done using the various icing colors with a Wilton #3 tip. The border of the football and the cake were done using the alternating colors with a Wilton #16 star tip. 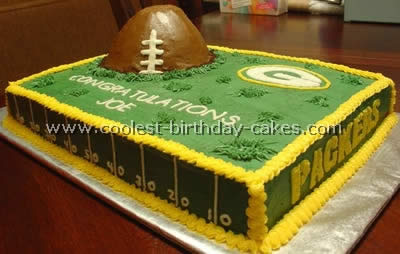 This is one of my favorite football cakes I’ve made to date and could easily be done with any sport or team. This cake was made using an 11×15 sheet cake. In addition I made two small oval cakes putting them back to back and cutting off the bottom at an angle then carving off the sides to give them a rounded edge like a football.

I put the pieces together with buttercream and set aside. For the large cake I frosted with green for the turf. I placed football in corner and frosted with chocolate buttercream then drew in laces with a #10 round tip. I used a pull-out grass tip around the football leaving about a 1/4″ gap then filled in cap with Oreo cookie crumbs for dirt. On each long side of the cake I made the yard lines then on each end of the cake I put on the Packers name. (I used the stencil font in Word and printed it out then copied onto cake).

I finished the cake with the team logo then filled in spaces with tufts of pull out grass. The zigzag border is done in team color. 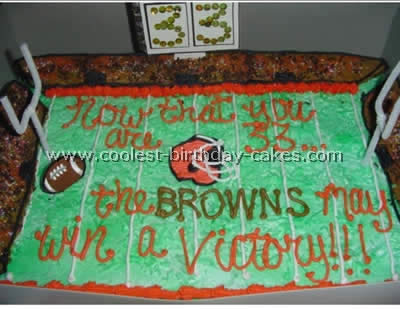 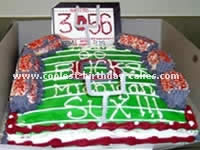 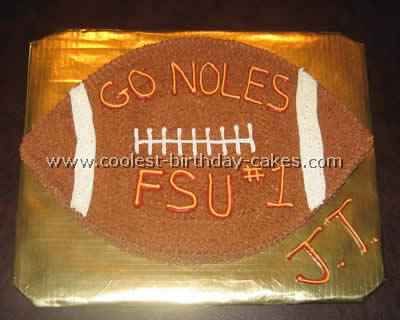 I made this cake for my husband’s birthday. He is a huge Florida State fan so what could be better than to make football cakes for his birthday. 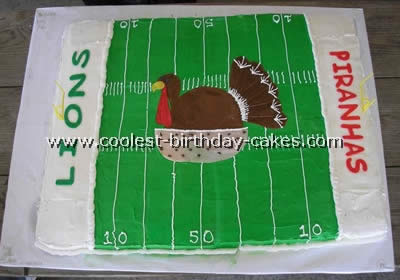 The cakes were put together with icing and then the cake was iced green and white. The turkey and bowl were made by my fiancé from fondant. The letters were cut out of fondant using stencils. I then put the letters on a white piece of fondant. The hash marks lines yards and goal posts – we’ve got a football field.

First cake I’ve ever done this size but it was to feed about 150 kids. It was worth it! 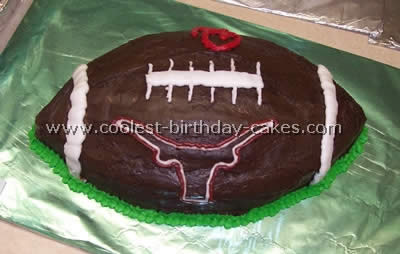 My husband is a huge Texas fan but my son is an Oklahoma Fan … two of the biggest rivals in sports history. For my son’s Boy Scout auction they decided to make football cakes together. One side has the Texas Longhorn and the other has OU. 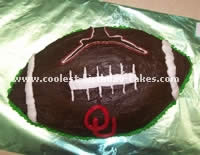