I made this fun cake for my friend’s 25th birthday! We like to drink martinis and margaritas so I thought that fun cake designs would be an appropriate cake choice. I used chocolate cake mix-two boxes but I think white would be a better choice. I say this because while I was trying to frost it some on the cake dustings kept coming through.

I used a 13×9 cake pan. I cut the top so it was flat then cut the four corners off to make the glass. I cut them into sharp looking triangles. Then I cut two more triangles from the cake as well. The sharper the corners are on the triangle the better the glass will look. With the remaining cake I cut it into 1 inch by 9 inch. These I used for the stems of the martini glasses and the bottom of the glass. Here’s where it got a little tricky because I had to cut a v in the top of the stem so I could sit the bottom of the glass into the stem. I did this so it blended well into each other for a more realistic look. The cake is so delicate and you only have an inch of width to cut as it is. Just take your time if you decide to do the v. After I placed all my glasses on the board the way I wanted them it was time for the frosting.

I used two containers of Betty Crocker fluffy frosting-not a good idea-the fluffy frosting was very sticky and hard to frost. Next time I would use anything but fluffy frosting. But I worked through it and frosted all of the glasses white. Then I got food coloring and just colored the martini glass-each one-a different color leaving about a 1/2 inch white at the top. This made it look like it was almost full! I got Twizzlers and cut them in half and stuck it in the top of the cake so it looked like a red stirring straw. At this point it still looked boring so I found an assortment of sprinkles so I used those for color.

I had party confetti -not edible-so I threw a couple of those on there too!! The confetti and the sprinklers really made the cake. Everyone loved the cake and the creativity I would recommend for any 21 and over party! It’s pretty easy to make although it does take some time to “carve” the stems and glasses. It’s definitely worth the effort to see people’s reaction! Enjoy making your fun cake designs! 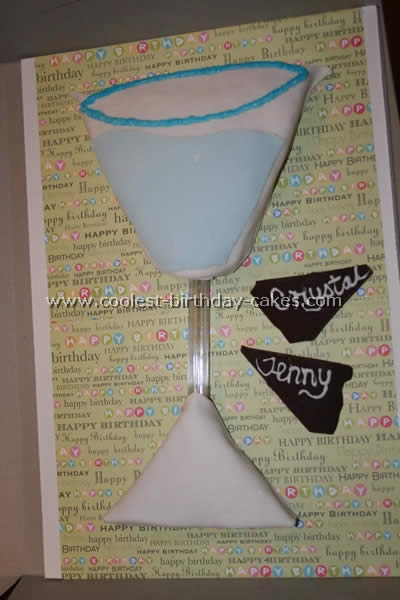 I love to work with fondant and I love chocolate martinis. I also love to make fun cake designs so I attempted this martini cake. I used a rectangular and a square pan. I cut them into triangles. I used a plastic column used for wedding cakes as the stem. It helps to use frosting to cover the cake than put the fondant over it. 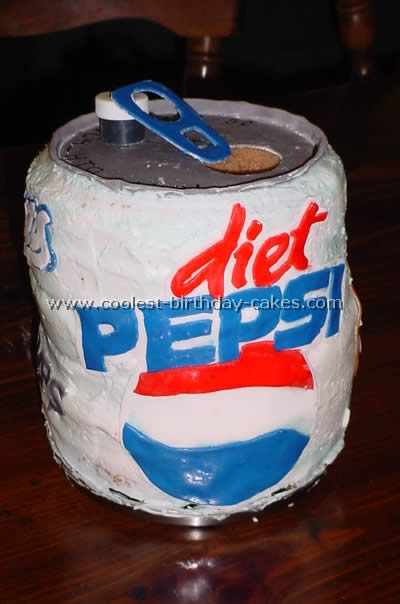 We made fun cake designs for my diet Pepsi-aholic father in law (very easy to tease a kind of guy who loves the New England patriots). I tiered this cake and put support rods all through out but for some reason perhaps fate it would still not hold, perhaps the cake was just to soft and would not support the sticks straight.

But for my father in law we teased him, it was a wrinkly old can for a wrinkly old man. I cut the patterns out of fondant that I traced the emblems from pictures cut out of paper. For the lid I cut a circle and pinched the edge to make it have the look of a can top. He loved his cake. 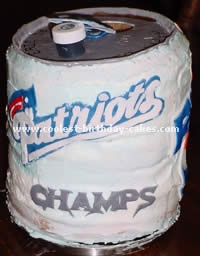 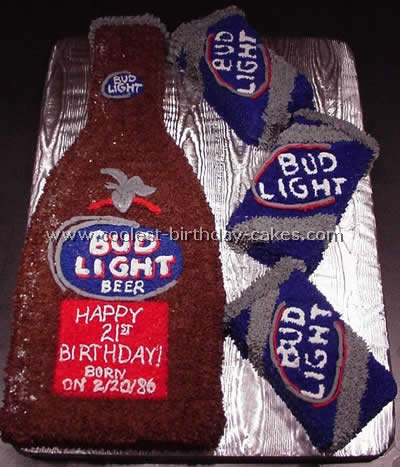 I was searching for fun cake designs when I came across this cake. The “Born-On” cake was baked in a 1/2 sheet pan and shape was cut out to mimic a beer bottle. Beer cans were made from the scrap. All pieces were iced with butter cream icing. 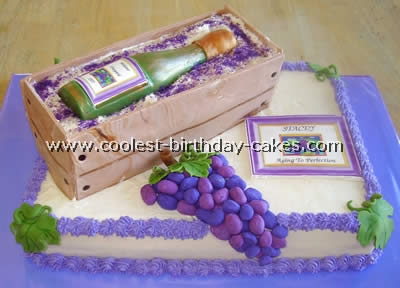 I made this cake for a friend who collected wine. The bottle is chocolate melts and the grapes are fondant. Thanks to your fun cake designs, I enjoyed making this cake. 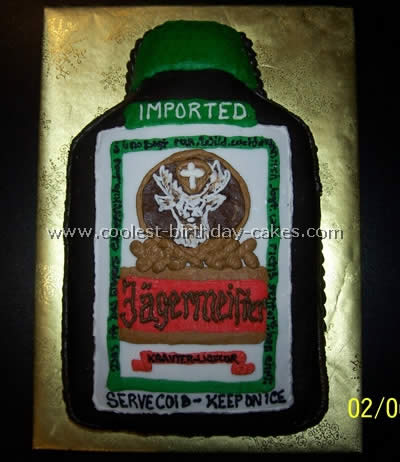 I made this cake for a neighbor turning 39. I’m guessing it was her drink of choice. I had such a good time making this cake. I didn’t want to leave it for a second. I love doing something different with fun cakes design.

First it’s just a regular 9x13in. pan. I cut it to look like the shape of a bottle. The scrapes I used to make the roundness of the bottle. Then a iced it all with butter creme icing.

I made my own marshmallow fondant and mixed in lots of brown and a little black coloring and covered the bottle. The label is also a piece of white fondant. Then I just looked at a real bottle of Jager and copied the picture and writing from it.

It really wasn’t as hard as I first thought it would be my neighbor really loved it! 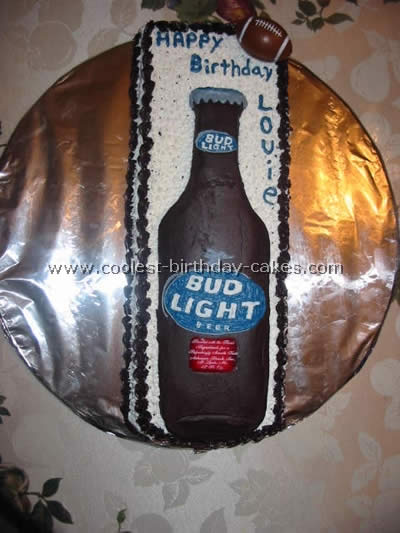 I looked for some fun cake designs so found this and surprised my son in law with this bud light cake. It was very simple. I just got a rectangle cake pan. I divided the cake in half and cut one out into a bottle shape. The bottle has chocolate icing.

After you spread the icing you have to wait 15 minutes to dry. After you let it dry you have to put a paper towel over the frosted bottle and massage the bottle all around. The lettering is also frosting. 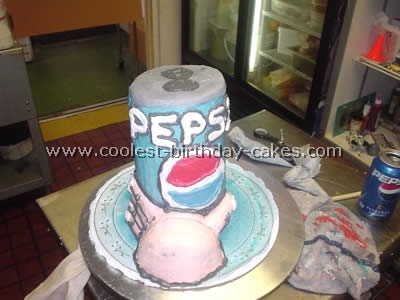 For this cake I was just bored and was trying to come up with some new fun cake designs. I was standing by my turntable drinking a Pepsi and then I thought ‘awe what the heck, I’ll make a Pepsi cake!’

The can is made out of 4 mini cakes stacked together and the hand is made out of the cake scrapes. If you decide to do this cake DONT FORGET! Make sure you cut a dowel rod as long as your cake is high. This is to help support the cake so it doesn’t fall over. This cake is made with buttercream icing. It was pretty neat because it turned out that the same day I made the cake, a lady who works at the Pepsi plant here in Cruces, came in wanting a shape cake for a potluck lunch they were having; and low and behold there was my Pepsi can! Pretty neat. 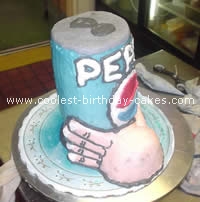 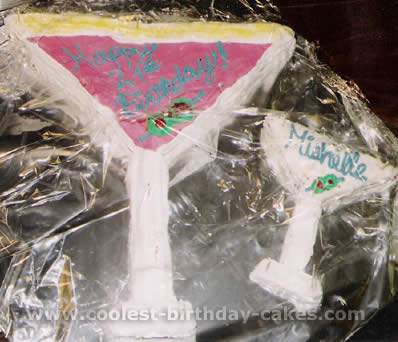 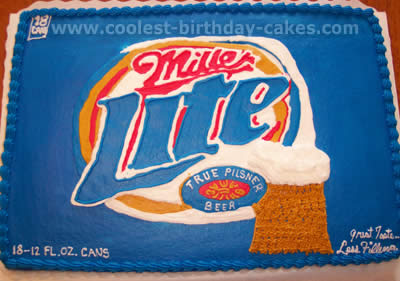 This cake was for my husband’s friend and we couldn’t think of a thing he liked more, so I took a beer box and copied it on my scanner in reverse and used the gel transfer method to get it on the cake. That is where you put a piece of wax paper over the design, trace using the gel and turn it over on the cake, and then you have a clear pattern. 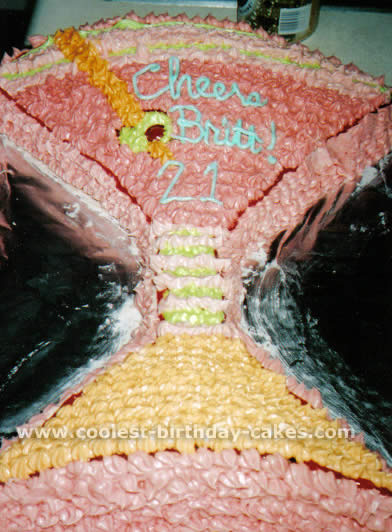 I used a 13″x9″ to bake this from scratch chocolate cake. Once it had cooled I cut the cake by making two triangles from the corners of the pan. The larger one was approximately 9″x9″x12″, and I made this the glass part. The second triangle was about 6″x6″x8.5″, and I used this to create the base. I then used some of the remaining cake to create the area that connects the glass to the base.

To frost this fun cake designs, I used piping gel to create a bit of an outline and the inside of the olive. I then used the star tip and used homemade buttercream frosting of various colors to fill in the image. This was my first attempt at making a fancy cake, and it was a great accessory to my friend, Brittany’s, 21st birthday! 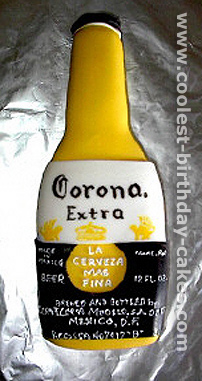 From the many fun cake designs on this site, I chose to make this beer bottle cake. I used a lemon cake, carved it into a bottle shape and covered it with icing. Fondant was then laid over in sections (yellow, white, black). The writing and artwork on the white part of the label was done with food color markers, while the writing on the black and yellow sections was done with white royal icing.