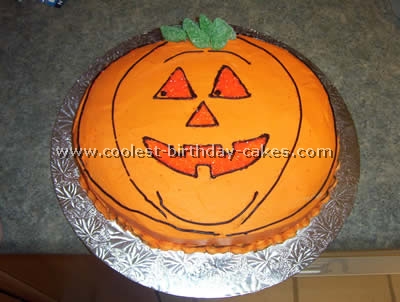 I made this pumpkin cake for the fall cake raffle at my kid’s school. I used the Wilton Pumpkin Cake Pan. I used two packages of vanilla cake mix.

I used prepared Butter cream icing and added orange coloring. Iced the whole cake and then used a black tube icing that I bought to detail the face of the pumpkin.

I made this pumpkin cake for my sons primary Halloween party made with a bundt pan covered with orange frosting. I covered a flat ice-cream cone with chocolate frosting and stuck it in at a tilt and gave it texture with a knife making lines to represent the groves on the pumpkin.

This pumpkin cake won me first place in a cake competition. The cake itself is a pumpkin spice cake from a recipe I found online and it used the accompanying pumpkin cream cheese frosting. It is made up of 3 10in round layers about 2 inches tall. Each layer was cut in half and frosted. Between each layer I used a plastic cake separator plate and a single dowel down the center.

After assembling the pumpkin cake I put it in the freezer to harden for the carving process. Once it was frozen I carved a rough pumpkin shape using a sharp knife. Then it was crumb coated with the frosting and covered in Wilton fondant (I don’t like the taste of Wilton but it gives a very nice finishing look).

First I drew the facial features into the fondant using a toothpick lightly then went back over that with fondant/gum paste forming tools to create defined features. Using an airbrush I sprayed a deep orange into the pumpkin wrinkles to make sure those were “shadowed” so they would add depth to the pumpkin I sprayed the whole surface with yellow. After that I sprayed the surface with a light orange. Finally I sprayed a brown/orange which added a lot of color depth and accented the bumpy skin surface. I made sure to spray the brown/orange around the facial features to create depth there as well concentrating on the corners of the eyes mouth and nose.

I hand painted the face black. The stem was made using a plastic cake dowel covered in gum paste dried overnight and painted yellow then green then brown. Then it was simply stuck into the top of the pumpkin.

I got my idea because as a family tradition we get together every year to go pumpkin picking and than back to carve them out. I wanted to make a pumpkin cake to take a dessert so I searched it out on the net and asked a baking friend what ideas she had for me. She told me to use a bundt cake pan for the pumpkin cake.

I made one cake mix one night and the next the following day. I iced the bottom layer while the other was cooling. Once the other layer was cooled I put them together and finished up by icing the whole cake. Than I iced it in an upward direction to get that nice finished look you see.

I used two “kiddie” size ice cream cones as the stem. Than I followed through with some green icing and laid it like the vine of the pumpkin. I don’t recommend using chocolate cake mix because it will crumble and show through the icing. I used two white cake mixes and two cans of creamy cheese icing. Everyone loved it; not too sweet!

I made this pumpkin cake for Halloween. I used: 2- Reg. Box cake mix, Orange, black, and green coloring, Wilton buttercream icing, and a Bunt cake pan. I baked 2 bunt cakes. I cut the top off of both. I put the first bunt cake upside down. I put vanilla pudding in the middle and placed the sec. bunt cake on top. I frosted the cake with the orange icing. I made the eyes and mouth with black icing and the top with green icing.

This picture is my daughters 5th birthday cake. She wanted a Halloween party, so that’s just what she got.

She kept saying she wanted a pumpkin, but I knew it wouldn’t be enought to feed everyone. So…. I made a 10 in 2-layer plus an 8 inch, 2-layer. I Iced it green, and decorated it using different objects.

For the pumkin cake on top I used Wilton’s 3D ball pan. I bought some little picks for the cake, but then what would I do for the ghost? Just so happend, I was looking at the Halloween candy in the store and they had ghost peeps! They were perfect! I put the peeps on a sucker stick and inserted them into the cake. I thought they added a nice touch. The spiders were just piped on with butter cream icing.

My little girl loved her Pumpkin cake and so did her friends. It was a hit!

This Jack O’Lantern pumpkin cake was from the Wilton pan & recipe. It is easy to bake following the Wilton directions (30 minutes exactly in the oven worked best) but I recommend using a white/yellow cake and not chocolate. The darker cake was much harder to decorate because of the crumbs and the dark cake would show through. I also recommend using the pre-made tube for the black outlining. The consistency is good and it is worth the convenience. I got two Jack O’Lantern cakes out of one tube of black. Once you do the face and outlining I recommend to start the orange in the middle and work out to the edges.

This Pumpkin cake was a lot of fun and a big hit for my niece’s October birthday.

Eyes, nose and mouth of this pumpkin cake are tootsie rolls flattened and cut. The stem of the pumpkin cake is and ice cream cone frosted green. Two box mixes were baked in 9 in. round and metal bowl (one round and one bowl baked from each mix). I layered cakes with icing between – bowl, round, round, bowl. I then frosted with orange icing using upward strokes to resemble pumpkin texture.

Cake by Anne B., Northampton, PA

This pumpkin cake was made in a Bundt pan. Make two cakes. Put icing in the middle and put the bottoms of each cake against each other. Frost with orange icing, with a small star tip. I used 2 HoHo’s as the stem. Put the first all the way at the bottom and place the 2nd one on top of that. Ice around the HoHo’s to hold them in place.

Read Trinity’s Party-Tale: The story behind the cake…

My son’s elementary school was having a Harvest Cake Decorating contest. We didn’t want to make anything gross or too spooky, so we decided on a pumpkin cake.

Using a bundt pan, make two cakes using any recipe. Invert one cake on top of the other to make a fuller, taller pumpkin. Once cake cools, frost with orange icing made with food coloring.

We added green stripes to the side and iced an empty ice cream cone for the stem. Just place it upside down in the middle of the Pumpkin cake and you’ve got a near-perfect stem!

We put the pumpkin cake on fall leaves purchased at a craft store and added baby sugar pumpkins (real pumpkins) around the edge for decoration. Best of all, it won first place!