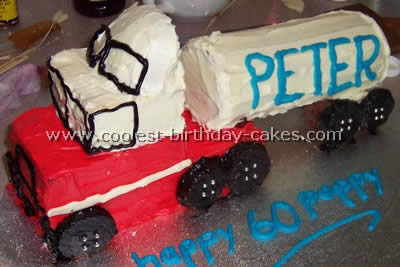 Even though this is a kids cake, I made it for my dads 60th, a copy of his truck. I made two loaf pans of vanilla cake for the truck and a baked a round cylinder cake for the trailer/tanker (I think it was nut loaf tin and baked standing up). I then cut the loaf pan cake and stacked on top of each other to make the truck.

I then stacked it all together until I was happy with the shape and then iced using cream and jam. I then placed the wheels on the side (ran out of room for the third set on the tanker) and then used black coloring for the wheels. I then piped black on for the outline of the bull bar and the windows.

I made this kids cake last year for my truck obsessed son’s second birthday. You will need one long loaf pan (Wiltons), three mini loaf pans (Wiltons), two cake mixes, two half cans of frosting, 10 Oreo cookies, one long piece of cardboard covered with foil, cut to fit the length of the truck from front to back (two small loaves side by side next to the long loaf), three blocks (I used huge legos) wrapped in foil as supports foil and a pencil to make exhaust pipes. Cake base board covered in foil.

I prepared both cake mixes in my mixer and poured about one and a half into the big loaf pan. Then I filled three mini loaves with the remaining batter. I baked them following the directions on the box but took the small loaves out sooner than the big loaf. Actually the big loaf took almost double the prescribed baking time. I just watched it carefully, inserted toothpick etc.

I put two loaves right side up side by side to make the engine/hood and base of the cabin. I frosted the cabin base layer and then put the third loaf on top to make the window portion. Next I frosted the entire cabin blue. I placed the bed of the truck (long loaf) behind the cabin and frosted it yellow. I figured out where the supports should go and put those on the cake base board. Then I moved the truck board onto the supports, strategically placing them where the wheels would need to go. (I think I taped them to the bottom of the truck to be safe).

At this point I outlined the various details on the cabin windows with white smeared where the windows were and used yellow to put on headlights and a grill. On the bed I wrote happy birthday etc. Using leftover frosting I “pasted” the Oreos onto the supports to make the wheels. I even smeared some white on them to look more real. Last I wrapped small pieces of foil around a pencil to make those pipe thingies we often see sticking out of the top on semis.

Everyone was thrilled with the outcome of this kids cake. My Dad coincidentally had sent my son a huge semi filled with hot-wheels that he opened right in front of the cake so it was quite a truck party! He loved it!

This cake had taken a very long time to do. I had made two 9×13 sheet cakes and cut each in two parts length ways and then put icing on the top of the cakes and stacked one on the other. That is how I did the trailer part and then for the front I used a loaf pan and cut the shape of the front.

I had used purple icing with a star tip and the windows I used teal icing. I used a yellow icing star tip to look like lights. I had used Oreo cookies which I had broken apart and cut the Oreo into halves and put them on the cake to make it look like wheels. I had used pretzel rods for the pips and used white icing with star tip. This kids cake was a hard cake to do.

First of all, thanks to the other kids cake enthusiasts who submitted their masterpieces – they totally inspired me! I used one 9 x 13″ Chocolate Cake (Cake Mix) cut the long way, filled with buttercream frosting (homemade) and layered. The double-layered cake piece was frosted with blue tinted buttercream frosting. I also used one Loaf pan, also Chocolate Cake. This cake was cut once into pieces that divided the cake into 1/3 and 2/3 pieces. These pieces were also frosted with blue frosting. Then assembled and attached with frosting to make the cab of the truck.

The detailed decorating is pretty self-explanatory. I found long silver candles for the smoke stack (whatever they’re called). I used red cinnamon candy decoration for the lights. The best part of the kids cake was the little picture of the birthday boy. I cut it out and laminated it so the butter from the frosting didn’t ruin it. Everyone loved the personal touch. Also, don’t forget to use the back license plate as an opportunity to put something clever. Good luck and Happy Baking! Aloha!

This cake was made out of a loaf pan and cut / trimmed to look like the front of a truck. Small Oreos were used as the wheels, toothpicks were covered with frosting to look like smokestacks.