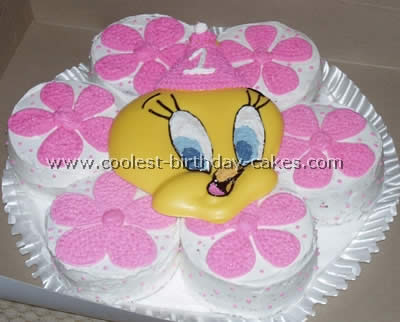 This Looney Tune Tweety cake is a lot easier then it looks. If you break it down it is just seven individual 6″ cakes frosted with buttercream frosting. I drew a flower on six cakes and star filled the flower with pink frosting. The seventh cake is under the tweety bird’s face so you don’t need to draw a flower. The face is just yellow colored melted chocolate poured into the tweety cake pan. I painted the face with the different colored chocolate melts. Very easy and super cute!

The hexagonal base is a chocolate cake, iced with vanilla frosting tinted green. The birthday gift and Tweety’s head are both orange-flavored cake (Tweety’s head was baked in an egg-shaped pan; for the birthday gift I just cut two squares of cake and stacked them on top of each other with a bit of frosting in between.)

I made some fondant and flavored it orange for all the fondant parts: Tweety’s body and features, leaves (I used a leaf-shaped cookie cutter for those), wrapping paper and bow, letters of the child’s name (used Jello Jiggler cutters for those), and orange mini-ball border.

I got the idea for the nest from an old candy recipe. I melted one bag of chocolate chips and one bag of butterscotch chips (all stirred together) and then stirred in a bag of chow-mein noodles until the noodles were well coated. I turned a bowl upside down on a sheet of wax paper, covered the bowl with wax paper, and then built the nest by dropping spoons of coated noodles to cover the entire bowl. I popped it in the fridge for about 20 minutes so that it was good and solid before trying to assemble everything.

First, I baked all the cakes, coated them with a glaze to seal in moisture and refrigerated them. Then I iced the base. Next, I made the fondant leaves and arranged the leaves on the base. Then I centered the nest on the base and pushed it down gently to secure it.

I covered the package in pink fondant and put it in the nest, as far to the front as possible. Then I took a dowel and put it through the package, nest, and base at the center, near the back edge, leaving about 2-3 inches showing at the top (Looney Tune Tweety is very top-heavy, so you need to rest his head on the package and use the dowel for support so he stays upright.)

I iced the egg and covered it in yellow-tinted fondant, then put it on the dowel. Then I added the facial features (eyes with blue irises and black pupils, black eyelashes, eyebrows, and hair) by applying the fondant shapes with a damp brush. For his cheeks, I sculpted a kind of barbell-shaped piece of yellow fondant. His body, arms, and tail feathers were also just molded by hand from the yellow fondant. I then cut out the letters of the name and put those on the front.

I added some red food coloring to the yellow to make orange fondant and molded his feet, beak, and the ball border (the beak started as a diamond shape; I pinched the straight edges and trimmed the corners to make the 3-D beak effect.)

Last, I tinted some fondant purple and formed the ribbon and bow. I thought the Looney Tune Tweety cake turned out reasonably well although it’s not completely in proportion; the eyes are too large for the head size.)