Cake by Stacy S., Linton, IN 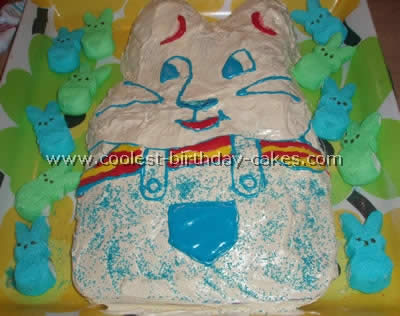 For my two year old little boy’s birthday I made this Max and Ruby cake. It was so hard to find any Max and Ruby items anywhere that I had to make everything. I used box cake mix (gasp) but it was really easy to use. I baked it in a 9×13 glass cake pan.

When the cake was very cooled I transferred the cake from the pan to the colorful tray I had. I then cut the bunny ear shape off the top of the cake. I used white store bought icing as the base because Max is a white bunny. I freehand colored in Max with piping and I used a picture of Max for inspiration. It was very easy. I put the cake in the fridge and the piping hardened nicely. Once I had the shape of Max’s ears cut out the rest was simple. I used peeps on the side of the tray. 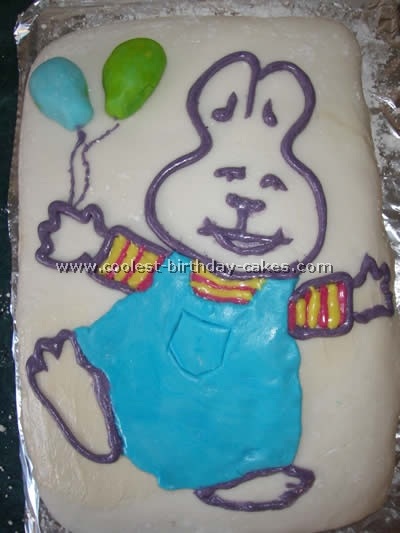 My son loves Max and Ruby so I decided to make him a Max Cake. I started out making a 9X13 cake and made MM fondant for the icing. I got the recipe online here…

I also found a couple of coloring pages from Max and Ruby online and picked out the nicest one of just Max. After the cake was baked and had cooled off I put buttercream icing on it and stuck the rolled out MM fondant on top.

I colored some MM fondant blue and used a coloring page as a template for Max’s overall. I made Max’s body out of purple icing (I didn’t have any black icing). I colored some of the remaining MM fondant green and still had some blue left and changed those into 2 balloons for my son’s second birthday.

I colored Max’s shirt in with yellow and red buttercream icing. To finish it off I added some licorice for whiskers and added blue stars on his pocket for interest. I also added 2 candles one on each balloon. 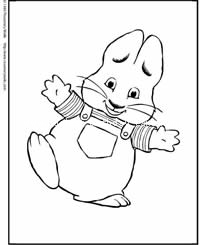 Unfortunately I didn’t have a picture of the finished result (I’m missing the whiskers, the stars and the candles) cause I added those just before I presented the cake to the guests. I do have it on Video though. Everyone loved the cake especially the kids. And my son still talks about his Max and Ruby cake. 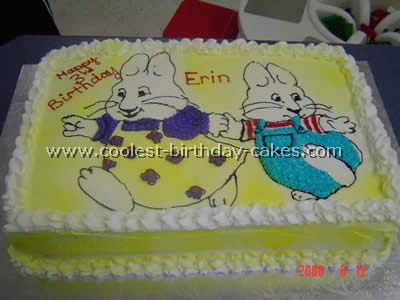 A friend of mine wanted a Max and Ruby cake for her daughter’s birthday so I decided to tackle the project. I baked the cake and then frosted it with Buttercream icing. I then let it sit for about 15 minutes to slightly harden and then used parchment paper to smooth the cake.

I traced the Max and Ruby picture onto parchment paper and ran out of piping gel so I laid the picture on the cake and outlined it using a toothpick. The piping gel would have worked much better. After I had it outlined I drew it using black piping. I also used the spray on color to add some yellow to the background as well as Ruby’s dress.

I started with a rectangular cake. I printed the image off on the computer, and placed it on to the cake. I carved around the paper to shape the cake. Then, I iced the cake using butter cream icing.