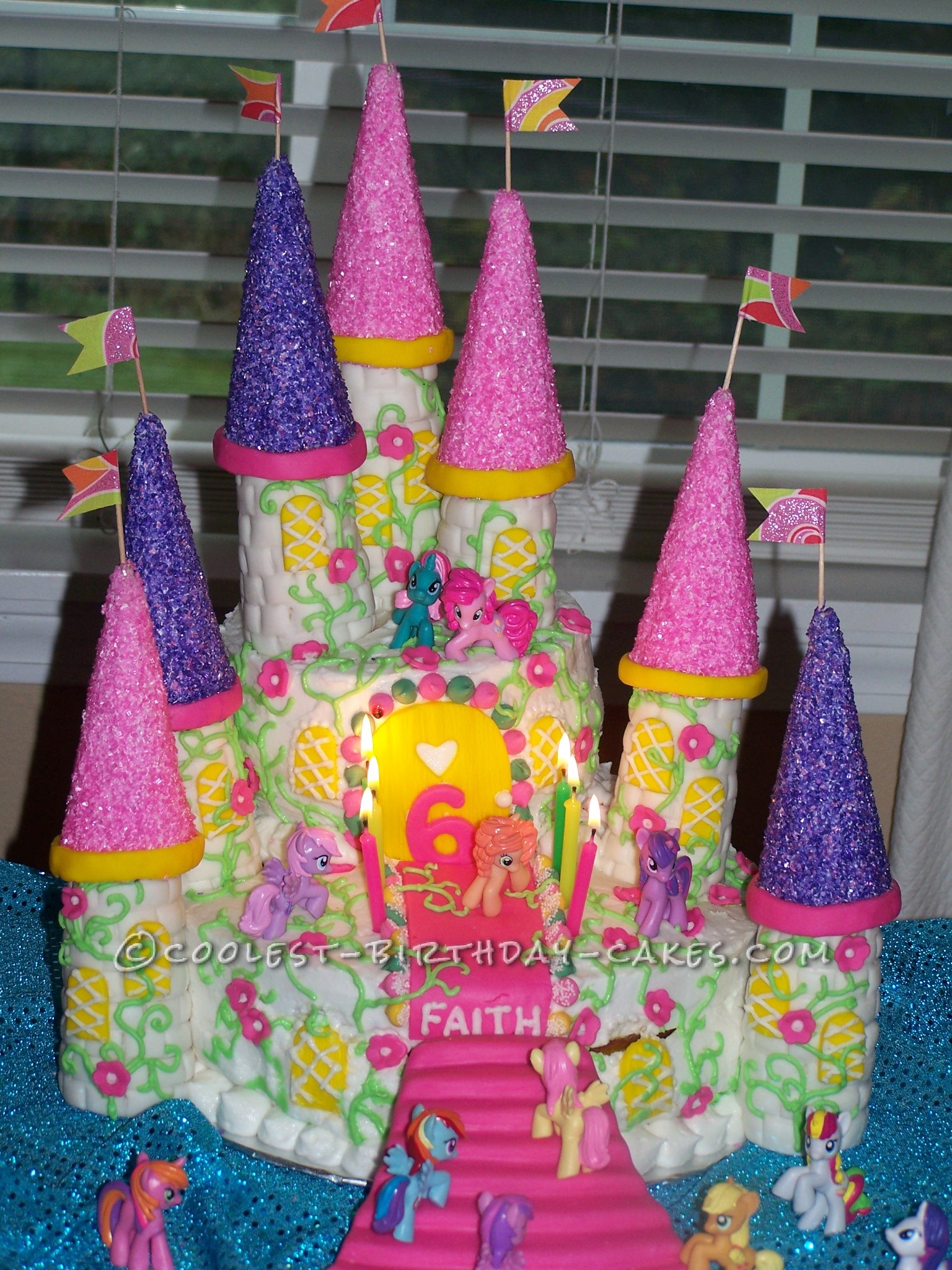 This My Little Pony castle cake is made of 2 10″ layers; 2 5″ layers, 7 turrets, and a set of stairs.  The cake layers themselves were colored pink and yellow to match the outside. The turrets are made of rice krispie treats; the turret roofs are sugar cones covered with a thin layer of royal icing and rolled in colored sugar.

The stairs are made of shaped sugar cookies, stacked, and covered with fondant.  Use a no-spread sugar recipe recipe. I Googled for one.  I made a paper pattern to fit the entry of the door and the height of the cake.  I cut out the first cookie and then cut 1/2″ off the pattern before I cut the next cookie out.  Repeat as necessary and then bake the cookies.  Careful!  The smaller cookies will cook faster than the larger cookies.  As soon as they were out of the oven, I carefully trimmed them with a small sharp knife, then let them cool before frosting with a very thin layer of frosting and stacking them.

I did a crumb coating on the cake the night before to make it easy to frost on party day. I used homemade marshmallow fondant to cover the turrets and stairs; and also to cut out the tiny flowers, windows, door, number 6, and the walkway.

I made the turrets by shaping the rice krispie treats a few days ahead of time and freezing them. You can also make the “roofs” ahead of time.  When I covered the turrets, I cut the fondant to shape and used the back of a knife blade and a small piece of matt board to make the “brick” pattern.  The windows and door were attached with a little frosting.

The vines and window detail were piped with a #2 Tip.  I used Wilton’s Snow White Butter cream Frosting recipe, included with their meringue powder.

To Assemble: frost the cake and support the top layer. Attach the windows, door and walkway. Pipe the details and add flowers. Add turrets and put their roofs on them. I stood each turret on a bamboo skewer to keep it stable.

The 2″ My Little Ponies are from Toys R Us and can be ordered online. I made the little flags from fabric scraps and toothpicks. I like to cover the cake board with beautiful fabric that contrasts with the cake. 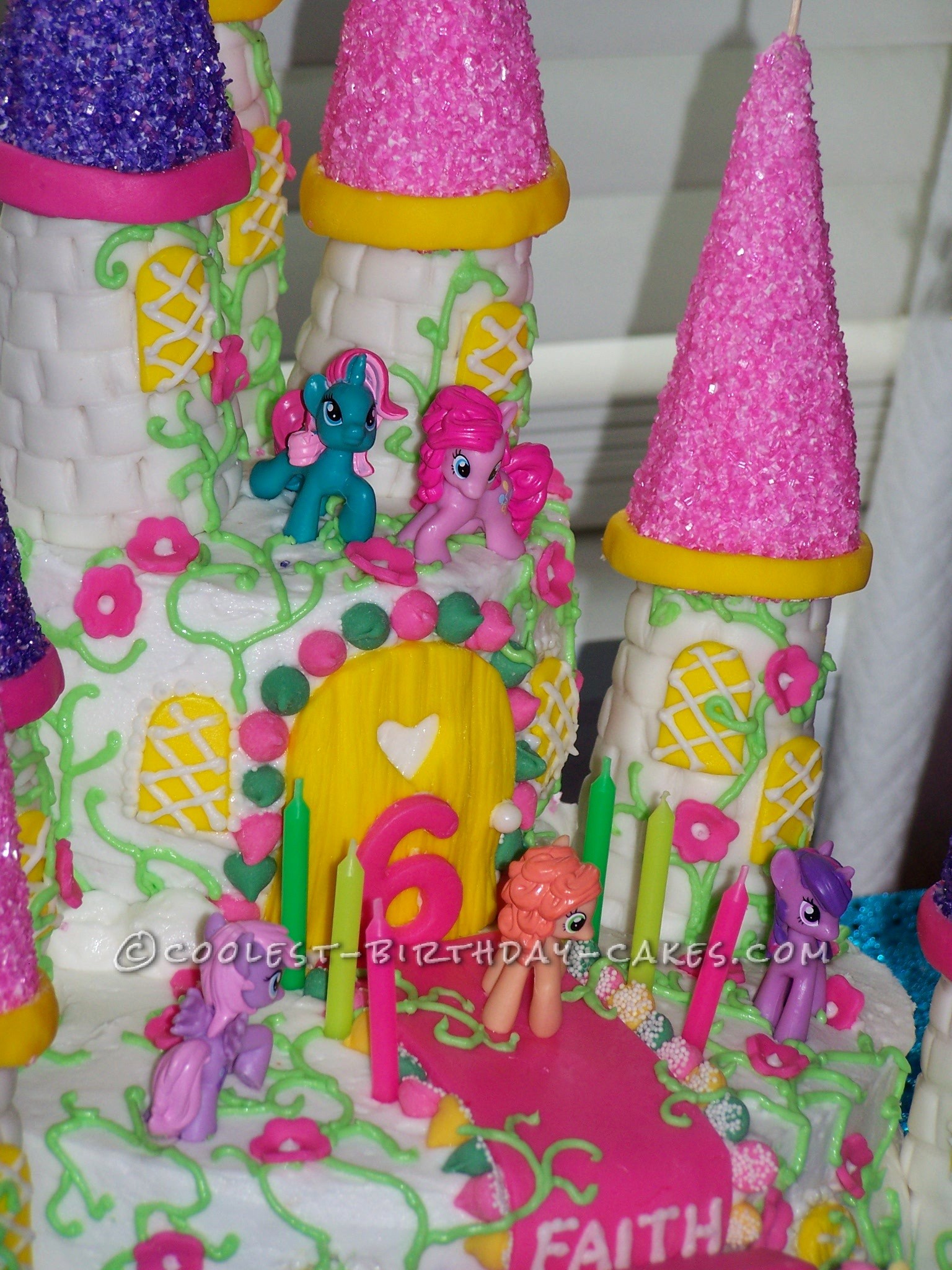 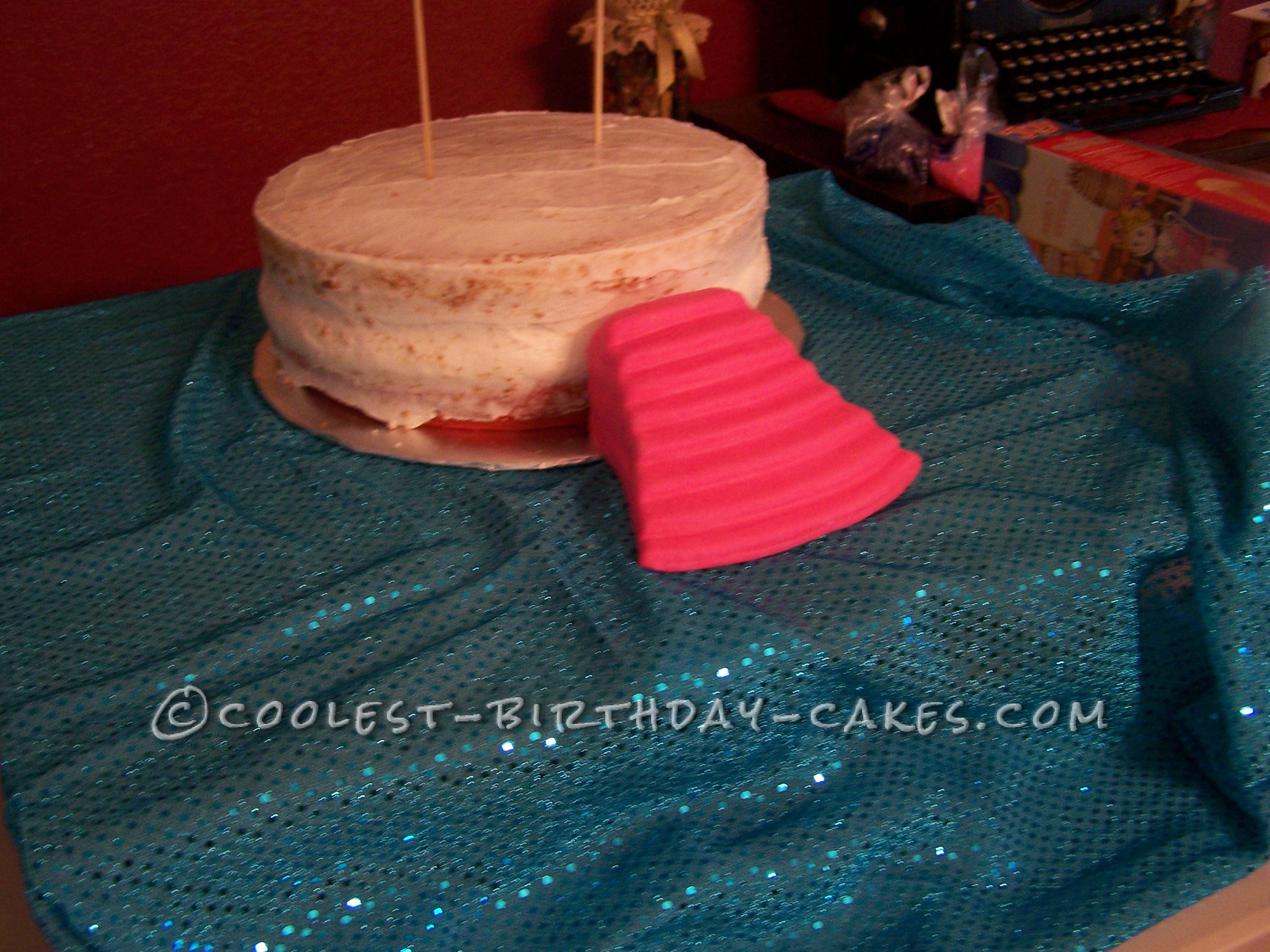 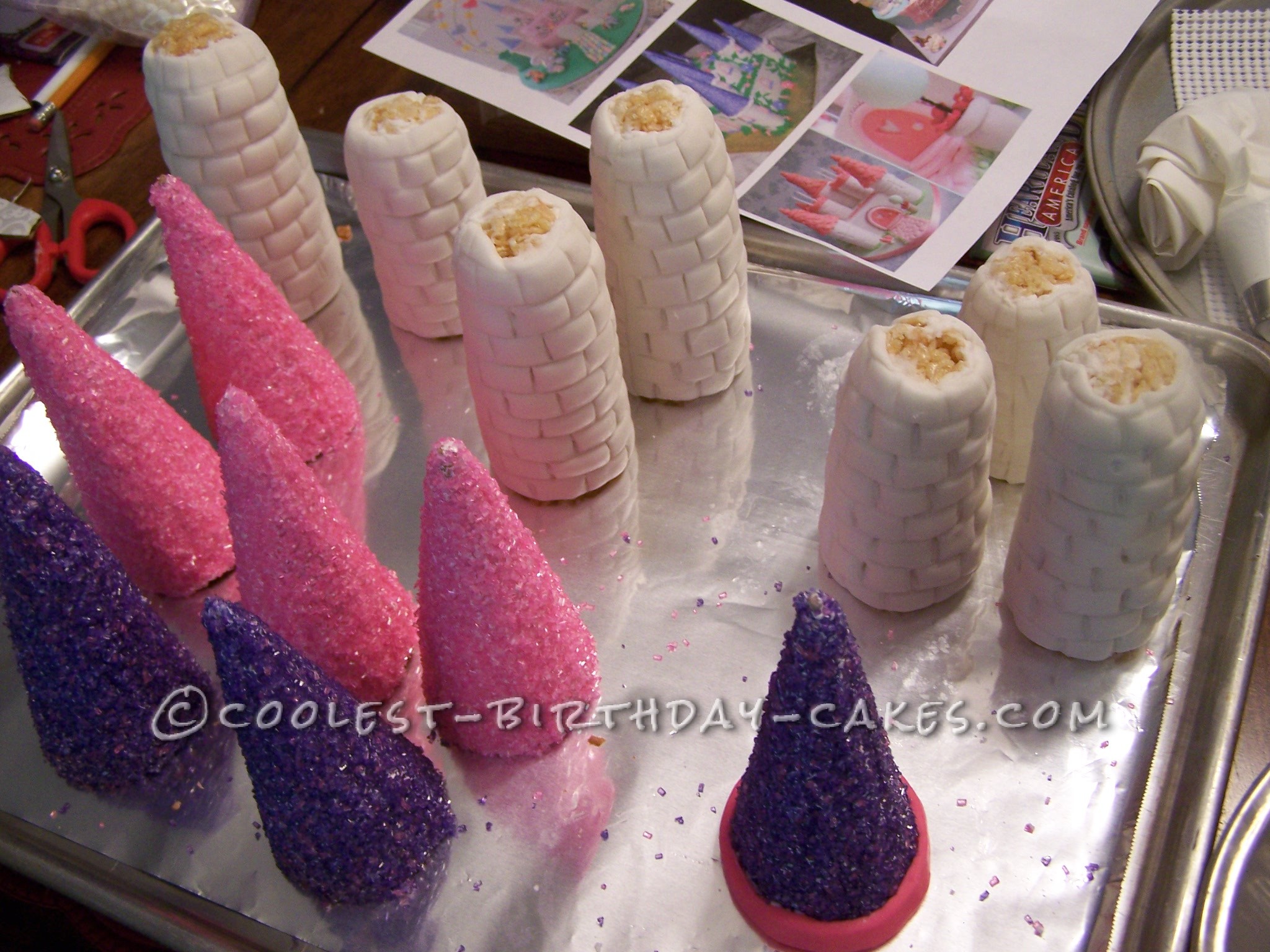 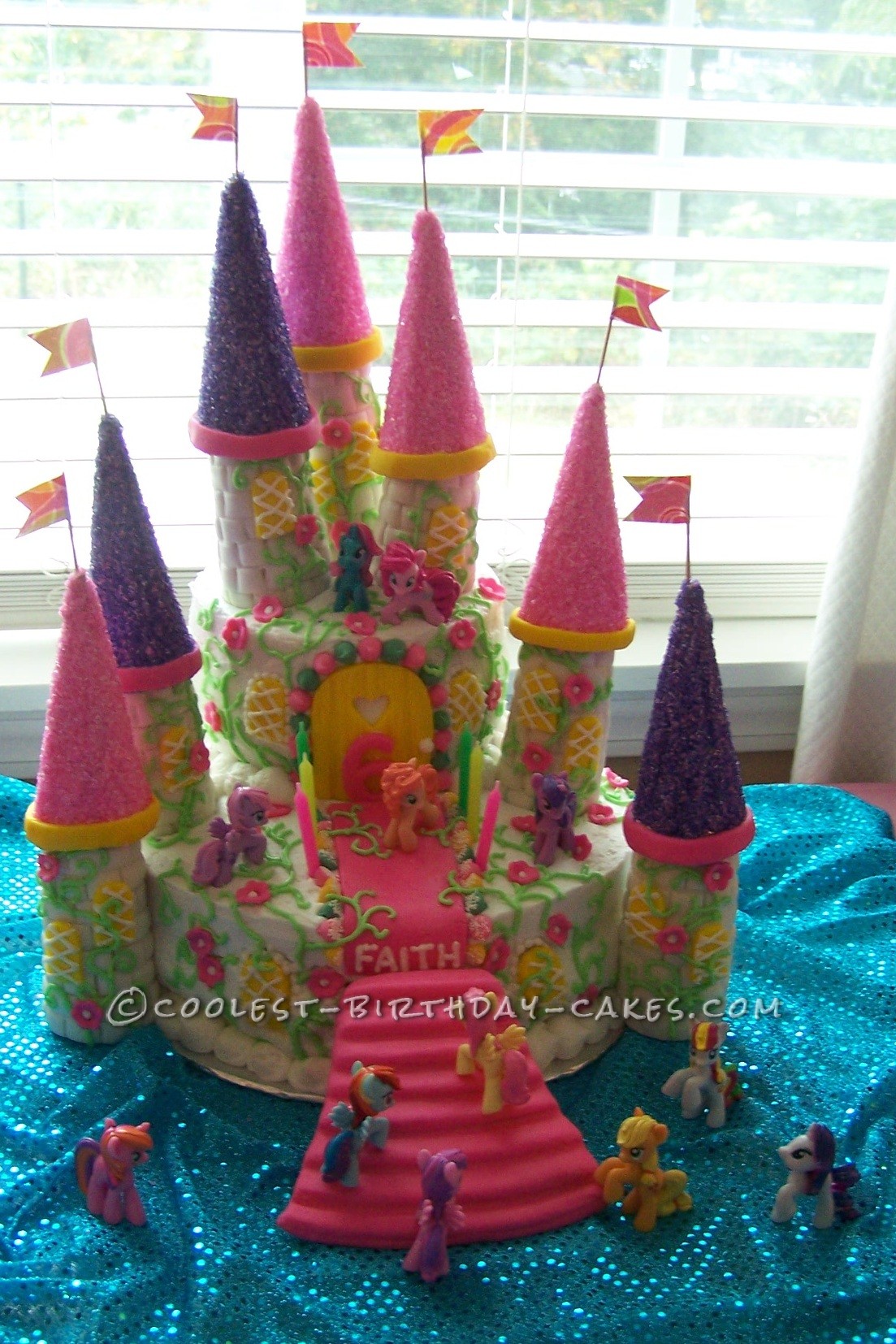