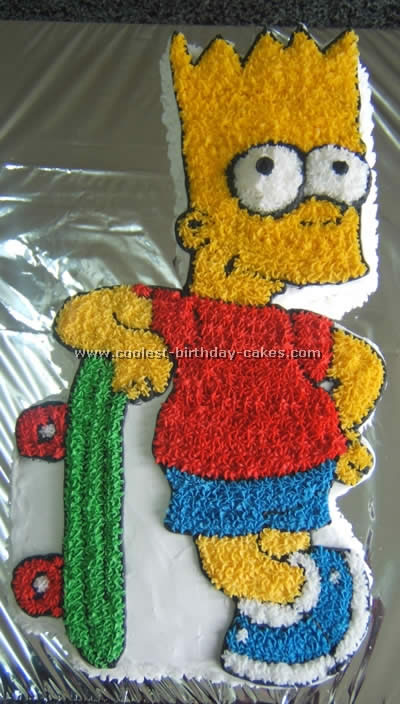 I got the idea for this cake from this site. I got the Simpsons picture off the internet then enlarged it on the photocopier. I made a large rectangle cake then cut out the shape. I covered the side first with buttercream icing. I transferred the pattern onto the cake using a metal skewer to mark holes on the cart. I did the outlines in black and filled in with the colour areas with buttercream stars.

Simpsons Valentines Day cake copied from a Simpson’s picture. Three layers of carrot cake with sweet cream cheese filling and frosting. I decorated with a rose molded out of chocolate and Marge and Homer Simpson drawn with colored chocolate.,

This was a really easy and quick cake to make, my first shaped cake. I found a Simpsons picture that I liked and enlarged to fit my tin, approx 12″ x 8″. I then cheated and cut out the Homer print and placed on the sponge cake and cut the shape out.

I then cut the picture in to three pieces, his shirt, his eyes and his mouth. I then arranged them on the cake and drew a line with a toothpick so I knew where to put the icing. This took me about 20 minutes to decorate.

Cake by Jessica P., Portland, ME

This cake was for a friend’s birthday party and I was asked to make something to do with Homer Simpson or Twinkies. So I decided to be creative and combine the two! Instead of Homer saying “Mmm..Donuts” he is thinking “Mmm…Twinkies” while gazing at a 20 Twinkie tower!

This cake was made out of four 13×9 cakes along with two 10” rounds for the thought bubble and the Twinkie tower. I copied Homer from a Simpsons picture. I used fondant and butter cream for the cakes. I also used fondant for Homer’s eyes and mouth. And believe me the biggest challenge of all was finding the perfect Simpson yellow-orange!

This started as an 8” square cake and copied from a Simpsons picture. The back has to be trimmed width ways and placed on the seat. The seat x2 gives your sofa a bit more height if you need (I didn’t) and the arms are trimmed to shape and placed on the seat too. Stick the whole thing together and fully cover with buttercream then chill until hard so it stays together when you sugar paste it!

Start at the front and work towards the back so you can hide any folds in the sugar paste! After that it’s just lines pressed in using a straight edge to make seat and arm details and seat buttons made by pressing a small hole cutting a cross around it and pushing in tiny sugar paste balls to the hole.

Homer was built in stages: a sausage shape folded in half for legs, teardrop shaped body and two smaller ones for sleeves. Sausage shaped arms trimmed to fingers at the ends. His head is an elongated ball with the details all stuck on. The rug was made by cutting holes into orange-brown sugar paste filling with next colour and rolling gently to stick them together. Duff cans are tiny red cylinders; grey tops, white ovals on the front and details painted on in black food colour paste. TV remote is grey sugar paste with button details pressed in with a knife.

I decided to make a box cake because I only had a couple hours to put this together before my boyfriend came over. It was his 22nd birthday and I always wanted to try to make a cool cake and thanks to this website it inspired me. I chose a Homer Simpsons picture because that’s my boyfriend’s favorite character, chose an appropriate picture of Homer Simpson and blew it up on Photoshop then printed it out.

I tried using the wax paper technique however I had trouble transferring it and it ripped off half the icing so I re-iced it but some of the crumbs showed through. Then I just drew the picture free-hand with the gel icing looking at my picture I printed out. I filled it in with a star-tip using disposable pastry bags in the appropriate colors. I think it turned out pretty well minus the crumbs.

Needless to say when he saw the cake he had this huge smile on his face so I think he was very pleased!

Get a template pattern of a Simpsons picture from a kid’s coloring book, the internet or anything. Print out the picture to desired size and cut.

Buy a sponge slab or make one. Using the template cut the cake out. Mix butter icing or use Betty Crocker pre made icings. Color the cake to desired colures using the Simpsons picture template as a guide. Apply colures to form the cake design. Finish by using a cake decorating gel pen to out line the cake and add finishing details.

One of my son’s favorite shows is The Simpsons. So for his 15th birthday that’s what he wanted for his cake. For the cake decoration I made an outline copy of a picture I found of the Simpsons family on a piece of plain white paper.

I covered it with wax paper and traced the picture using royal icing in appropriate colors. This was my first attempt at making a decoration that was to be placed on the cake instead of decorating the cake directly.

I frosted the 9×13 cake first with a butter cream icing in my sons choice color of blue and then placed the royal icing decoration on top. I had a few problems peeling the wax paper off and transferring it to the cake but it turned out pretty good.

My son was really pleased with his Simpson cake. You can also use another Simpsons picture with the same technique, it’s not hard at all.