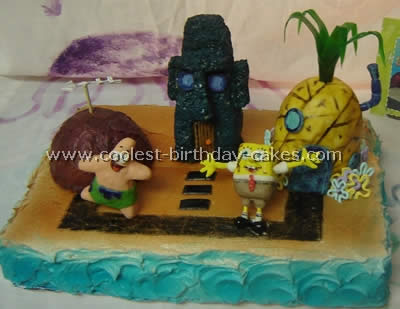 For my son’s third birthday we did a SpongeBob Themed Party. The inspiration for the cake came from a SpongeBob picture on a postcard on the back of a coloring book that I had saved. The cake is a two layer sheet cake (two Devils food cake mixes) and the pineapple is made of pineapple cake (if I did this again I would make it from Rice Krispie treats) covered in fondant. The leaves are made from fruit roll ups (two strips with a small wire between them for support).

Patrick’s house is made with the cake mix as well. Squidwards house and the Patrick and SpongeBob characters are made from rice krispie treats and fondant as well. I frosted the cake with buttercream and used my air-brush gun to paint the cake and Patrick and Squidwards homes. I made the flowers around SpongeBob house with royal icing. The details like the windows, doors the chimney (wired) and characters eyes were all made with fondant and painted by hand.

I made this cake in stages starting this cake on a Wednesday (baking all the cakes and forming the rice krispie treats, frosting and spraying the colors on Thursday and all the details on Friday. Not sure how many hours I actually spent on it. I’m a stay at home Mom and also do childcare in my home. Anyways the cake was a hit and the little critics said it tasted great! Oh yes, the middle layer of icing was Root Beer flavored.

My cousin was having a campfire party and loves SpongeBob.

She was the one who came up with the idea of the two on the cake together taken from another SpongeBob picture she saw in a magazine. The tent was a Graham cracker, the pineapple was a cake covered in candy, SpongeBob and Patrick were made out of fondant and the campfire was pretzels with buttercream icing. The cake was a hit!

The cake (9″ x 13″) was made using two boxes of vanilla cake mix sandwiched together with some ready-made vanilla frosting. I colored the rest of the vanilla frosting with green, red and yellow color pastes.

I covered the cake in fondant that I had tinted blue and brown with color paste. SpongeBob, Patrick, Gary the snail and jellyfish were ready-made sugar figures.

The bottom of the cake was surrounded by crushed biscuits (sand) and gummy crocodiles, worms and chocolate coins. I made treasure chests with bite-size Snickers bars, yellow M&Ms and yellow frosting (for handles and lock). The creatures on the cake were made with M&Ms (you could also use Skittles) and colored frosting. The seaweeds were piped in green frosting.

For my son’s 4th birthday he wanted something with Spongebob and my mom had some little decoration pieces (the tree and character) she had picked up at a party store. I knew I wanted to create a “scene” rather than character.

I started by Googling “Spongebob pineapple images” (you have to click on it to see ALL SpongeBob picture images). This gave me an idea of what his house and surroundings looked like.

Then, I baked 2 square cakes and one small square (I used the deeper, professional one – I think it’s 6″ square – just play with what you have). The 2 larger squares I layered one on top of the other with filling and frosted the top with light brown frosting. The sides I did in blue for the water. Then I cut the smaller square in half diagonally to make 2 triangles. These, I folded up back to back to make a sort of pyramid shape. You have to glue them together with frosting and then shave down the top and sides to make a rounded pineapple shape. I frosted this in a light yellow with darker yellow crisscross and set it in the corner.

For the sand I crushed up graham crackers and sprinkled them over the frosting around the pineapple house (if the frosting hardens it won’t stick to the crumbs so just mist it with water and wipe over with a knife before sprinkling).

For the pineapple top I used leaves from an Easter Lily with the bottoms wrapped in foil (just to be safe in case they’re toxic) and just tucked them down into the frosting. I then piped around the edge with frosting to hide the foil.

The door is a Capri Sun drink cut up and inside out and the walkway is made with Smarties. I used those little sugar dots that come on paper strips to decorate and add color around the pineapple and around the sides of the cake.

I decorated with sea grass, but in all the pictures there is funky tie-dye looking flowers, which would also be fun. Spongebob’s house also has a chimney pipe and a window so you could play around with some foil things for those. Basically, just go with what candies you have and focus on colors, textures and things that could double as something else.

I made this cake for my husband on the evening before his birthday while he was on nights, with only a few hours before he came home I got out all of my cake tins to see what I could make for him, I saw the bell cake tin and I knew what to do instantly.

Using a straight forward sponge cake recipe I made the cake, while I waited I mixed up a middle sized pack of ready roll Icing orange and I took another pack and split it into 4, I mixed them in to 4 separate colours, pink, yellow, green and blue. I first made Spongebob then Patrick and other extras like the windows and door and pineapple leaves.

When the cake had cooked and cooled I cut it into slices and built it back up with jam and butter icing. Rolled out the orange ready roll icing and covered the cake with a thin layer of butter icing before carefully putting the orange Icing over it. I then added all my extras and drew lines on the cake with a red cake pen. In the morning when my husband came home he was trilled to bits with his cake.

We all love SpongeBob at my house so this year we decided to make his pineapple. I love to make domed shaped cakes with my Pampered Chef batter bowl so I am always trying to think outside the box and come up with interesting cakes.

I baked 1 box cake in my batter bowl and cut it into 4 layers. I made a large batch of buttercream icing and tried to color it somewhere between yellow and orange. I also colored some of the icing light blue and dark blue for the doors and windows and brown for the crisscross on the pineapple. I put the icing between each layer and then all around the cake, and then made the crisscross pattern, doors and windows.

For the green leaves I used art foam that comes in sheets in the craft department. It was sticky on one side so I put two sides together and toothpicks at the bottom to hold it in the cake. For the pipe I used PVC pipe and covered it with icing. I put it in the freezer and left it until we were ready to cut the cake.

I found a SpongeBob bendable figure to use in front of the house but later found a SpongeBob candle that I liked better so I used it instead. Next time I will use two cakes (to make it taller) but I didn’t know that I needed another one until 10:30 pm when I started decorating the cake.

I made a traditional 2 layer cake, but used different shades of frosting for each layer, including the top. It gave it a nice ocean feel. I bought a generic Spongebob cake top and used dark green icing to draw by hand the sea looking plants. I used white icing to look like bubbles of air. Very easy and everyone loved it!

We made a 2 tier cake, and then cored a real pineapple. Very easy, very cute!!!!

Spongebob picture cake by Martin A.

This Spongebob picture cake is pretty easy to make. A day before, prepare the fondant flowers. Roll different color fondants into long strands and shape them to look like flowers. Leave to dry. Prepare the signboard.

I used paper and stick it onto ice-cream sticks. Laminate a Spongebob picture and Patrick. Prepare a sheet cake and small round cake (I used an empty can). Cover sheet cake with peach butter cream and add winding road in grey. Spray with food coloring if desired.

For this SpongeBob picture cake I started by drawing the characters on a piece of paper. (Tracing would work too.) Then I taped the drawing to a table and taped wax paper on top of that to make sure it wouldn’t move as I filled it in with icing. Then I made a buttercream frosting in all the right colors and ‘traced’ the drawing by outlining with a fine tip in a slightly darker color, then filling in with a small star tip.

This was a bit tedious and I recommend you do this a day or two before you need to make the cake.

I placed my picture into a flat Tupperware container and froze it until I needed it.

Next I baked 2 sheet cakes and filled it with a pineapple filling. (A good tip to filling a cake is to freeze the layers first, then slice while frozen. I squared off the cake tops as well and then filled the layers.) I then covered the cake in blue and green buttercream icing and then took a pineapple and cut the outer skin off.

I piped around the Sponge Bob characters with the appropriate colored icing to hide any visible wax paper and added all the other icing decoration around the cake.

I wrote the theme song along the sides of the cake.

My final touches to the SpongeBob picture cake was going down to the beach and finding small but interesting shells. I first soaked the shells in a bleach water solution for about 10 min. Then I boiled them for another 10 minutes. Satisfied that they were sterilized, I arranged them on the cake.

One day ahead of time I prepared the seaweed, pineapple spines, flowers, and smoke stack out of royal icing and let dry over night.  I also made all the characters out of chocolate with lollipop molds the same day.

The day I put the Sponge Bob picture cake together I used a 11×15 cake pan and a wonder cake pan.  This gave me the base of the Spongebob cake and the pineapple shape for Spongebob’s house.  Icing was mixed to get the correct under-the-sea color schemes and garnished with brown sugar to give the effect of sand.