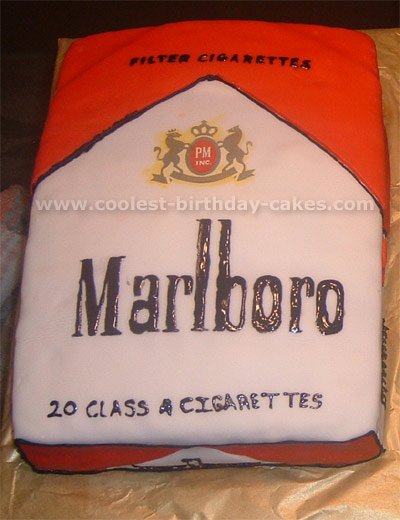 My aunt and uncle were retiring this past July and since they are smokers it was just logical that this smoking cake would be a hit with them (and it was the first thing that came to mind).

It is basically two sheet cakes stacked with filling in the center. Fondant icing was used to mold the shape of the Marlboro box (red/white). I then used gel icing along with a stencil I made of the words (Marlboro) that are on the box and filled it with black.  I even put the bar code and a surgeon general’s warning! :-)

The funny thing was that my cousin had to keep telling people not to touch the cakes because they thought they were pillows – no one could believe it was a cake.  This poor smoking cake didn’t get to the chopping block until about 10:30pm because no one wanted to cut it!  I hope you enjoyed my homemade cake recipes! :-)