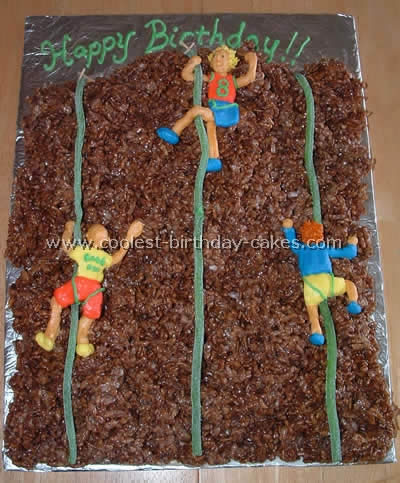 Not your typical cake- but they ate it up! This was a birthday at a rock-climbing place. I used cocoa rice krispie treats, and left them a bit bumpy to imitate the rock wall. Then I used sour straws (anchored at the top with toothpicks) for the ropes, and made icing people hanging from them.

Thanks to this site for such a great variety of sports theme cakes. I copied my idea from here! 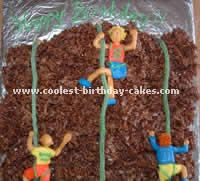 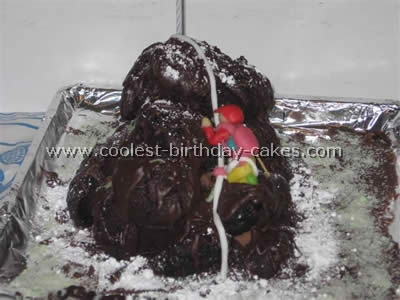 I made this cake for my brother-in-law’s birthday. I was trying to think of sports theme cakes, which wasn’t childish (he’s in his twenties) and I know he loves rock-climbing so I thought I’d give it a go!

I made about 20 chocolate cupcakes (you can make more or less depending on the height of the cake). I covered a tray in foil and spread choc frosting and sprinkled green-colored coconut. I made a ring of cupcakes and glued them together with choc frosting I filled the middle of the ring with cupcakes too for added stability. I then piled on more cupcakes gluing them with the frosting I broke some in half and used some mini-cupcakes to give it a more “rocky” uneven look.

When I had the size I wanted I poured warmed frosting (fudge consistency) over the top and then sprinkled icing sugar for “snow”. I also sprinkled some icing sugar around the base of the mountain to make it seem “in the clouds”.

The mountain climber I molded out of colored marzipan that I bought at a specialty store. You could use a plastic figure too. I used toothpicks for stability. The rope I made out of fondant icing. It really did not take long to assemble and he loved it! Because it was made of cupcakes we didn’t need a knife we just broke it apart. All in all a huge success! 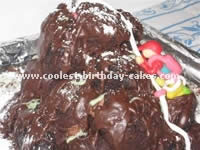 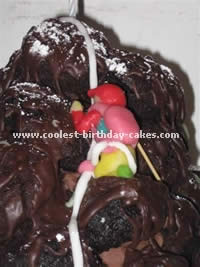