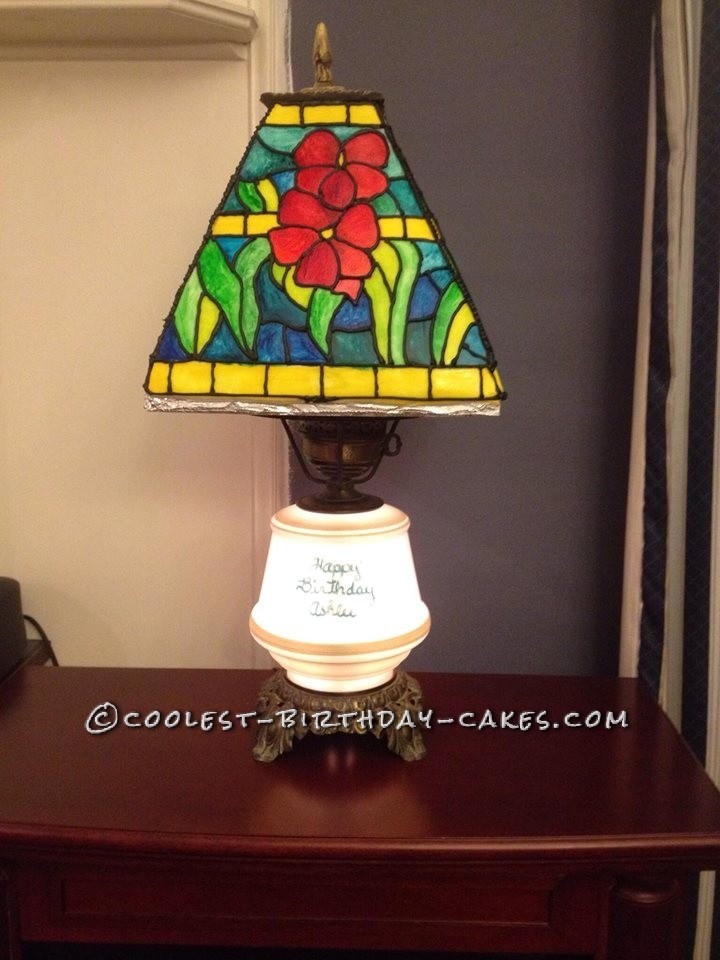 As a self-taught “cake artist” that is still learning, I always try new techniques when I bake for my family members. Any flops are forgiven so I am able to relax and enjoy the creative process.
My brother Scott’s wife Ashlee loves all things antique. She has a lovely sense of style and a beautifully decorated vintage home. She is also intelligent and well spoken. Rarely at a loss for words, she spoke only two in reaction to her birthday cake  “Shut.    Up.”

And then just stared at it with her jaw hanging.  That was all the thanks I needed, but when she recovered I got plenty of hugs and praise.

The first new technique I tried was making a pyramid shaped cake – or rather, a truncated pyramid if one is being geometrically correct.

It was remarkably easy! I baked two marble sheet cakes and then cut seven squares in graduating sizes from four inches to eleven inches. I filled them with butter cream icing and stacked them concentrically, biggest to smallest. I chilled the cake overnight and in the morning, making one angled cut down each side, I cut from the top edge of the topmost layer in an angle down to the bottom edge of the bottom layer. Four cuts and that was it. I traced a pattern of one side of the pyramid  onto tracing paper and on it drew the design of the stained glass pattern I would use.

Then I iced the whole pyramid in butter cream frosting, smoothed it with a damp spatula, and then using my tracing paper pattern, cut four trapezoid shapes from white fondant for the sides. I found this easier than draping the whole cake in fondant and this way I could work with more thinly rolled fondant. I’m not a big fan of the taste or texture of thick fondant and as a result it didn’t overpower the butter cream. 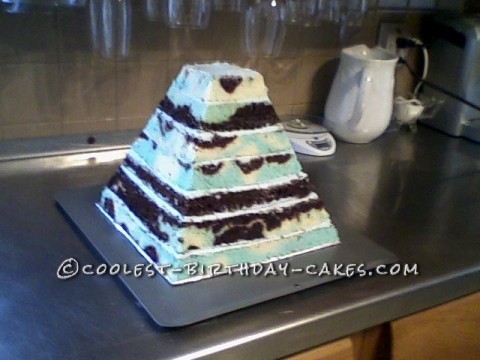 I copied the stained glass pattern onto the fondant using food markers and then tried another new technique; painting directly on fondant with gel food colors. I was careful to shade each shape in the design for a more realistic stained glass effect. Then I used black royal icing for the lead, and shaped a fondant finial and base plate out of brown fondant. I pressed in a design with gum paste tools, and then antiqued it with gold cake spray. 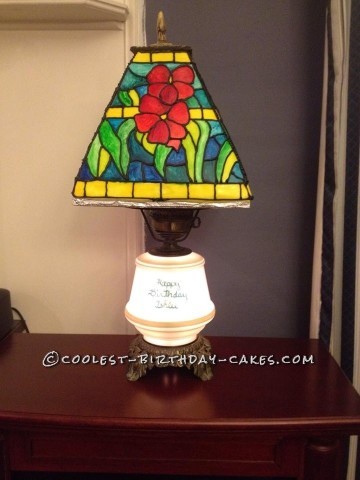 Displaying the cake with a base

I made a lucky find at a thrift store: this vintage lamp base for $2.98! It made me especially happy to repurpose an old fixture because Ashlee is the penultimate recycler! Throughout her home she has created beautiful and cleverly useful items from “found” objects. A old fabric shoe organizer hangs from the fence and holds her herb garden. A pair of removable French door mullion grids were painted pale pink, draped with tulle and miniature white light strands, and hung individually over the twin beds of their seven-year-old twin daughters.

This lamp was perfect! Topped with a ring of brass that once held a large hurricane globe (the loss of which probably caused the lamp’s donation to the Amvets) the lamp would hold a cake that size with little alteration. The lower portion of the lamp base was lit with a single night light bulb, but I disconnected the wires from the upper socket. I planned to set a foil-covered plywood cake plate on top of the brass ring and light socket but I didn’t want it to cause a shock or catch fire – I’m a fan of extreme cakes but not THAT extreme!

The lower globe had originally been painted with a rather dated floral motif. I sanded this off the glass and wrote “Happy Birthday Ashlee” in wipe off marker on it.

As each of the party guests arrived they went looking for the cake – and couldn’t find it! It blended right into the décor of my brother’s center-entrance colonial home. Cell phones popped out and pictures of my little cake were posted to the internet multiple times within minutes.

My brother chose an unusual location for the placement of the candles, but the effect was truly dramatic when the lights went down.

4 thoughts on “Stained Glass Lamp Cake that Lights Up!”