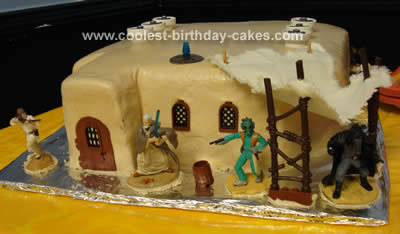 I baked this Star Wars cake for my son’s fifth birthday. He wanted “Star Wars” figurines and “Mos Eisley Cantina” is his favorite scene. The cake has windows added for detail but the shape is the same as the actual cantina. I baked two 1/2 sheet cakes then leveled them before stacking. Once together I used an Arial picture of a Lego replica of the cantina that I found on the internet to carve the layout. It is best to mark the cake with a knife or something because you can’t go back and add it if you mess up.

After that the icing: used homemade buttercream was added with a 16″ bag and icing tip. It is not that important to get it completely smooth with this technique as I will explain in the next step. Once the icing sets I used a non textured paper towel (actually used the Kleenex brand) and a fondant smoother. Start with the top of the cake by laying the paper towel down and using the smoother to literally iron your cake. Apply pressure but not too much. You repeat that by moving the paper towel around the entire cake. Tip – when doing the sides lay the paper towel to where it touches your base and then wraps up the top edge back onto the cake top. That way you can round off the cake edge. This takes awhile but really is worth it since fondant is tasteless.

The figures were purchased in the toy department as box sets called “The Streets of Mos Eisley” and then he gets to keep them! I anchored everything with some icing on the bottom. The fabric and posts were from a Lego pirate island my son has and the windows and door were from his Batman Lego set. The back entrance that is not pictured is also from his Lego’s and it was a gate looking door way. Everyone raved about it but the best was my five old telling me he couldn’t believe it and it is the coolest cake ever!