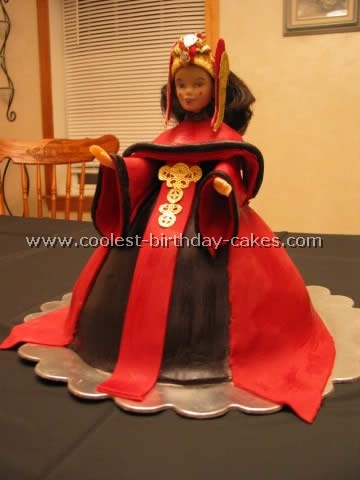 I wanted to create a doll cake, and Queen Amidala was the only Star Wars character that would lend itself to that. I bought the doll top (just a torso with a toothpick bottom) and a week ahead of time, made a headdress for her out of some Christmas material scraps, cardboard, spray mount, and an old costume jewelry earring from the 80’s.

I then put some powder on her face, and using a thin lip brush and red lipstick, made the dots on her cheeks.

The cake was devil’s food, Duncan Hines mix. I used a Wilton doll cake pan, and made my cream cheese icing and added chocolate ice cream topping to it to make it “chocolate”. I bought a box of fondant, which I colored red and black to make the bodice and skirt. I referred to a picture for the design, which I got from the Phantom Menace video box.

I cut up small pieces of a gold foil doily for the detail work on the gown, and everything was stuck on with icing which I carefully applied with a toothpick.

This Star Wars birthday cake came out way better than the R2D2 I attempted, and no one could believe it was a cake!