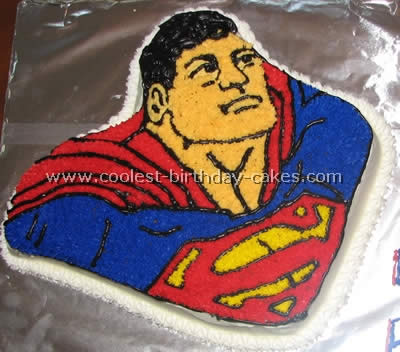 This Superman cake was done for my niece’s fifth birthday (she loves Superman!). I used a Wilton shaped pan and Wilton Superman food coloring set. I used this same pan for my son’s birthday a couple of years ago and I had a really hard time with the indentations that form the features the center emblem etc. After the cake was baked the indentations for the features were almost impossible to find so this time I tried out an idea I had.

I took a food-safe pen and outlined the features in the pan before I added the cake batter. This must be done in a dry pan and a spray cake-release used after the markings are done. When the cake comes out of the pan the markings clearly show the features. This saved me a lot of time when decorating! 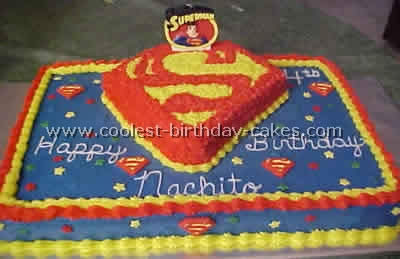 I used a 13x19x3″ sheet cake pan I used three cake mixes for that size pan and letting it bake at 340 degrees for one hour and 25 minutes. I decorated it as you can see with colored buttercream frosting. I also added some decorative primary colored candy stars and Superman emblems to add interest.

For the Superman emblem I used one cake mix and baked it in a 12X2″ round pan. After it cooled completely I put it in the freezer for a couple of hours to make it easier to cut out the Triangular shaped emblem decorating it with colored buttercream icing as well. I then topped it off with a Superman Candle. 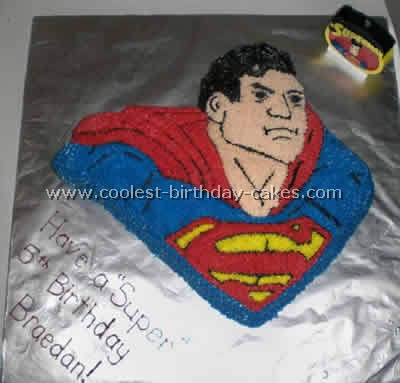 I used the Wilton Superman pan and followed the directions that come with it exactly. I purchased pre-made white buttercream icing and black icing in a tube that tips will attach to since black is so hard to tint correctly without giving it a bad taste. I hand tinted the blue, red, yellow and skin tone from the box of four Wiltons icing colures made especially for Superman cakes.

I found all of these products at Michael’s crafts after I looked them up at wilton.com. I used a chocolate cake mix to box directions and let cool on a cooling rack during the day. I decorated it that night and the party was the next day.

It was a hit and at least 10 people asked if I made cakes to order (I don’t as of yet). It was quite easy although defining the features was pretty time consuming in order to get it right. Enjoy! 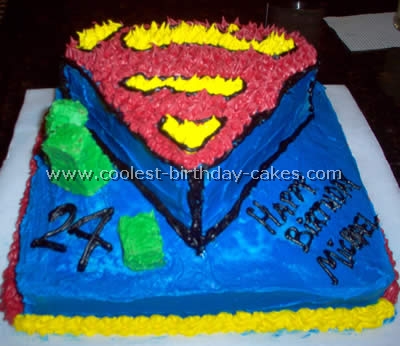 My friend Michael loves Superman so naturally for his birthday I had to make him a Superman cake. I first started by finding the logo online and from there I hand drew it onto a piece of paper. Being the perfectionist that I am a ruler and eraser were my best friends. I wanted everything to be proportionate.

When it came to cake time I made two 8″ square cakes and with some leftover batter made some cupcakes. Like most of my cakes I wanted the logo to pop out (I love the 3D effect of cakes) so I took one of the layers, leveled it off and gave it a royal blue covering. Next I cut the shape out of the second layer, placed it on top and gave that too a blue coating. With a toothpick I went in and traced the “S” design and outlined it with black icing. Then with red and yellow I filled in the symbol.

To add more graphics I used the cupcakes and cut out “crystal” shapes and frosted them green for Kryptonite and with toothpicks inserted them in the Superman cake. With leftover yellow and red frosting I piped a star boarder alternating the colors around the sides of the base layer. When he saw the cake he was shocked by it more so when he found out that I had done it.

Cake by Claudia B., Atlanta, GA 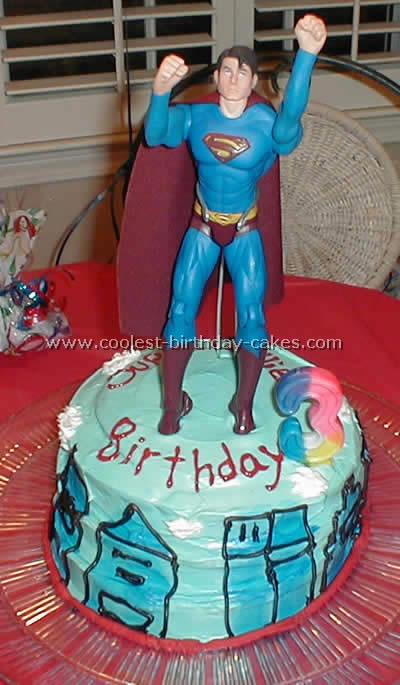 I actually saw this Superman cake on this site and thought it was great. I stacked two cakes together (the top one smaller than the other). The frosting was white and I added blue coloring (coated the whole cake) and for the clouds it was just the plain white frosting. 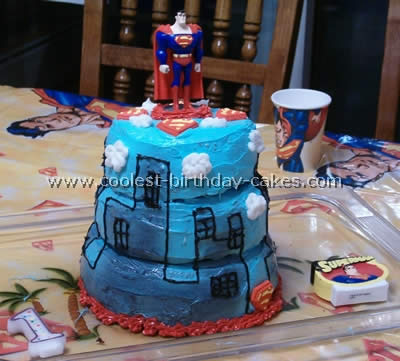 I actually got this idea of Superman from another mom on a creative cake website like this one. The cake was PERFECT for my little boy who loves Superman (and so does his dad!)

I took the easy way out to save time and bought two boxed cake mixes (devil’s food) and put them in three different size glass dishes. I then put blue food coloring into white frosting (the “whipped” kind for easier spreading and put it in the microwave for a bit) and then bought the Wilton frostings in red black and white. The nice thing about that was you can buy four different decorating tips for the Wilton tubes for like $2.00.

I used black food mist spray for the buildings after I outlined them and the Superman on top was my husband’s when he was younger. It was a really fun cake to make. Now I just have to figure out how to top it next year! Good luck it’s really pretty easy! 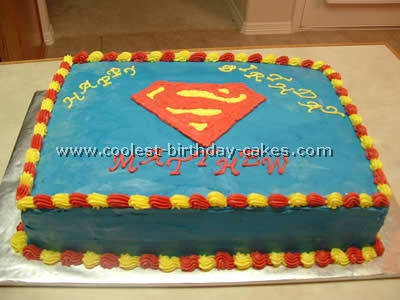 I started by using an 11×15 cake pan for this superman cake. I made one chocolate cake and one white cake. I used buttercream as a filling and stacked the cakes. I iced the cake with a blue icing. I then drew on the superman emblem. 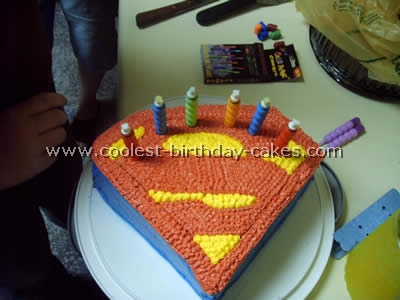 I made this cake for my nephew’s 6th birthday party. He wanted a Superman cake but I wanted to try something a little different so I made a 2 layer 12-inch round cake and I cut the cake to be the shape of the Superman emblem.

I used a piece of wrapping paper as a guide and used the Wilton star tip to color in the top of the cake and I frosted the sides of the cake in Superman blue.

My nephew thought the cake was so cool and everyone wanted to know how I did it! 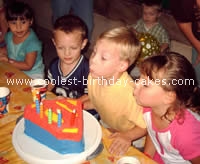 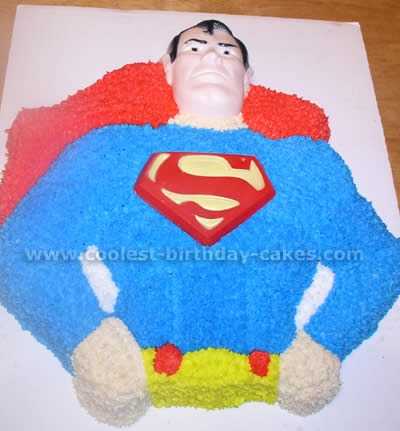 I found this cake pan at an auction that was circa 1976. It had a Superman and Batman plastic face and logo. My 5-year-old loves Superman, so we tried him first.

I just used plain old Betty Crocker cake mix and homemade icing. Sometimes I hate for anyone to eat my cakes because so much blood, sweat and tears go into each one! 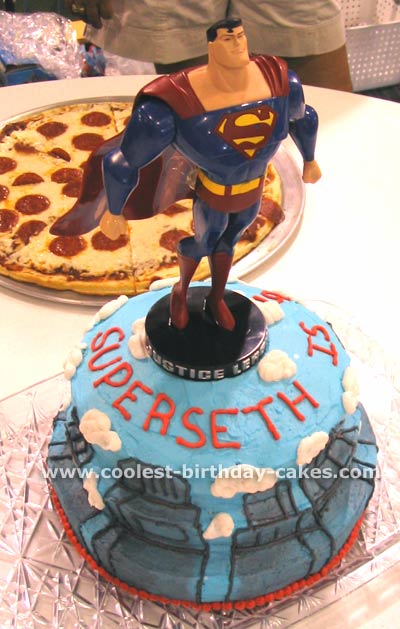 For my son’s 5th birthday, I wanted an action figures cake but couldn’t find one in which I could make without ‘drawing’ my attempt at a hero on top. His cake ended up being the hit of the party!

For the cake we used 3 different sizes of round cake pans and stacked them. I used a toothpick to draw out the buildings with different dimensions and windows.

Next I used regular Royal icing to trace over the guidelines in gray and finished by spraying lightly with Wilton ‘s Color Mist food spray. 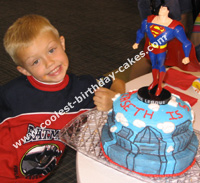 I then piped in some clouds and writing, set the doll on top and KA-POW!! We were done! (I had meant for Superman to be ‘flying’ out of the top but we forgot to raise his arms. Oh well, every mom can’t be a Supermom!)