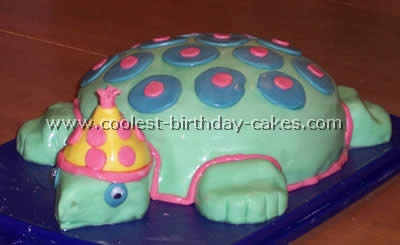 After making a pirate ship for my grandson’s eighth birthday, my granddaughter asked me to make her a turtle cake for her 13th birthday. Having a little success with the pirate ship I decided to take on the challenge. Again I searched the internet for other turtle cakes and then put together my idea for this turtle cake. The cake and all the trim for it was made of a marshmallow fondant from a recipe I found on the internet.

The fondant was very messy but quite easy to make. After making it I used food coloring to get the different colors used in the cake. The turtle body was made of two round cakes. One cake pan was overfilled so it would bake up high with a rounded shape. The two were stacked with the rounded cake on top which gave me the general turtle shell shape. I used a knife to carve just a tiny bit to help round out the turtle shell shape. The head and feet were all made of cupcakes, again carved into the general shapes I wanted. After putting all the parts together to make the cake it was iced with a buttercream icing and then draped with the fondant icing. The fondant was smoothed and shaped to the turtle cake.

To hide the lines where the head, feet and tail joined the body I made a thin rope of fondant icing and outlined the turtle’s shell. To give the shell more texture and color fondant icing circles were cut out with biscuit cutters and were applied to the shell. The hat was also made from fondant icing. The turtle’s eyes were plastic eyes that were found in a local decorating store.

I got the idea to make this cake from a cookbook page on how to make several different shaped unique cakes using a glass bowl and a few cupcakes. This cake is incredibly easy to make. It uses only one cake recipe (box mix or homemade) and one batch or frosting. You just have to make the turtle shell tiles a day or two in advance so that the frosting dries.

A day or two in advance prepare the turtle’s back tiles. Print and cut at least two sets of the turtle tile patterns. Tape or glue the cut shapes onto a board. Cover the board tightly with plastic wrap using tape. Prepare some frosting (any store-bought kind for frosting cakes will work). Color the frosting brown or use chocolate frosting. Using either a small hole in the corner of an icing bag or a small frosting tip used for writing words trace hexagons in a circular pattern starting form the outside and ending in the center. Make sure to make several more hexagons than you actually need as a few will break when you handle them. Make some additional small free-hand triangles as gap-filers. TIP: No piece should be larger than two inches across or it will be extremely difficult (if not impossible) to remove from the plastic without breaking. Put the hexagons away in a non-disturbed place for a day or two–until they are dry. To test dryness gently push on the flat edge of one of the smaller tiles. It should loosen from the plastic wrap without breaking.

A few days later prepare the cake batter using a cake mix or your own recipe. Pour the batter into a cupcake tin to make three or four cupcakes. Pour the rest of the batter into a greased and floured glass Corel or other heat resistant bowl. Bake until done. TIP: cupcakes will cook faster than the cake so make sure to set two different timers to ensure the cupcakes are not burned. Let the cake and cupcakes cool.

Put cooled cake downside down on the surface where you wish the cake to be served. This is the turtle’s shell. Trim one cupcake for the head by curing the sides off. Position the head next to the cake where you think it should go. Cut another cupcake for the feet by slicing the cupcake on its side in half making two circles. Cut the circles in half making half-circles for the four feet and position the feet on the turtle. Use the other cupcake to make a small piece for the pointy tail.

Frost the cake with green frosting. Make sure to be careful and fill in any gaps around the head, feet and tail. Gently remove the turtle shell tiles and place them on the turtle back leaving at least half an inch between each piece.

Thanks for all the great turtle cakes on this site!

I decided to be different on my daughter’s birthday. Instead of a cake she asked for a birthday cookie. I made a double batch of Chocolate chip cookie mix and spread it out on a pizza pan. I used a turtle template for the turtle. She adores turtles thus turtle cakes!