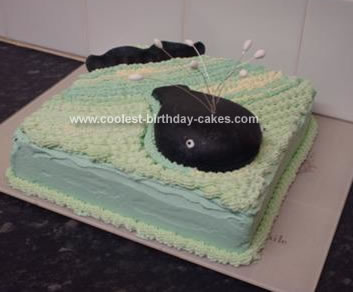 My step-daughter loves whales and asked me to make a cake with a whale on it for her birthday. I found a design for a whale cake on this website that I loved and decided to copy it. It turned out so well that I thought I should submit my picture.

The first thing I did was to make the body and tail of the whale. I coloured 500g of fondant icing with blue paste colour and and then added some black in to make it darker. I then took a small amount of it and shaped the tail copying the design from this website. I laid it on the up-turned cake tin to check it was the right size.

I then used the rest of the icing to shape the body. I shaped it into a ball and then flattened the bottom of it and pulled it onto a sort of oval and just worked away till it looked right. Again I laid it on the up-turned cake tin to check it was the right size. I left it for about 4 days to dry and harden. I then used a thick brush and stippled on some black paste colour.

This was so effective that I would advise anyone attempting this cake to just use white icing and then stipple on blue, green and black paste colour till you get the right effect.

I used my preferred recipe for Madeira cake to make a 10inch square cake. I filled it with jam and buttercream icing. I then coloured half the remaining icing with blue and green paste colour. I put a thin layer of the turquoise icing on top of the cake and a thicker layer around the sides. I then set the whale’s body and tail in position. The tail is supported by 3 cocktail sticks pushed in behind and at the same angle so they don’t poke the tail at all.

After that I filled a piping bag with half turquoise and half white icing and piped the top of the cake to resemble waves. I had enough left to pipe a wave around the bottom edge of the cake.

To mimic the blow hole I used silver floristry wire with tiny blobs of white fondant icing on the end. These were pushed into the whale’s head. If the wire is short enough they will not wobble around. To finish off I piped eyes and a big smile using tubes of writing icing.

This cake is not as tricky as it looks and is very effective. I would encourage anyone to give it a go.