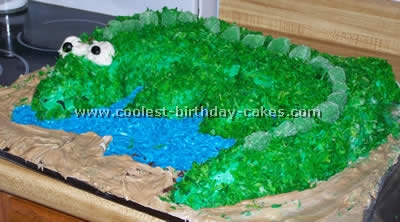 My husband and I made this for our four year old daughter for her birthday. We got lots of ideas from other crocodile cakes on this site!

What we did was make two 9 x 12 cakes, and then we cut out shapes that reminded us of an alligator. There was a lot of piecing to put this cake together. To make the feet we took a cup and cut out two circles and then split them into half.

Cake by Amanda P., Brooklin, ON

This crocodile cake was created for my son’s second birthday. He loves to pretend an alligator is chasing us! The cake was made using a bundt pan for the body (sliced in half and arranged so it looked slithery) and a square pan which I then cut into triangles and placed on top of each other to create the head. I froze the alligator cakes so they were easier to “sculpt” into detail.

I covered the entire thing in green buttercream. The scales and feet were created using mint leaf jelly candies that I got at the bulk store. For the eyes I used marshmallows trimmed down and Wilton black gel for pupils. The cake was loved by all – though I have to tell you we did have a hard time cutting into his head once his body was all gone…something about cutting into a head just doesn’t seem right.