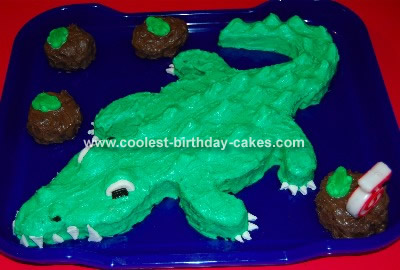 I made this crocodile birthday cake for my son who requested (when asked) a crocodile cake for his third birthday.

I prepared some butter cream icing, which I coloured in green. I first covered the whole crocodile with the icing. Then, I cut some marshmallows to make nostrils, covered them in cream, cut some more to make the eyes and covered them partly. I used even more the cut the spikes on the back of the crocodile and covered them all with cream. I tried to give the cream a rough effect to reflect the tough crocodile skin.

To finalise the crocodile, I used some licorice for the nostrils and the eyes and some more cut marshmallows for the claws.

Some of the left over cake bits I cut in roundish shapes and covered in chocolate flavoured cream to make them look like rocks and put them around the crocodile. I put frog candies on them. Finally, I used some green jelly to mimic swampy water around the crocodile and the rocks.