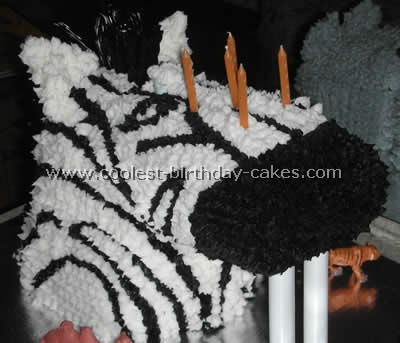 I took some of the ideas from another animal cake and added some as well. I wanted the zebra to be standing up so I used wooden rods and put them through the center to help hold it in place as well as plastic under the chin to keep it from falling.

I used white and black frosting. I put the black on first and then the white around the strips. I used licorice for the mane as well (I loved that idea). As I placed the cakes on top of each other I cut them to shape a head etc. I froze the cakes a head of time for easier cutting.

Cake by Stephanie B., Decatur, AL 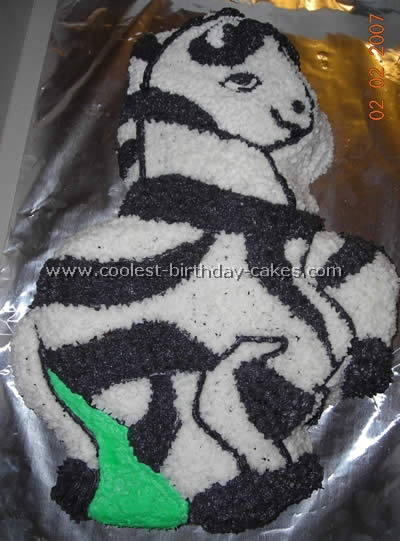 My son wanted Madagascar for his second birthday and we could find no pans for this. I baked him an animal cake with the Wiltons lion pan but he wanted a zebra too. So I dug in my old pans and found the My Little Pony pan which is an antique and just randomly placed stripes in black. Of course I did the black first then went back and filled in the white. The true test was the morning of his party when he walked into the kitchen and I showed him the cakes. When he looked at them and shrieked “Wow! Bebra and Lion!” I knew that I had done an okay job! 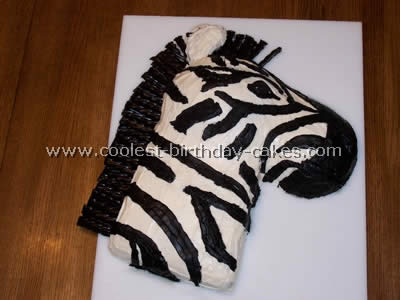 My youngest daughter wanted a Zebra cake for her 3rd birthday.