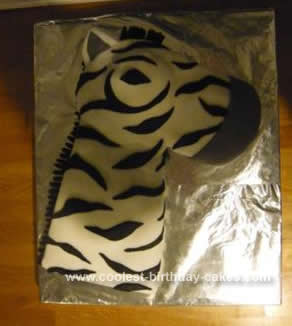 I made this Zebra Birthday Cake for my son’s 2nd birthday – he is animal obsessed and a real Madagascar fan. He wanted a Marty the Zebra cake!! I made the cake to Nigella’s marble cake recipe, which is flavoured with orange too, but just left the stripes rather than merging them, so normal cake mixture spooned in, then chocolate, then normal etc etc!

I made one square one and two in Pyrex bowls – filled one bowl more than the other to get a larger head and a smaller nose section. I then cut an arc from the top of the square and trimmed at an angle down both sides. I took the top off the nose one so it was flat, but left it there for the head and use the bump for the eye.

I used Nutella thinned with fresh squeezed orange juice to attach the white icing and edible glue to attach the black stripes. The mane took ages but was worth it

It went down very well with the kids seeing the zebra and the stripey cake, and with the adults as it tasted great too! 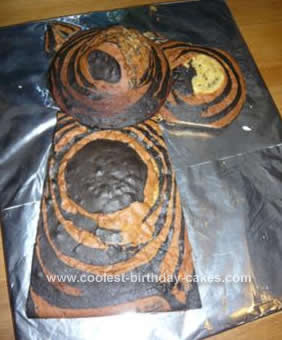