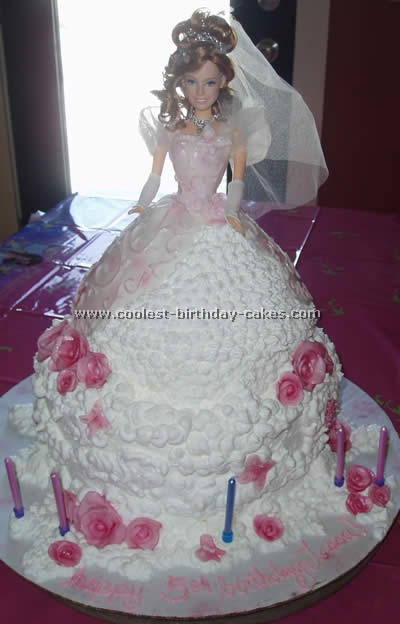 My daughter wanted a Giselle (from Enchanted) Barbie cake for her fifth birthday. I had never made Barbie doll cakes before but thank goodness for this website and all the great ideas! I used a Wiltons wonder mold for the skirt along with one 8″ round for height, it seemed too short otherwise. I also used three 10″ rounds for the lower half of the cake. The cakes were just boxed lemon cake mixes, nothing fancy and I used an icing called better-cream (its non dairy whipped icing, worked like a dream!) for the majority of the frosting on the cake.

I used a piping bag for the clouds and the ruffles of the skirt and the vines on the skirt and top. I also used fondant on the back portion of the skirt, the top of the dress and for the roses and butterflies. I then used pink and white luster dust on the roses, the fondant portion of the skirt and dress and the butterflies. The Giselle doll is actually the head from my daughter’s Barbie and the body or should I say half-body is of the doll that came with the Wiltons wonder mold. I made the puffy sleeves from a bit of tulle material. It turned out better than I had imagined it would! My daughter was very pleased! 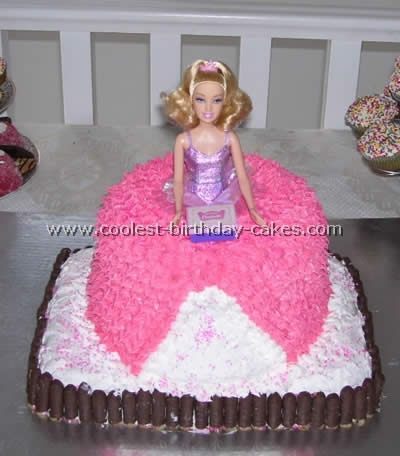 This is the first time I ever tried to make Barbie doll cakes. My daughter wanted a Barbie cake and I figured I’d make one myself. I used a 13×9 for the base, two 9 inch round cake pans and a deep dome cake pan for her dress. I made it large so I wouldn’t have to destroy the Barbie. I also had her holding a little gift box which contained a pair of Barbie shoes. My daughter loved it! 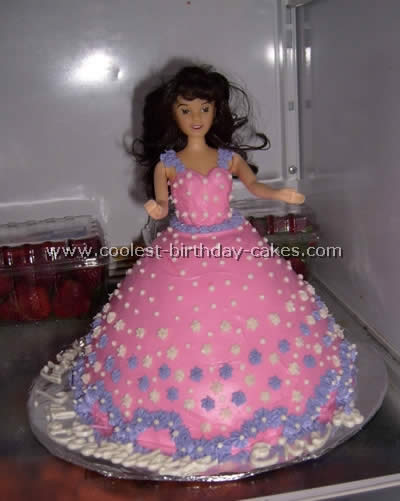 I had the Barbie cake pan. It took almost two cake mixes to fill it almost to the top. I bought the Barbie torso at Michaels craft store. I iced the whole cake in pink then stuck the Barbie torso in the cake. I then iced her chest with a # 16 tip. I made the straps on her shoulders. I had to pun up her hair till the icing dried. Then I let it down.

I used regular store icing and colored it with Wilton food dye. I used # 21 for the bigger flowers around the bottom of her dress and # 16 for the rest on her dress. Then I used tip # 3 for the white dots all over. This was my first try at Barbie doll cakes and my daughter loved it! 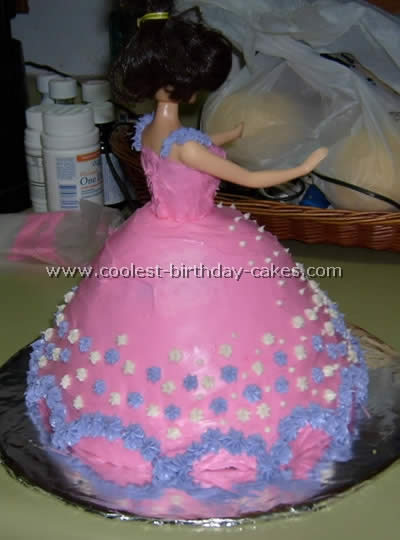