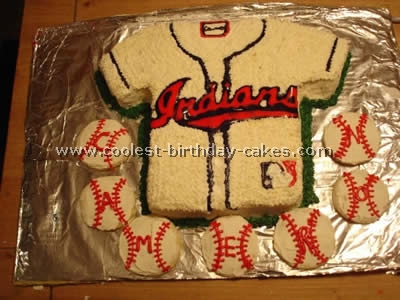 For these baseball cakes I used a 9×13 cake for the shirt and used a cake baked in a loaf pan and cut in half for the sleeves. For the Indian’s logo I used corn syrup/powdered sugar mix and added the colors.

I printed out the logo and covered it with wax paper. I used a piping bag to trace the logo with the mix…put it in the freezer for half an hour. I covered the cake with butter cream and put the details on with icing. I took the logo from the freezer and flipped it on to the cake. 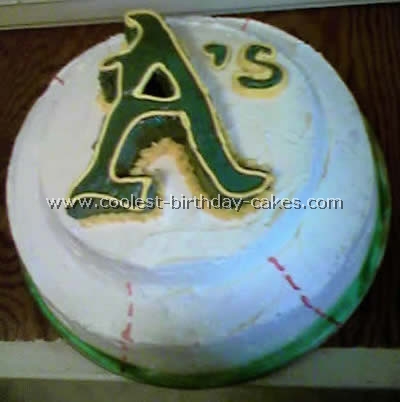 This cake may look harder than it really is. I used a 12-inch cake pan for the baseball. I frosted it white and then added red seams on it with frosting. For the A’s symbol I drew the “A” in parchment paper and used it as a template to cut the “A” out of a 9-inch cake. 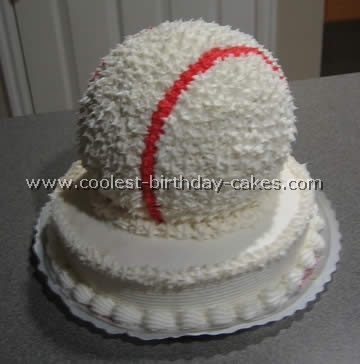 I made two baseball cakes for my son’s first birthday party. I made one for him to destroy and one for everyone to eat as well. It is the Wilton baseball kit. I followed instructions as on the Sports ball Wilton box, except I bought and used tubs of white icing. I made a practice cake first, and the icing I made melted right off the sides. 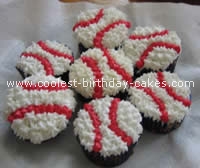 Tips – change out your icing often to prevent it from warming and melting. Freeze the ball after cooking it to prevent the cake from crumbling as you frost. Frost the bottom first to prevent your hands from touching areas already frosted. I made cupcakes to match. These baseball cakes made a little boy very happy :)! 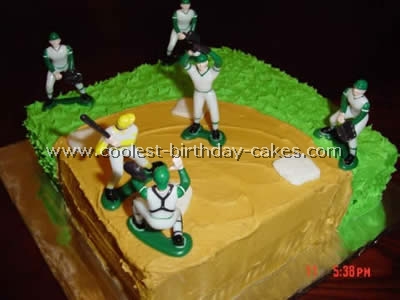 After playing in an adult softball league we had an end of the season party to celebrate. The cake was made for everyone to eat; however it became a topic of conversation as well. I used the Wilton square 8.5 * 8.5 cake pan (1 cake mix). The green frosting was given the effect of ‘grass’ by frosting the cake with more frosting than you would normally use.

Once the cake is covered take the your knife or back of a spoon and tap and pull it up all over the green area. It creates ‘peaks’ like when you make a meringue pan. The baseball cakes players and sugar confections on the side were picked up at a local cake specialty store (this is not something that is sold at Michael’s or Hobby Lobby). These types of baseball cakes are actually very easy to make and everyone will love it. 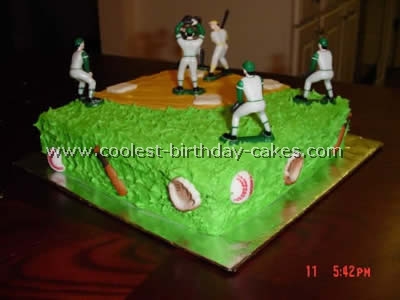 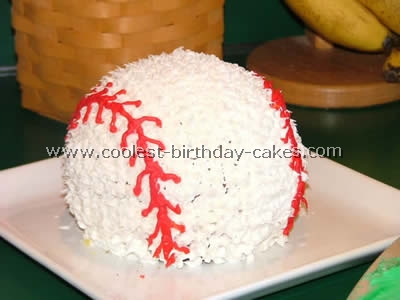 The first cake out of all the baseball cakes is of Fenway Park in Boston. My son is a Red Sox fan and so I thought it would be fun to do the “Green Monster”. I made a “sheet” cake on the Pampered Chef Large Bar Pan Stone (10 x 15 1/2) I also made a 10 in. round cake (only one layer).

I cut the round cake in half for the big wall and secured it in place with toothpicks. I then cut the other half to make the stadium seats. I used colored sprinkles to make the “people” sitting in the stands. The second of the baseball cakes is simply the Wilton’s Ball cake pan. I followed the directions on the box to pipe on the icing. The kids all LOVED the cakes for his sports themed party! 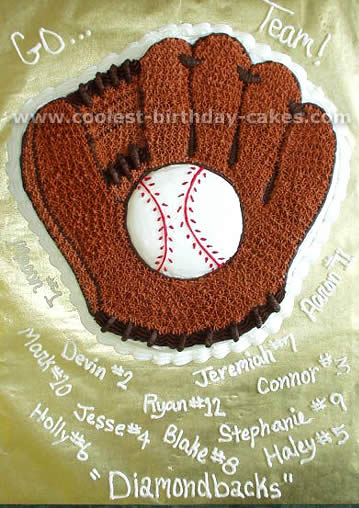 I made these baseball cakes for my boys T-ball team. The glove cake was made from the Wilton cake pan and frosted to look like a glove with a ball. The ball cake was a 2-layer 12in white cake on bottom with strawberry filling and chocolate cake sports ball on top. 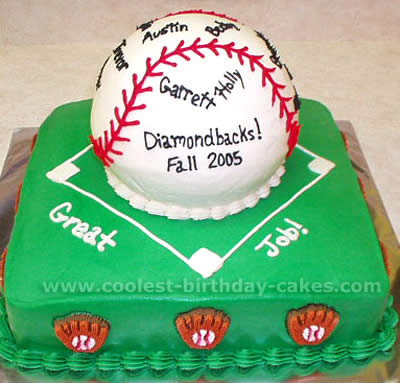 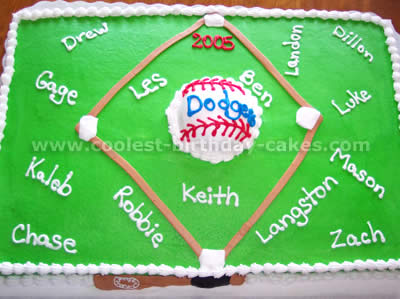 This was a team cake for little league. I used a 12×18 sheet cake and used a little bit of the batter for a mini ball cake to put on top. I just iced it all smooth and used the basket weave tip with the smooth side for the bases and running path. I also drew a bat on the side and filled it in with a star tip. I listed the kids and the coach’s names. It was a big HIT! 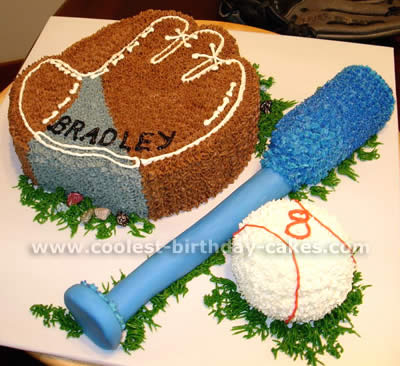 Bake a 9″ round cake, 2 mini sports ball cakes and one in a food can. Cut the mitten shape roughly and outline details. The cake from food can is shaped to form the upper part of the bat; the rest of the bat is fondant. I also laminated a picture of a baseball player to add to the theme. 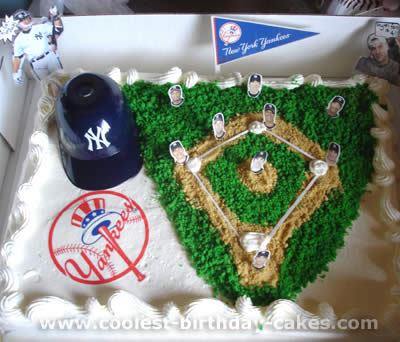 This cake was for my 4 year-old son. I started with an undecorated Costco cake. I used dyed green sugar cookies (crushed) for the in and outfields and crushed graham crackers for the baselines and pitchers’ mound.

I downloaded pix of the starting Yankee line up and cut out and taped onto toothpicks. I found my son’s 2 favorite players and added those with some sayings. This was a well-received cake, even from our Red Sox fans friends. 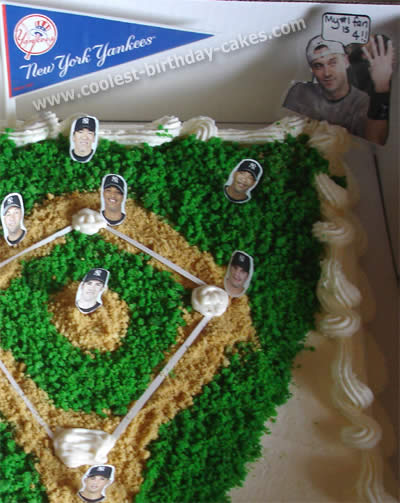 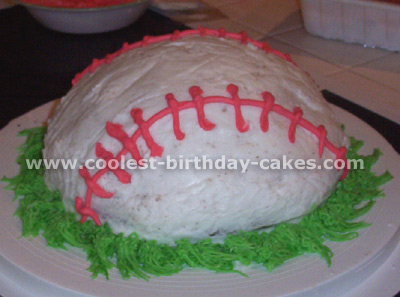 I made this cake using one cake mix and the Wilton soccer ball pan. I just smoothed out the white icing instead of making the soccer print. The grass and red seams are made with tips. Baseball cakes are quite easy! 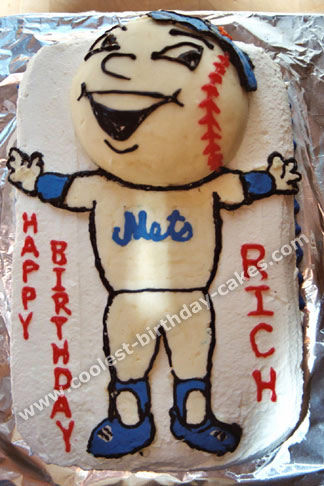 This was my first attempt at frozen butter cream transfer. There was a chocolate bottom, raspberry cream filling, and vanilla top whipped cream covering for cake. Baseball cakes are fun to make! 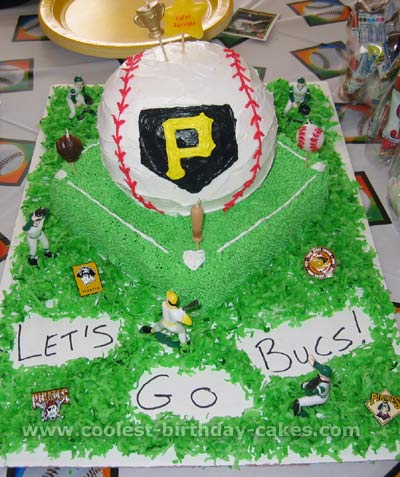 I made this cake for my son’s 5th birthday party. We live outside of Pittsburgh, and are big Pirates fans.

The base of the cake is a 9×9 pan. I frosted it with the small star tip to look like grass, and then painted on the bases and the lines. I made the baseball using the round ball cake pan, and included the Pirate’s logo.

I placed the plastic players around the cake, and colored coconut green for grass. I used baseball candles and placed them around the cake. I added some Pirates pins we had for added decoration. “Let’s Go Bucs!” is what we say during the games! 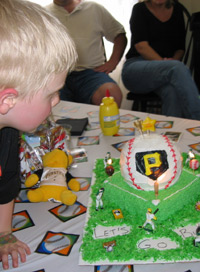