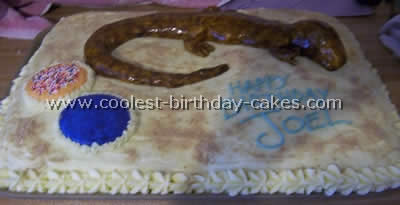 My cousin wanted a lizard as a pet for his birthday so I decided to make him a lizard cake instead. I molded the actual lizard by hand out of candy (one package cream cheese and 1kg of icing sugar, flavoring and color). Then I painted it with some thinned out paste icing colors. I stuck two amber colored rhinestones in the head for eyes. Next I took two rectangle cakes, one white and one chocolate, iced them together side by side and covered each with a pale yellow icing, sprinkled it with graham cracker crumbs to look like “sand”. Carefully placed the lizard on top (his tail broke but I squished him together on the cake, no one noticed).

I took two digestive cookies, covered them with a thin layer of candy then painted one blue for water and the other I stuck rainbow round sprinkles onto for lizard “food”. I took a box and cut out the sides of it and then covered it with tin foil to make like a cage or an aquarium for the cake. That was Joel’s birthday lizard. It was a great hit at the party, we took many birthday cake photos and the kids devoured it. 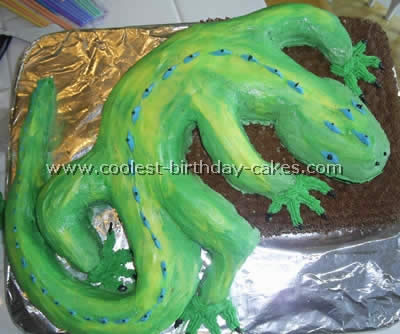 I got the idea online from someone who made a similar cake and shared their birthday cake photos, so I copied their idea!

The lizard was cut from a round cake and placed on top of a square cake. My husband was able to make the frosting so smooth by using a small “new” wet paint brush. He dipped it in a little water and smoothed out the frosting! 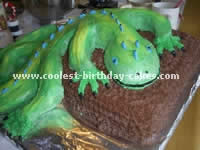 I made this Gecko Lizard cake for my friend’s son Tristan. She had looked everywhere to try and get a cake with a gecko lizard on it, but to no avail. As a last attempt, she asked me if I could make one for her. I searched the internet to see if there were any birthday cake photos I could use as a guideline and I was unable to find any so I printed off pictures of geckos and used those as my guide.

My horseshoe shaped pan I used for the body of the gecko and my daughter suggested using a cupcake heart for the head which turned out to be the perfect shape. I ended up only using 1/2 of the horseshoe, cutting that in half and putting it back together in the shape of a 1/2 “U”.

I did have to carve down the tail to make it gradually become smaller. Part of the tail is made out of cake and the smaller section is made from rolled fondant.

The legs and feet I shaped from rolled fondant also.

As you can see by the birthday cake photos, I have the gecko sitting on a 10X10 square cake because I did not think the gecko alone would be enough to feed 12 9-year old boys.

Next, I decorated the gecko using a photograph of a tropical gecko. I piped on the colors and used a paint brush dipped in hot water to help me with the hard to reach areas and to smooth out the buttercream.

I decorated the gecko first and then the square cake. Then I added a wafer-paper butterfly and the lettering and my cake was finished.

I was delighted by everyone’s reaction to the cake and now someone else looking for lizard birthday cake photos will be able to save time and find them here. 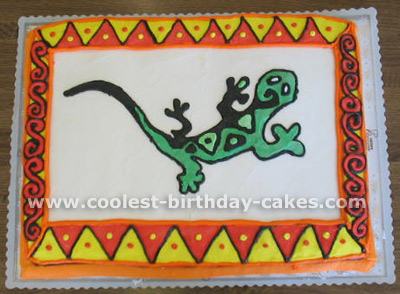 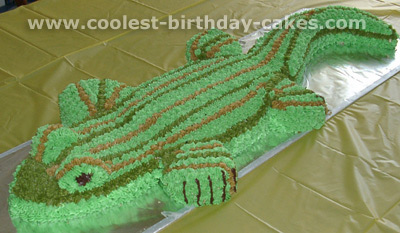 Then I froze the cakes because it makes cutting easier. Next we drew an actual size template of a lizard on sheets of paper taped together. We cut out the template, laid it on the frozen cakes, and cut out the lizard shape.

Next, I pieced the lizard together; trimming the pieces until I got the look I wanted. The eyes are made by cutting small semi circles of cake and placing them on the head.

I then refroze the cake pieces so that I could easily frost the cut sides of the cake (to prevent excessive crumbs in the frosting).

The lizard legs, eyes, head, and tail are attached to the body using frosting as “glue”. Using a piping bag and a star tip, I piped stars in striped patterns to mimic Speedy the lizard. Don’t be afraid of piping and butter cream frosting. It’s easy and hard to mess up. You can make the stars bigger to cover more area and get done quicker by simply squeezing out more frosting.

This cake was a huge hit. The kids couldn’t decide which part of the lizard to eat first. It’s always best to take some birthday cake photos once you’ve put so much effort in making a cake!!