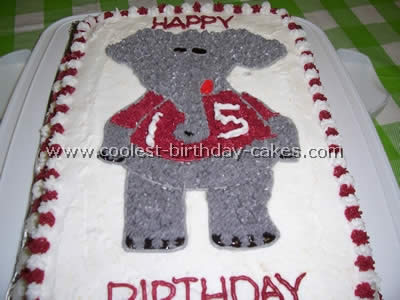 I made this cake for my nephew’s 15th birthday. He is a big Alabama Crimson Tide football fan. I searched this site for football cakes but decided to make his a cake with this emblem.

I took a sheet and decorated with white and crimson icing. Then I found an elephant coloring sheet and traced it with piping gel. I transferred the picture on to the cake., I used grey icing for the body. I used black for the toes, mouth, nose and eyes. Next, I also drew on a football jersey which is the color of Alabama. 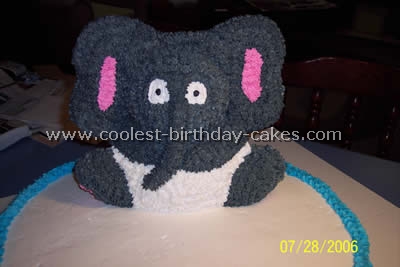 I used a pound cake for this one. I made the ears out of candy melts. To get them to stay on I cut a slit in the sides of the head from the ears down and slid the ears in. Once the cake was iced they stayed on well.

Just don’t forget to change the nose to a trunk and your elephant is complete. Thanks for sharing all the coole birthday cake pictures on this site! 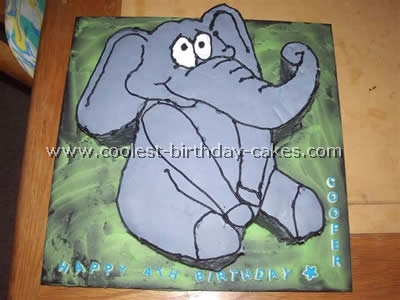 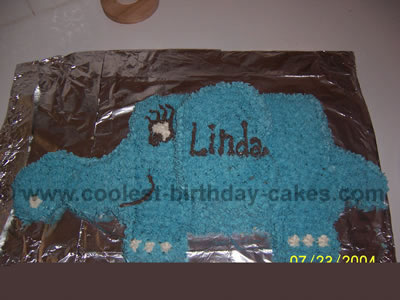 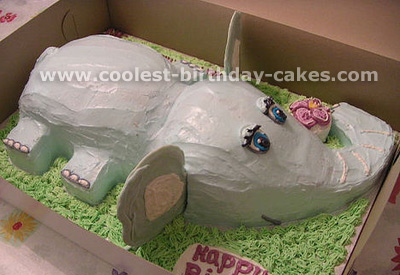 A friend of mine requested an elephant cake holding an orchid flower in its trunk for his girlfriend… so this is what I came up with.

I baked two 9×13 in. cakes and then stacked them on top of each other. Then I cut the whole cake in half and placed them next to each other like a “T” shape. The horizontal became the head and vertical became the body.

Next, I rounded the elephant’s head and body free hand with a serrated knife. Extra pieces are used for the trunk and legs. After the shape was finished, I iced it with a light blue frosting, drew the eyes, and added details. The ears were made of white chocolate dyed with blue food coloring to match the icing. It held up pretty well.

I didn’t put much time into the orchid flower, which was made of a cupcake and drawn on with icing. The last thing was the green icing piped on the cake board. I used a tip with many small holes to give the illusion of grass (as you can tell in the birthday cake pictures). 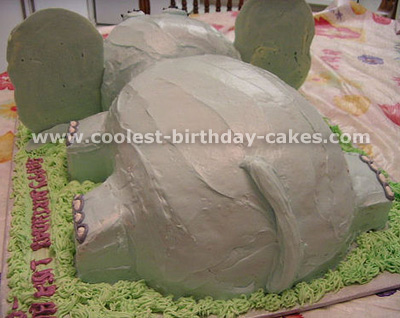 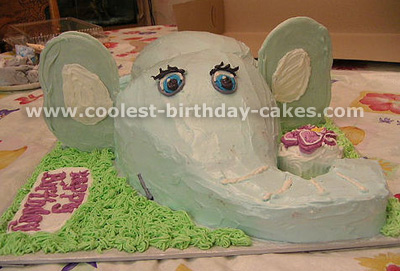