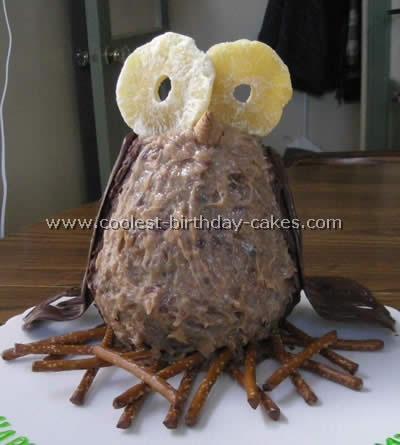 This birthday cake decorating idea and inspiration came from the others I found on this site, thank you everyone for the great ideas. I baked a chocolate cake in two different bowls and put them together to form the egg shape (I’m sure there are lots of ways to do this but I used what I already had in the kitchen). I used a dowel to give it extra support.

I used coconut frosting for the tummy and face. I thought the color and texture worked well. I used chocolate frosting for the rest of the body. Dried Pineapple slices were used for the eyes and the end of an ice cream cone for the beak. To make the wings I melted chocolate chips, piped an oval wing shape onto foil and put a ball of foil under this so that it would have a little more shape. Once the wings were cool I just used some extra frosting to “glue” them into place.

Cake by Hazel A., Scotland 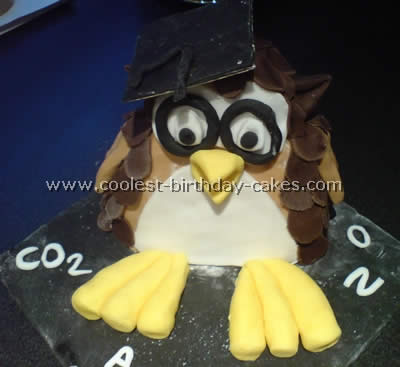 I just prepared a normal round sponge cake, turned it on its side and covered it in Buttercream icing before sculpting the outer layer of icing using Regalice (royal icing). I came up with the birthday cake decorating idea for the cake when I learned my boyfriend’s Mum was a science teacher before she retired. It was her birthday and I thought it would be a good idea.

I saw a flat owl cake that just lay on the board and was drawn on plain white icing but I decided to have a go at a three dimensional Owl. When laying the cake on its side, cut a small section off the bottom edge to make it stand flat and also make sure that the feet/claws are nice and thick to keep the cake upright as its very delicate. 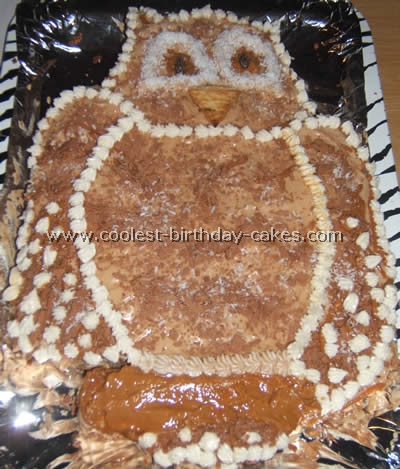 I am a kindergarten teacher and my class name is “The Wise Owls”. If it is a child’s birthday, they always bring cake to school, so I decided to do the same when it was my birthday. I found a nice picture of Owl from Winnie the Pooh and copied the cake from that.

I just used butter icing, coconut around the eyes with a raisin inside, grated chocolate and coconut on the rest of the body for a white and brown effect. The kids loved the cake! 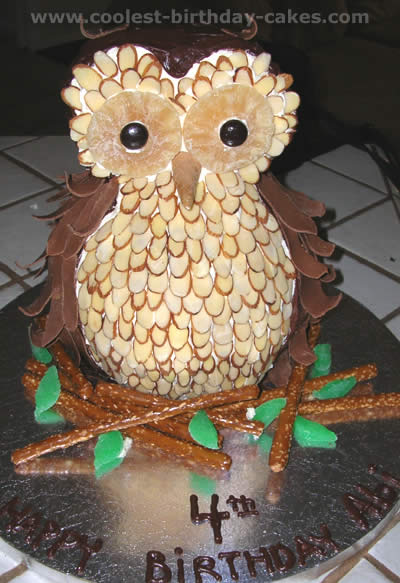 As a tradition passed on from my mother, the birthday girl gets to decide what kind of cake she wants.

For my daughter’s 4th birthday she requested an owl cake. When asked how she came up with that idea she responded, “my heart told me”. I couldn’t argue with that reasoning and set out on the task of making an owl cake.

I started by making two cakes using the Wilton Cake Classic Wonder Mold pan, and one cake in a bread pan. After cooling the cakes I assembled the body of the owl by inverting one dome shaped cake on the cake stand and placing the other on top of it, securing it with dowel rods, to form somewhat of an oval shape. I then cut a kidney bean shape out of the cake from the bread pan for the head. I secured that with dowel rods as well.

I then frosted the owl, buttercream for the face and breast, chocolate for the rest. I used sliced almonds for the breast feathers and face, dried pineapple rings and junior mints for the eyes, a sugar cone piece for the beak and shaved chocolate for the larger feathers. I just used a vegetable peeler to shave strips of chocolate off a chocolate bar. I then created a nest around the owl out of pretzel rods and gumdrop leaves.,