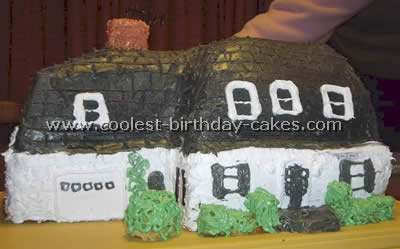 I got the birthday cake decorating ideas to make a house from my mommy. My grandparents had been away for about a month and I wanted to make them a cake so we could have a party when they returned. She told me to make a “home sweet home” cake but I decided to step it up a notch and make it resemble their house as much as possible which then makes this cake only apply to me but maybe if you see something you like it can be applied to other cakes.

In preparation for this cake I first went up and took a boat load of pictures of the whole exterior of the house and then measured their house so that I could make the cake not only look similar but also as proportionally correct as possible for me. To make the cake I baked two rectangle cakes and then cut them down to size and stacked them on top of each other. I then made a third rectangle cake, cut it down to the same size as the other two then slanted it slightly in an attempt to make it look like the actually house. With the leftover pieces of cake I formed the top of the roof which also proved to be difficult because I was just kind of sticking wedges of cake here and there till it finally resembled a roof. 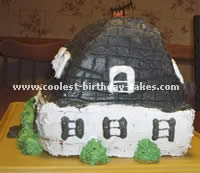 I stuck the layers in the freezer for a while because frozen cut edges are much easier to ice than non-frozen cake. After they were frozen I put Bavarian crème stuff between the layers and began to ice my cake. The stairs and bushes were just leftover cake pieces which I found that it was much easier to just pipe the icing onto the bush instead of trying to smooth it over. The basketball hoop, the antenna and the satellite dish (which you probably can’t see from the picture) are made from melting chocolates that I shaped on wax paper.

For the textured (bricks shingles) I just used a tooth pick and made the outline. All the windows and vines and doors etc. were just piped on. I think that covers all my birthday cake decorating ideas. 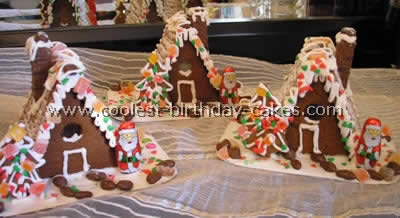 These are my favorite Christmas chocolate biscuit houses I make every year. Even though this is a Christmas cake I used birthday cake decorating ideas from this site. Each is made with two rectangular and two triangle biscuits (plus a couple of pine-shaped ones) which I make myself with rolled out pastry.

Royal icing helps the biscuits stick together and is piped on the roof and all over the yard. A choco-waffer is attached on the roof as a chimney. House Birthday Cake Decorating Ideas

Chocolate candies and jellybeans decorate the house and garden. A chocolate Santa stands near the house and welcomes the child that receives the house as a gift on the Christmas carol day. 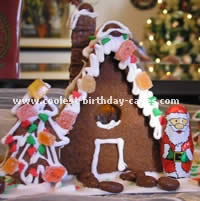 Chocolate candies and jellybeans decorate the house and garden. A chocolate Santa stands near the house and welcomes the child that receives the house as a gift on the Christmas carol day. 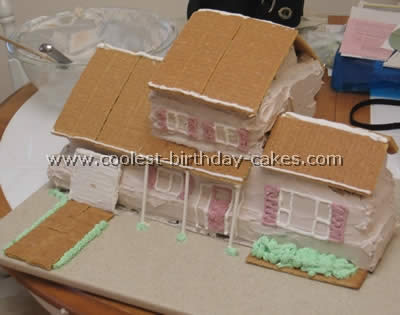 This cake was difficult to make because I was using a limited supply of pans and shapes. I first had to design it and take actual measurements so I could use the paper as a pattern for my birthday cake decorating ideas.

For the roof I cut out a triangle and iced them. I placed graham crackers on top to make it look like shingles. I then sealed them with icing. The rest was just coloring in with icing. 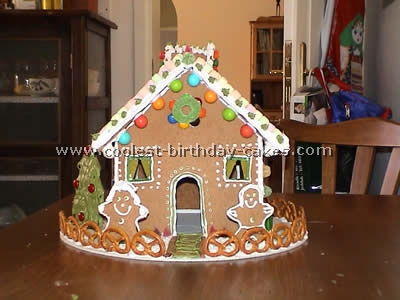 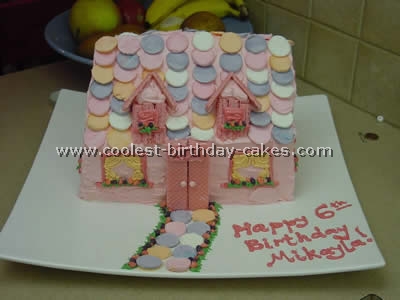 My daughter had a “dolly and me tea party” for her 6th birthday. She wanted this dollhouse cake that we had seen in a party magazine a few years ago so I got birthday cake decorating ideas from this magazine.

I baked a 9×13 cake, sliced in it half and stacked them on top of each other. I baked a second one and cut that one into triangular sections that I placed on their sides on the top of the cake to form the roof.

We chose this color combo because the party colors were fuchsia and orange. I used nerds for the flower boxes.

I live in Canada where necco candies are not sold (I found that out only after traipsing my 3 small children around town searching for them!!) So I made them out of royal icing rolled it out and traced around a quarter to get circles in just the right size and color.

It was time consuming but I was determined!! I used wafer cookies for the door and the windows and nerds for the flowers.

The kids all loved it, especially the tiles on the roof which of course made it all worth it in the end! 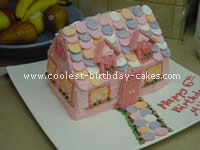 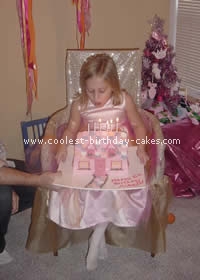 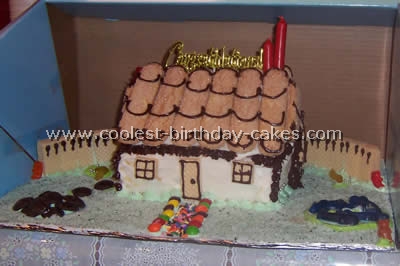 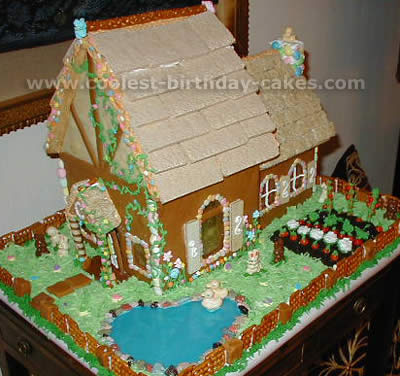 Here are my birthday cake decorating ideas for an Easter bunny cottage my daughters and I made. As my eight-year old notes, “The pond is the only thing that is not edible” (It’s cut from blue plastic, but “rocks” around it are candy).

The vegetables have jelly bean bases. Carrots and radishes are jellybeans cut in half with have piped stems and leaves. Cauliflower and lettuce are jellybean bases with laves and piped with the small leaf tip and white veggie piped with no. 16 star tip.

For “glass” windows chop up hard candy and fill pre-cut windows when you bake the gingerbread pieces (on top of parchment paper or foil). Chimney is Reeses Easter egg pieces cut in half, with royal icing as mortar.

Entire thing held together and decorated with royal icing. Ducks and bunnies are made from candy melts using a plastic mold. 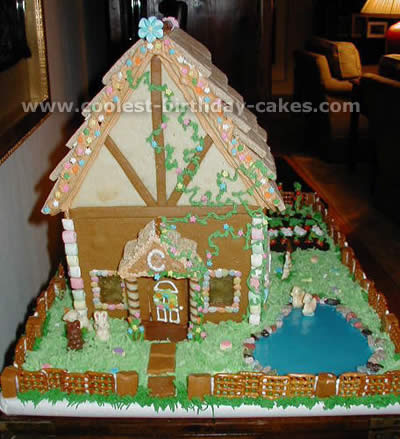 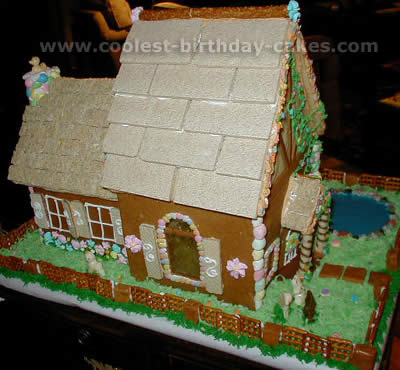 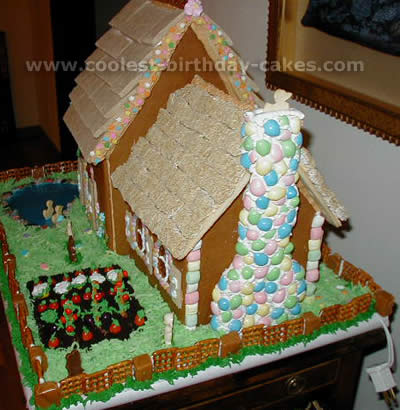 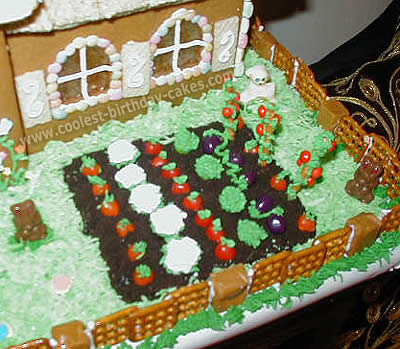 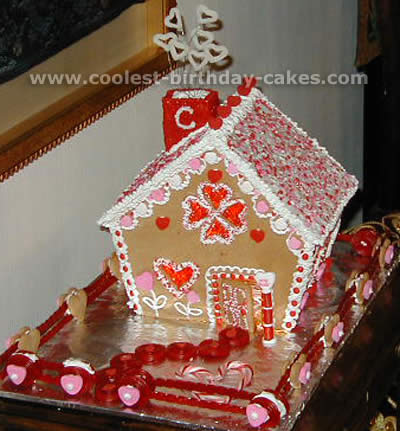 For the gingerbread dough – choose your favorite gingerbread recipe. I checked several on line and chose one that had a light color – to better go with the pink/red/white Valentine theme. You can also download templates from the internet – just use a search engine to look for gingerbread house templates and gingerbread birthday cake decorating ideas.

I do not really recommend this particular design for first-time house “builders” because the slanted sides make it somewhat difficult to assemble. Better to do four straight sides along the lines of a house instead of a cottage.

Roll out your room-temperature dough between two pieces of parchment paper. Using the template you made (or printed from internet) cut edges of roof and wall pieces with a pizza wheel (using a pizza wheel helps preserve the shape of the pieces, and is also easier/safer for kids to use).

Then use heart-shaped cookie cutters of various sizes to cut out the windows, and don’t forget to cut out a door piece (and bake the door as well). I used four small cookie cutters to make the front top window, and then used larger heart shapes for side and back windows.

Slide the parchment with the cut house pieces onto a cookie sheet and place in the freezer for about ten minutes so that they can harden – then transfer them to a foil lined cookie sheet for baking (putting the shapes in the freezer makes them MUCH easier to transfer without distortion).

Bake the pieces according to baking instructions. When you have ten minutes left to bake, pull out the sheets and place crushed hard candies (I used red life savers) in the windows to get the red “stained glass” (if your dough has expanded and your windows have shrunk, just re-cut the half-baked dough with your heart-shaped cutters — as I did — to regain your original heart window shape before adding the crushed candy).

I have read on line that Jolly Rancher candies also work well for the windowpanes. When the cookie sides have baked and candy has melted into panes, remove from oven and let thoroughly cool (candy is HOT) before lifting the pieces off the foil.

The royal icing serves as “glue” to stick the sides together. My daughters and I first decorated all four sides while they were flat on the table – using royal icing piped from a bag with various valentine candies. For the two sides of the roof we diluted the royal icing a bit with water and covered the roof slabs, then liberally sprinkled heart-shaped edible confetti and colored sprinkles (this was my daughter’s idea). The royal icing will dry hard.

When the pieces are set and icing dry, it’s time to assemble the house (you can also add some decorations to the house afterwards, but it’s harder to decorate standing pieces than flat ones). Before you assemble the house, prepare a sturdy board by covering it in foil. If you assemble the cake on something flimsy, it will be difficult to transport to another location without breaking.

Use the royal icing liberally (squeezed from piping bag) to connect the four sides together first. Squeeze icing on the edges – both inside and out. You can use canned goods to prop up the sides. After the four sides are set, attach the roof with royal icing. We assembled the chimney separately and let it dry, then use royal icing to attach it last.

Every bit of this house is edible (and WAS eaten by my youngest daughter’s kindergarten class) except for the wires, which are supporting the heart-shaped smoke rings (these were gummy candies ordered from Oriental Trading Company).

The chimney is stuffed with marshmallows, which support the wires. For the fence we used red licorice twists connected to small gingerbread heart cookies to make the fence. The round red sidewalk slabs are licorice rope rolls. We also cut two candy canes to form a “pond”.

If you want, you can place a strand of lights inside the house, and plug into the wall so that the house lights up (as in second picture).

We had so much fun doing this, our second, house (and the one we did for Christmas), that we’ve decided to do one for every holiday! Have fun with your own original birthday cake decorating ideas! 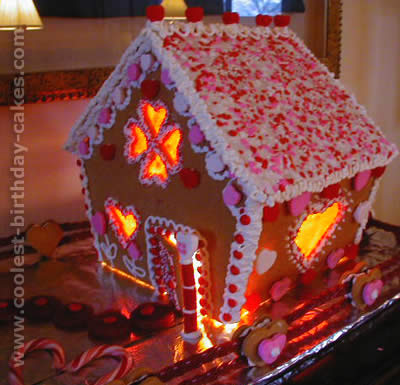 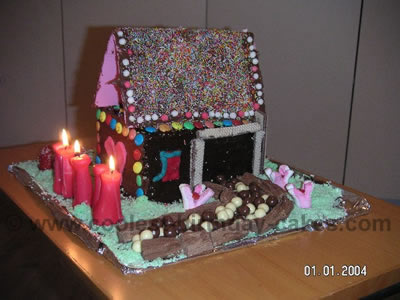 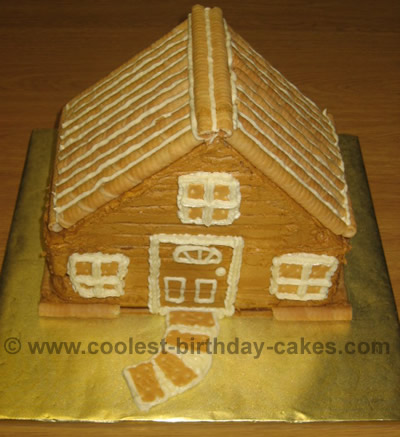 There you have the shape of the house. This is one of those birthday cake decorating ideas that you can use your imagination with and turn into any house you wish to make. I wanted to make a log cabin so I used wafer cookie sticks for the roof and flat cookies for the windows.

I hoe these birthday cake decorating ideas have helped you!