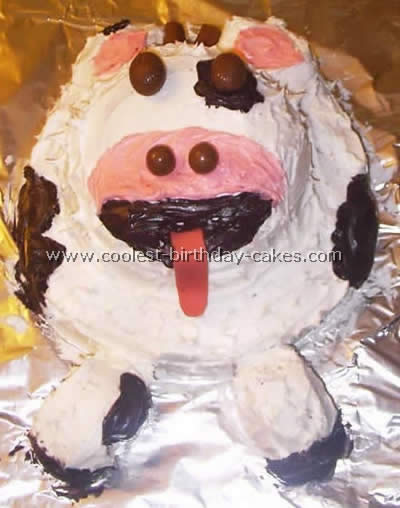 My mom loves cows so I thought this would be a fun cake for adults as well as kids. As you can see from this birthday cake picture it really is a simple cake using a standard 8 in. round pan for the body, a small glass bowl (I used Pyrex) for the face and two cupcakes. Place the bowl cake slightly above center for the face and cut each cupcake in half. For the ears lay each half as if the cupcake were standing up normally and for the legs lay it cut side down and trim any rounded edges to look like legs.

To decorate I just used a canned white frosting- for the pink mouth and ears I took a small portion of frosting and added enough red food coloring to make a soft pink and then I used black frosting in the spray can with the ribbon tip for the spots. To finish I used whoppers for the nostrils, tootsie rolls for the horns and Reese eggs (but if it’s not around Easter whoppers or any other round chocolate candy will work). My favorite part was the tongue. A friend told me to take a stick of big red gum round the end push it gently into the cake and then mold it around the layers to look like the cow is sticking her tongue out! 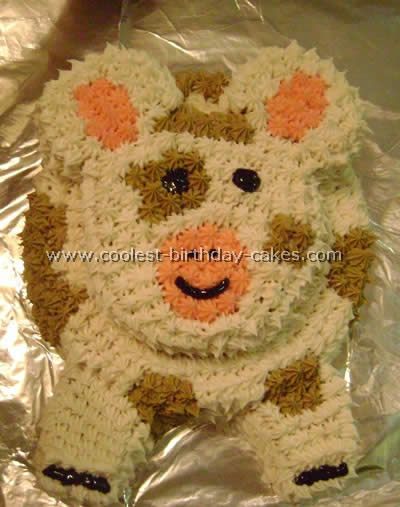 I made this cake for my son’s second birthday party. I looked online and found this wonderful website with cow cakes! I took different ideas from several cakes and ran with it.

I used two-8″ round cakes. I put one on the cake board for the body and the second one I cut out a 4″-5″ circle for the head and shaped the remainder into two legs and two ears. I put a thin layer of plain white icing over all (frost all pieces separately then assemble). I used 4” long dowel rods to hold the ears in place. Place cake in refrigerator at this point until ready for piping.

Then I made brown and pink icing from food coloring (you can usually buy brown food coloring in the craft section of department stores). I piped the pink first in the pattern shown using a star cap. I then piped the brown spots (including around the eye) then added the black embellishments using regular black gel.

After all this is done using the same star piping, cover all areas not yet covered with regular white or vanilla icing. I used boxed cake mix and regular store bought icing. If the icing is too thin you can add confectioners’ sugar to thicken it.

As you can see from this birthday cake picture, our cake was a great success! 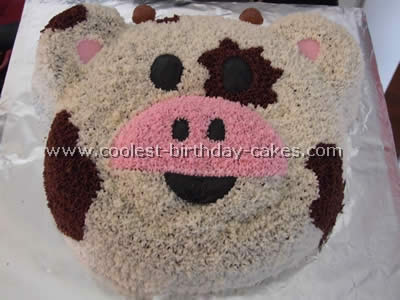 This was made using the “animal crackers” cake pan.

The frosting was butter cream and the horns were root beer dum dums.

It made for a lovely birthday cake picture. 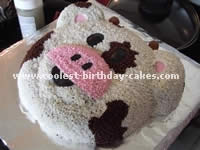 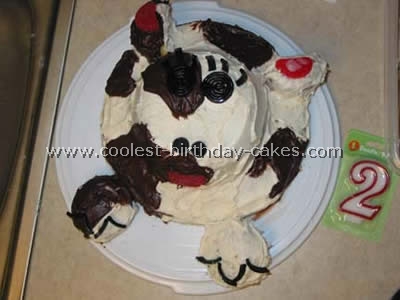 I got this idea off another birthday cake picture website but I can’t remember which one. I used one cake mix and made one 9” round cake, one 6” round cake (I think I used a Pyrex mixing bowl and filled it up an inch or two), and three cupcakes. I cut one cupcake in half (top to bottom) to form the ears and placed the 6” cake on top of the 9” cake. Then I placed the two cupcakes at the base for feet., , I iced it with chocolate and vanilla icing and then used fruit jelly slices for the ears and mouth. The eyes, eyelashes, nose, and toes are made from rolled up licorice circles (Hairbo brand?). I unrolled some of the circle to get the straight pieces and left some circles in tact (bigger or smaller) for the eyes and nostrils. Yummy!

Cake by TJ M., Bloomington, IN 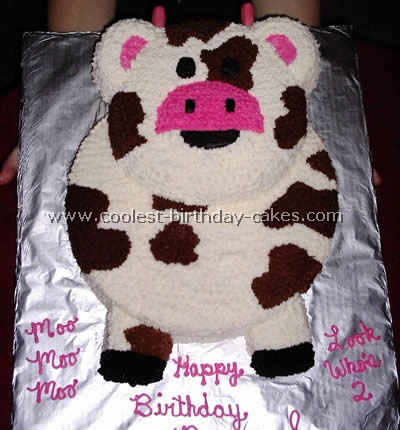 My grandchild loves cows and I saw a birthday cake picture in a book and thought it would be perfect. I used the Wilton Animal Crackers pan for the head, a round pan for the body and mini loaf pans for the legs. I save popsicle sticks and plastic push-up plungers, clean them and keep them in a container to use in multi-layered cakes like this one.

The head was placed on a separate board cut to the correct shape and decorated with a star tip. In the body I placed four popsicle sticks, cut to correct height and then decorated the bottom layer using the star tip.

I used ready-made chocolate and vanilla frosting from the grocery, tinting a little of the vanilla to pink for the snout and Wilton ready to use black frosting in a tube for the eyes, nostrils and hooves. If the ready-made frosting seems a bit too thin for decorating I add some confectioner’s sugar to stiffen it.

The legs were cut to the correct shape and height and secured to the cake popsicle sticks, and then decorated. The head was placed on the body and a row of stars used to hide the board beneath the head. The horns are an “It’s a girl” bubble gum cigar cut in half and inserted in to the head.

This cake was fun and easy to do, but I think I got the snout to big, next time I will make it a little smaller. I hope my birthday cake picture helps you create your cow cake! 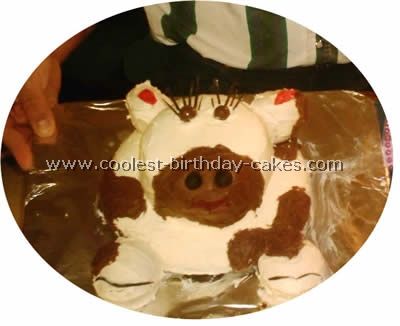 My daughter decided that she wanted a cow cake for her 3rd birthday. This one was sooo cute and easy. As you can see in the birthday cake picture, you make a 9″ round, 1 dome shape (Pyrex bowl works great!) and 3 cupcakes. You cut one cupcake in half for the ears and the other 2 are feet.

Cake by Jessica H., Hudson, IN 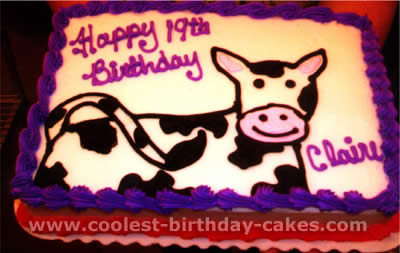 The people I made this for found the cow birthday cake picture in a coloring book. The best way to make this cake is to draw the outlines first, then go over with the black icing. To make the pink icing I only added one or two drops of pink to the buttercream frosting. I had fun making this cake and the people where completely MOOOOved by it!!! 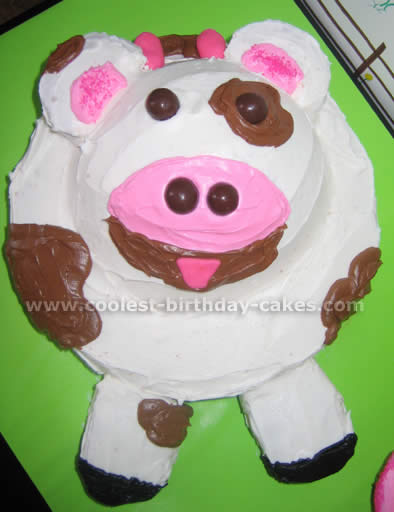 My daughter loves animals, so for her 2nd birthday I decided to go with a Barnyard theme. I made a Cow cake and farm animal cupcakes – chicks, pigs and sheep.

Attach head, ears and legs with frosting and secure in place. Frost the entire cake with white icing. Fill a pastry bag with chocolate icing and pipe in spots on body and head. For the inside of the ears and the nose/mouth I dyed the frosting pink and piped in. The eyes and nostrils were Whoppers. The tongue and horns were fondant dyed pink. 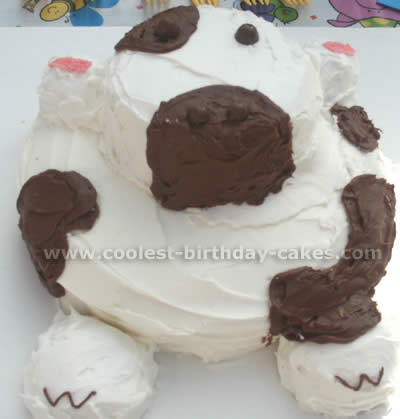 This cow cake is very simple to make, I got the idea off an internet birthday cake picture search result. To make it you need two round cake pans (once the cakes are made, put the smaller on the larger). Then frost with white, chocolate and a bit of pink frosting. Use candies or chocolates for eyes and nostrils. The decorating took more time that I thought. I was up until 2AM!