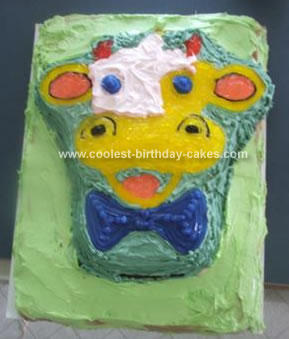 For icing I went to a popular ice cream restaurant and they sold me the jell icing. I used it for the red, blue, pink, black and red, for the white, and green colors I added the jell icing to cool-whip.

I put the black out-lines on first and then the filled it in. Then I put the greenish color around the edge. This store also sold me the crunchy stuff for the middle which I put into the cow and base. This was not easy to make but my 2 year old boy turned 2 on Friday the 13th and I couldn’t pass up making him a cow cake.

The ice cream store also sold me the large box and piece of card board to put the cake on. All for under 20.00 so well worth it since this was a very large cake.

Some of the icing I had to put on while the cake was in the freezer. I wanted an ice cream cake shaped like a cow so I made my own. It’s not black and white, but we raise Angus. So neither are they. My boys still see this cake and say “that’s miles cake”. Makes a mom proud.