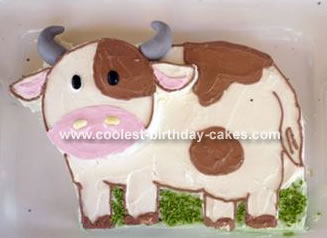 The bottom layer I carved into two ears, crumb coated them, and put them in place. All the left over cake scraps were devoured by my two small children.

I then carved out the shape of the cow’s body and frosted the whole thing with vanilla buttercream for the white body, then tinted some buttercream with pink dye to form the cow’s nose and ears. The rest of the buttercream I mixed with cocoa powder to make it brown. I used that to frost the spots, and used a small round (#4) tip to pipe the outline.

The eyes are licorice jelly beans, the nostrils are vanilla jelly beans, and the horns are fashioned out of gumpaste with a touch of black dye to make them grey.