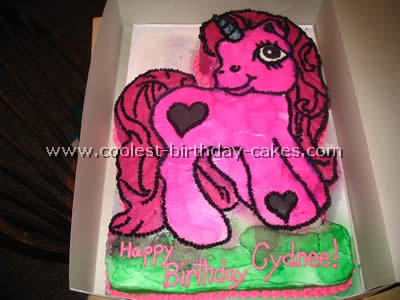 This cake design is hand drawn and then cut to shape.

My Little Pony Cake by Karen B., Hartland, VT

My soon-to-be five-year-old twins love puzzles. So I came to this site to get ideas for some creative puzzle cakes, to my surprise there weren’t any. I even “Googled” for ideas and didn’t find anything. So I dropped the idea for a little awhile until I saw that my local Dollar Tree store had a wide selection of puzzles all for a dollar, hhmmmm… CHEAP party favors! I asked the girls what they wanted for a cake and they said ‘My Little Pony’.

I decided to make a puzzle My Little Pony cake and give each child attending, a puzzle of their own. I even got foam infant puzzles for my younger guests. The cake design was very simple; I made four 13×17 cakes and placed them on their own cake board. I cut out a classic puzzle shape from each one and attached to the piece corresponding to it so there would be a perfect fit.

I then proceeded to simply decorate with a simple flower tip (I have no idea what size) a cake design of one of my girls favorite My Little Pony puzzles. It didn’t take very long, but I would recommend that you place all four cakes right next to each other before cutting out the pieces and scratch the full picture into the cake top before separating to get a more perfect picture. My dimensions were off from corner to corner because I “eyeballed it.”

I am glad I took the pictures of the whole cake before because if you notice in the picture with my twins getting ready to blow out the candles only the two top cakes are present.

A “helpful” family member locked our 1-year-old Labrador in the same room as the cakes and he ate the bottom two cakes!!!!

I was mortified that my 6 hours of work was ruined before any of the guests got to see it, but my most loving girls patted my shoulder and told me it was “okay the cakes were beautiful and Newt [the dog] thought they were yummy.”

This cake design was made for a friend’s daughter on her 4th birthday. It is a My Little Pony cake design. The cake was made using a coloring page picture found online. The cake was iced white with buttercream icing and the pattern enlarged and transferred onto the cake using the toothpick (dot to dot) method.

The sides of the cake were iced pink using a star tip. The top border was orange star-swirls and yellow stars and the bottom border was rainbow star-swirls. The colors I used for the rainbow swirls were pink, orange, yellow, green, blue and lavender. The cake itself was a sheet cake consisting of 2 cake mixes.

I used regular cake mix and made a round cake. I used Pillsbury white whipped icing as a background and used gel coloring for the rainbow colors. I placed miniature My Little Ponies (that I detached from key chains) on the side of the cake and used candy letters for the title.

I made this cake for my daughter’s 5th birthday party. She wanted to have a My Little Pony Party.

I created this cake design to resemble one of her gifts – she was getting the My Little Pony Butterfly Island. I baked two 9-in round cakes and stacked them on the cake plate. I also baked a 13X9 in cake. I colored icing for grass and water. I frosted both cakes to have water meeting at grass. I connected the cakes with rainbow colored pipe cleaners.

On the top cake I inserted the pipe cleaners between the 2 layers. For the bottom cake I put a dollop of white frosting to cover where they were poked into the cake. I picked up a pack of the plastic My Little Pony decorations and a couple of the larger ones to add to the cake.

The flowers and writing are the cake candy that you can find anywhere. I also used the blue and green cake glitter to give some more dimension to the cake. Needless to say my daughter was thrilled with her cake design and excited that she got to keep the ponies after they were cleaned up.

For this cake design, my mom used a Betty Crocker chocolate cake mix and rented a Wilton Rocking Horse cake pan to make this cake. Instead of making a rocking horse though, we extended the legs of the horse to reach the bottom of the cake and turned the “rocker” into grass the pony was standing on.

My sister and I decorated the cake and after mixing all the required colors used a star tip for filling in the pony. Then we used a ribbon tip for creating the grassy area at the bottom, and used a small round tip to create the hair, the pony marks (rainbow and hearts) and lettering.

A dab of black icing on a toothpick is what we used to finish up the eye, mouth and nostril on the cake design. We had a great time decorating this cake and at the birthday party lots of my daughter’s friends were ooohing and ahhhing over the cake. They all recognized it was Rainbow Dash.

The cake store I shop at had this My Little Pony kit to use in creating your own cake design and then it turns into a little purse for the birthday girl. I made slightly smooth green grass and then used the grass tip to create a line of grass to separate the grass from the water.

Using two different shades of blue, I made the water, created a rainbow across the water and made a “cloud” effect at the ends of the rainbow. It was also suggested to use the handle of the purse over the water and put clouds around the bottom. The kit also comes with a Rainbow Dash pony. Everyone just loved the cake design!

I really like to use whip cream and Jell-O pudding to make the frosting. It’s very delicious and easy to prepare. I just rented a bake pan for this cake design and the rest was my imagination.

This cake design is based on a cake from the book Lovable Characters by Debbie Brown. I made it for my daughter’s 5th birthday and she loved it, as did all the kids at the party.

I used a 12″ cake board and rolled green fondant out on it, trimmed edges and wrapped the board with ribbon using piping gel to make it stick. I used two 8 inch round cakes plus a 9″ round cake. I then stacked the cakes with the bigger cake on the top to create the slight overhang of the roof. I rounded the edges of the 9″ cake to make it rounder. I then placed the whole thing on the cake board.

I iced the whole cake in buttercream then put white fondant around the house. I then used three different layers of yellow fondant (each smaller than the last) for the roof, using a knife to score the edges to give it a straw look. I cut out the door and windows and placed them on. I used a forget me not flower cutter from Wilton to do the small flowers out of fondant and used buttercream to make them stick.

I modeled the little bushes out of green fondant then added more flowers. I also modeled the My Little Pony heads in the windows using colored fondant. I used royal icing to make them stick (I supported them with cups until dried) to the windows.

The pony in front is actually a “fun” meal toy from a well know fast food place. The cake design was just the right size for the toy. You could also model the pony out of fondant if you lacked the toy.

My daughter loves My Little Pony so we chose to use the Wilton Precious Pony cake design pan to make Rainbow Dash. Her entire party was themed and I painted a picture of the Rainbow Dash for a game called “Pin the Symbol on the Pony”. I used a basic butter cream for the frosting and the cake design is fudge marble.

This is an old Wilton cake pan that I borrowed from a friend, but I have seen them available on auction sites. Hopefully Wilton will re-release the pan.

I didn’t use their suggestion for the cake design; instead I copied my 3-year-old’s favorite MLP, Rainbow Dash! This cake design was a huge hit!

I created a stencil of the pony cake design on a sheet of paper as big as the cake and then used Wilton’s blue spray and sprayed in the body. Then I free hand filled in the mane, tail and other details of the pony.