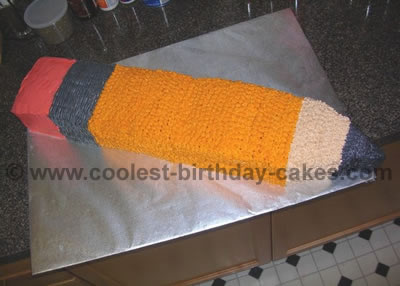 I was asked to make a cake in the shape of a pencil for the coworker of a friend of mine. They were having an office celebration and the lady was known to use pencils quite a bit. I couldn’t even remember when the last time was that I used a number 2 pencil so I was mostly going off of memory and looked at a couple of pictures on the internet to find inspiration for this unique cake decoration.

The first thing I did the day before baking the cake was coloring the icing. I still can’t believe how exact I got the colors. For the pencil color, I started mixing equal parts of orange and yellow and once the shading was pretty good, I put in a smidge of brown to darken it a bit.

For the eraser part of the cake, I mixed in pink and orange and a smidge of red and brown to get almost a terra cotta color. For the wood part, I used a very small bit of brown. And for the lead and silver band, I used black….more for the lead than for the band.

The pencil-shaped cake decoration was one layer of chocolate and one layer of vanilla. Each layer was baked, cut in half lengthwise and laid end to end with a bit of buttercream as glue. (One layer on top of the other). On one end, I cut the cake into a triangular shape for the tip of the pencil. I chose to use a star tip to do most of the icing (#16 or #18) although that takes more time.

For the eraser part, I smoothed it on so that it had the smooth look of an eraser. For the silver band I also dusted on some silver petal dust to give it a shimmer.

The cake fit perfectly on a full sheet cake board, laid diagonally. It was actually pretty simple, just took quite a bit of time and patience but really fun to do!

Have fun with your own cake decoration ideas!