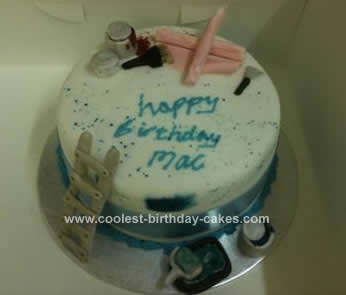 I baked this Decorator’s Cake for someone we know, I was told he used to be a painter and decorator hence the cake I made.

I baked an 8 inch Madeira cake, sliced it through the middle and filled with jam and butter cream. I then covered with butter cream and placed in the fridge for an hour to chill.

I then started to make the decorations for the cake. I made a scraper by molding some flower paste, this dries really hard. I colored this silver on the end and brown on the handle.

I then made 3 tins of paint, two of which had the lid off. When these were dry I painted the tins silver and painted one of the opened tins with red paint and the other in blue and made drips down the outside of the tins like they had been used.

I made a roller out of the same flower paste. I colored the handle silver and the roller in blue to match the tin of paint I made earlier. I then made a paint tray for the roller, colored in black and added the blue inside for the paint.

I rolled out some white flower paste and added a tiny bit of red and kneaded this to give a marbled effect to make two rolls of wallpaper. I rolled out two sausage shapes and cut off the two ends so they were flat, then I rolled out an oblong shape to attach to one of the rolls of paper as if the paper was open.

I made a pasting brush with the flower paste using my modeling tools. I made the bristles. I painted the handle dark brown and the bristles beige.

I added a little brown color paste to some white flour paste icing and kneaded it to make a marble effect then I rolled out some long thin sausage shapes. I then cut these down to the size of the ladder I wanted. To add the rungs on the ladder I just cut smaller ones and flattened them slightly then with a little water I attached them to the sides of the ladder by pressing the end of a modeling tool into it as if it were a bolt.

Now the cake was chilled so I rolled out some white icing, enough to cover the cake, smoothed this over the cake and cut off excess icing then I piped icing in blue around the base of the cake. I then wrote on the cake in icing and the made splashes of paint over the cake by watering down some blue and red color paste.

I then attached all the items I made earlier eg. decorating tools and wallpaper. Last of all I attached some ribbon in blue around the center of the cake. Then I placed the ladder when it was dry up the side of the cake.