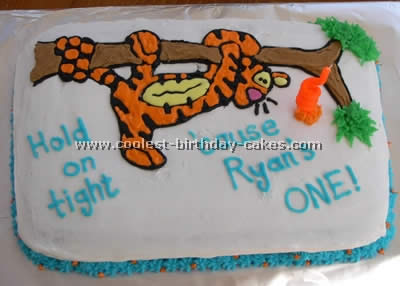 For my son’s first birthday we threw a Tigger Party and I came up with this cartoon cake to match the theme. I baked a 9×13 vanilla cake (vanilla cakes are easier to ice than chocolate because the crumbs don’t show as much!) and made icing with shortening and icing sugar. I iced the cake in a white base. I found a picture of Tigger on the internet that I liked, printed it out and using it as a guide “drew” it out onto the iced cake with a toothpick.

I then used black Wilton icing in the tube to trace my design. I thinned out some of the icing with water so that it would come easily out of the piping bag with a small round tip and “flooded” inside the black lines with colored icing. I then piped in the writing with regular consistency icing and piped the border with a star tip. I used a leaf tip to add the leaves on the tree. The cake was a big hit!

My daughter was obsessed with the Tigger Movie at the time of her 4th birthday. Hence this Tigger Cake made of two layers, one chocolate, one vanilla, jam and cream in the middle, and the frosting was just a thick butter frosting.

To keep the Winnie the pooh picture cake from having a single crumble but still being as moist as ever, we added a bit more butter to the mixture from what it said on the packet of just adding milk and eggs.

After whipping up thoroughly we sat the mixture in the fridge for about 3 hours and then rewhipped once taken out. That is our secret to the moistest cake ever.

We got the design off the internet, and then printed it out to a much larger scale, and then cut out the baking paper we then had traced onto.

After assembling the cake, we placed the cut out on top of the cake, then sliced around to form the ‘Tigger’ shape.

I freehanded the design onto the cake. Tigger’s stripes were done in Chocolate.