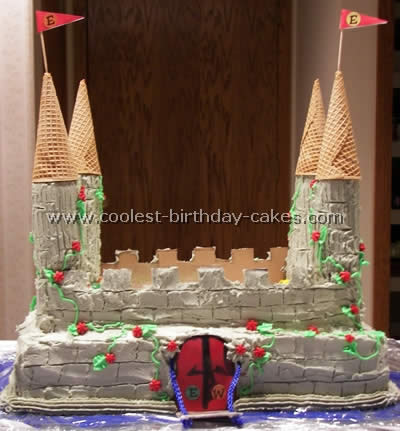 I am not a great decorator but when my grandson wanted a castle cake for his seventh birthday I had to get inventive. The cake is made of three 9 X 13 stacked layers made from one of my castle cake recipes. The additional walls are cut from cardboard (clean of course) that is iced on the outside to blend in with the rest of the cake.

Toothpicks were used to give it the stone/brick look. The icing a homemade mix of confectioner’s sugar Crisco vanilla and water. Papertowell rolls washed and covered with icing made the towers which were topped with sugar cones.

For the towers I took five cupcakes and placed them on the corners and one on the top. I then placed a sugar cone on each cupcake and used icing to hold them in place. For the door and windows I used white chocolate candy bars and the trim around each layer is strawberry whoppers. The little girl loved this cake and it is really not too hard to do.

For my daughter’s fourth birthday she really wanted a castle cake so using this site and some other castle cake recipes on the internet I came up with this one. There was only about 10 kids so I used a box cut in half and wrapped in fondant for the bottom and the top was a 12″ strawberry cake ( everything had to be pink!) also with fondant icing.

The towers were cupcakes with an upside down sugar cone. I then just piped in the windows and gate added some gumdrops around the side and voila!

My daughter Alice’s wanted a castle cake for her fifth birthday. I used two chocolate cake mixes made from one of the castle cake recipes on this site. For the bottom layer I baked two 8″ square cakes. The top layer is two 6″ round cakes. The leftover batter for the round cakes I used to bake the five cupcakes. To decorate the cupcakes I just made a border with a large star tip then used icing to glue the ice cream cones in place.

The flags are tooth picks with ribbon taped to them. I stuck more toothpicks into the bottom of the cupcakes to keep them attatched to the cake. The windows doors and bridge are white chocolate bark cut to the right shapes. Shoestring licorice is used for the ropes on the bridge. I used blue plastic wrap to wrap the platter to give it a watery look. Sugar cubes are used for the walls of the mote. Everyone at the party loved the cake and the kids had fun eating it. When I was cleaning up we were all wondering what to do with the sugar cubes and ended up making a game of who could throw them the farthest. It was an outside party.,

I made this cake for a friend’s daughter’s birthday party. She wanted a princess theme so I thought a castle would be appropriate. I followed one of the castle cake recipes from this site. The cake was made in a 12″ x 16″ sheet cake pan. It was a sponge cake that I made from scratch and tinted half of the batch pink so that I could have a swirled effect when it was cut. The icing is plain old buttercream.

To construct the cake I cut the sheet into two 8″ x8″ cakes and eight 4″ x 2″ pieces. Then the bottom was made by cutting the 8″ squares horizontally filling them with marshmallow cream and stacking all the layers together on top of each other. After that I stacked two of the 4″x2″ pieces together in the same way and built the top layer of the castle with the resulting stacks.

Everything was then frosted and I used mini marshmallows for the crenallations. The towers were made of ice-cream cones stacked one upside down and one upright with melted chocolate holding them together. Then the tower top was an upside down waffle cone filled with cookies (just for fun and to feed a few more kids). All of this was frosted and the high towers were sprinkled with little heart candies. The stained glass windows were melted lifesavers and the drawbridge was a graham cracker. The inside of the courtyard was filled with Hershey kisses and the “ground” was crushed cookies.

Overall I think it turned out pretty good and the kids seemed to enjoy it.,

I made this cake for my son’s seventh birthday. I looked at the many castle cake recipes on this site and this is what I made. I used a 1/2 sheet pan and two square cake pans and a total of five cake mixes and seven cans of frosting. The color of the frosting changed somewhat overnight. I started with a grey and it ended up grey/ purple/blue. I spray painted the paper towel rolls silver for the towers.

The turrets are sugar cones placed in wafer cones. The cones are frosted then rolled in sprinkles. The most surprising touch is the Draw Bridge and windows. They are made out of warmed Tootsie Rolls. Just roll them out and cut into shape. Good luck!

I used a 10” two layer round cake base and an 8” square cake cut to 6” square. My idea came from the many castle cake recipes on this site. The turrets were made from sugar paste wrapped around a plastic-covered tube. Bricks were cut in with a knife. Top two turrets were made from sugar paste and the bottom two is ice cream cones. The tops were covered with thinned royal icing and sugar glitter sprinkled on. These are held in place with royal icing. The flowers are royal icing.

The sugar paste decorations were made in advance and were just added the day before the party. I used a buttercream frosting between cake layers and to frost cake. Sparkler candles were placed behind the castle in the back and Disney mice and princess added to the fantasy. This cake was a lot of work but well worth the effort.

I made this cake for my daughters fifth birthday which was inspired by this website for castle cake recipes. It’s just a simple three egg chocolate cake recipe. I made it in three layers and used a round shaped ceramic bowl to get the dome at the top. Upside down ice-cream cones make the turrets which I iced and sprinkled with colored castor sugar. It gives it a sparkle effect.

Put the castor sugar in a bag and shake with a few drops of food coloring to give it the desired colour easy! I just used a butter icing colored with gel coloring. This cake was so simple to do and I didn’t tear my hair out once. I had a very happy little girl indeed. Thank you for having such a great website.

I took all the castle cake recipes from this website and just put it all together. This cake was my first so it took a while for me to put together. I baked the cakes one day before and I assembled to square bottom staked and two rounds for the top. Then I used cupcakes for the corners and used a straw to hold the cupcakes together. I frosted the day before and it took about three extra large containers of frosting. I leveled the cakes as well.

I used a cake board from the baking store party. I used sugar cones for the top towers on the corners and made my own flags representing where my daughter comes from,The Philippines, Mexico, Ireland and American four year old princess. I used dot candy to put the flags on then inserted it onto the cones. The needle thing does not work well. It breaks the tips of the cones.

I added everything else the day of her party. I used her toy horses and princess characters. I used green for the frosting for grass and white chocolate bar for the bridge and milk chocolate for the door. I used the chessman cookies for the windows and I used a skewer for the drawbridge chain. I used purple icing and pink icing for everything else. It was fun but a lot more work than I anticipated.

I made this castle for my daughter’s fourth birthday. It is a white chocolate cake with white chocolate buttercream. I got the idea from the 2008 Wilton yearbook for castle cake recipes. It was very time consuming and a little hard but I think I pulled it off. The towers came in a kit from Wiltons which were really hard to put together.

I bought the princesses at a Disney store. the base is a large round piece of foam wrapped in marble fondant. The two little cakes were chocolate with candy melt accents. I think I did pretty good to be my first big cake.

This cake was a challenge. First I made two 10×13 cakes using castle cake recipes from this site, stacked them on top of each other then frosted them. I used large muffins for the towers and stacked them two on top of each other holding them together with wooden Kabob skewers. I placed one going straight down and one diagonally into the 10×13 cake in the center. Then I added frosting to the towers. I used fondant for the look of stone.

The draw bridge is a white chocolate bar. I coated the ice cream cones in white chocolate and rolled them in sprinkles let them dry then placed them on top of the towers.

Directions: I searched many castle cake recipes and this is the one I made. I greased and floured baking pans; lined muffin cups with bake cups. Prepare one recipe cake batter (see White Cake recipe below); divide evenly between prepared square pans. Bake in 350 degrees oven about 30 minutes or until a wooden toothpick inserted near centers comes out clean. Prepare second recipe white cake batter; fill prepared round pans and muffin cups half full. (You need five cupcakes for the castle cake. You will have enough batter to make a few extra cupcakes.) Bake in a 350-degree oven about 20 minutes for cupcakes and about 30 minutes for round cakes or until a wooden toothpick comes out clean. Cool in pans on wire racks 10 minutes; remove from pans. Cool cakes and cupcakes.

For square cake spread about 1/2 cup white frosting on top of one square layer; top with other square layer.

To finish cupcakes press an ice-cream cone point up into the frosting piped on each cupcake. Fit decorating bags filled with green, orange and yellow frosting with small round or star tips; pipe windows and other designs onto cones. Use ribbon toothpicks and tape to make flags. Attach flags to points of cones using a little frosting. Place four cupcakes on corners of square cake and one cupcake on top of round cake. (If desired, decorate any remaining cupcakes for additional servings.) If desired make trees by decorating additional cones; arrange around castle. For drawbridge position large piece of white candy bar over moat; arrange gumdrops around moat. Attach string licorice to drawbridge with some piped frosting.

To serve remove straws as needed when cutting cake! I did not come up with this recipe. I got it off a different website for castle cake recipes but after making it I thought I would share it with all of you so you could make it also! Hope you enjoy making this awesome cake!