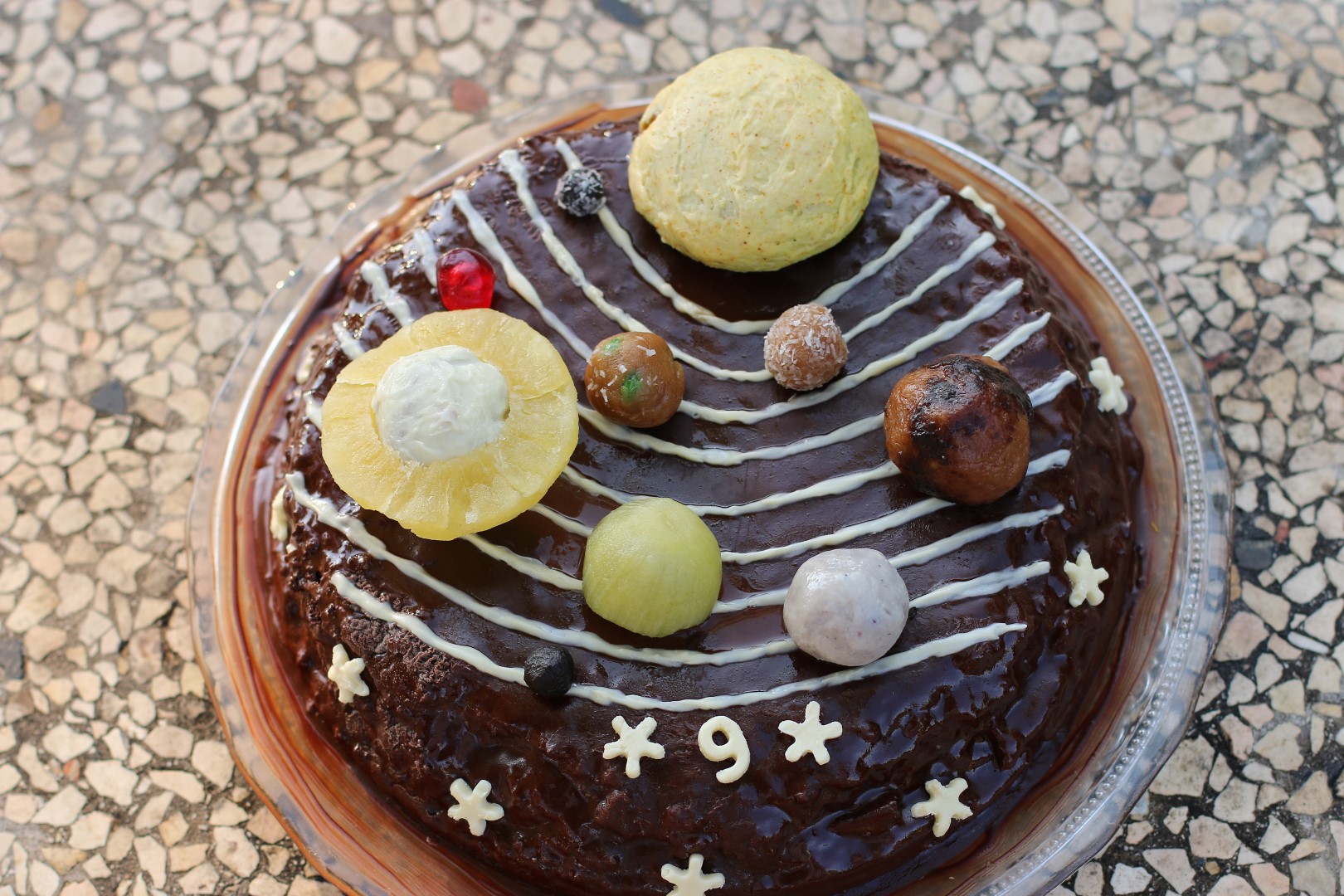 My daughter loves everything related to the space, so she decided her birthday theme would be the space, with a Solar System cake. We reviewed lots of space cakes’ pictures, and researched the planets – colors, sizes, ratio between them… I baked a circle shaped cake, covered it with chocolate and drew the orbit of the … Read more 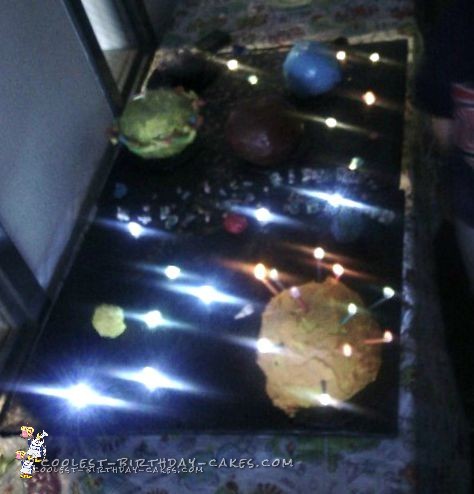 I made this solar system cake for my son who loves planets. This was the second time I made the solar system for his birthday so I wanted to top myself. The year before I put a clock motor into a cake to make the cake into a working clock. I wanted to use the … Read more 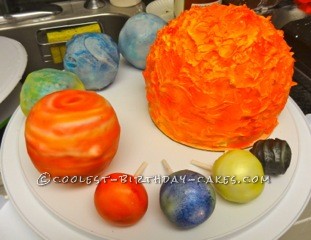 My solar system birthday cake started out small and grew really fast. It was fun to figure out the effects and special characters. I used poured sugar, cake, cake balls, candy and a ton of time to create a cake a young boy would love. All the planets are made of different sized cake balls. … Read more 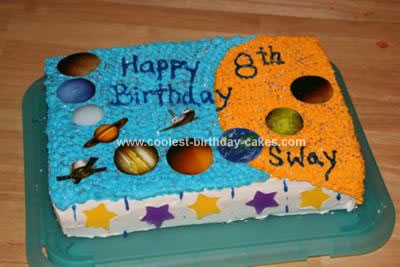 With inspiration from Mary Kay of thepartyworks.com I was inspired to do this solar system birthday cake after my daughter came to me and asked for a solar system cake the week of her party. I freaked out when I saw some of the cakes because I have never taken a baking or cake decorating … Read more 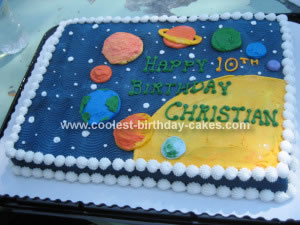 This Space Birthday Cake was made for my son Christian on his 10th birthday. He’s an avid space/planet fan so I made him a cake of the 9 planets. I Googled planets and came up with the exact order they come in and what they look like, colors etc, and based this cake off of … Read more 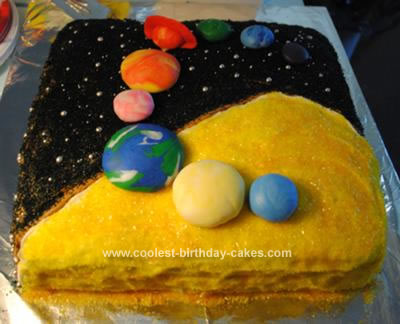 I made this Solar System Birthday Cake for my son’s 6th birthday party, and he helped me make most of it. To make this cake, we baked 3 9×13 inch chocolate sheet cakes. We put one on top of the other, then cut the third in half lengthwise, stacked the halves, and lined them up … Read more 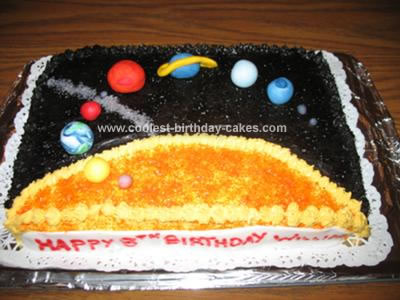 My son created the layout (after looking at pictures of other birthday cakes online) on paper for this solar system cake for his eighth birthday party. I baked a 9×13 single layer chocolate cake (recipe from Hershey’s cocoa box). I used white frosting tinted orange with food coloring for the sun, and topped it with … Read more 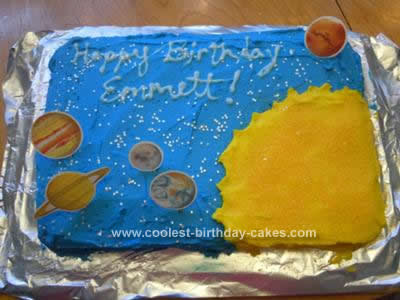 My son and I looked at lots of pictures online to get ideas for his Space Birthday Cake Design. We got a lot of good ideas from this site! I used gel icing coloring in sky blue and yellow to dye some homemade buttercream icing. I spread the icing with a knife and did not … Read more 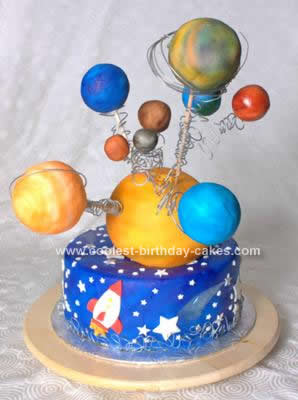 You know when your idea is greater than you have energy for? This Planet/Space/Solar System Cake was mine! I started with a double chocolate cake mix. Yes I use cake mix, I don’t consider it cheating when you spend the next 15 hours decorating it. Two 10″ with Buttercream icing in the middle. I also … Read more 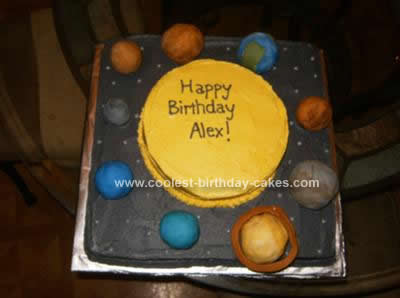 My friend mentioned to me that her son was turning 4 soon and that he was really into the planets right now and asked if I could maybe come up with a design for a cake and do it for him. I gave it some thought and did some research on the planets before coming … Read more 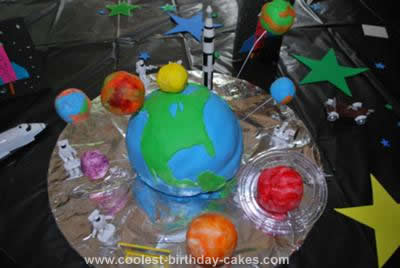 My son wanted a solar system cake for his 7th birthday party. He really wanted the main cake to be Earth and the other planets orbiting around it. I am still learning cake decorating tips and thoroughly enjoy making fun cakes for my children’s birthdays but still have lots to learn. Earth is made out … Read more 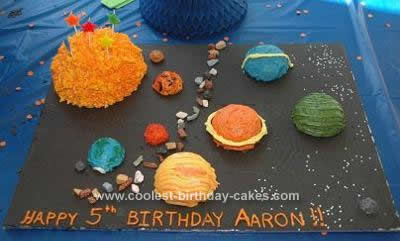 We made this Homemade Solar System Birthday Cake for our son’s 5th birthday. He knows all about the solar system and informed us of many details that should be included. First of all, he is in love with Pluto and insisted that we include the dwarf planet. Second, Uranus got hit a long time ago … Read more