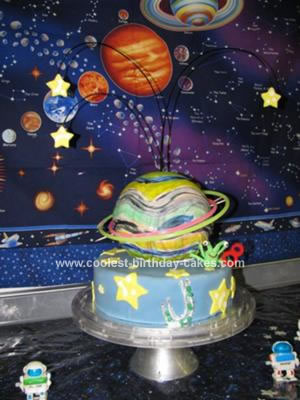 My son wanted to have a science/space themed birthday party at our local science museum for his 8th birthday. He wanted a planet cake that was not from our solar system.

Day one: baked the cakes, filled and crumb coated them. (put in refrigerator)

Day two: covered cakes in fondant and painted the planet. Finished the details of the decorations (once fondant is on the cakes must stay out of the refrigerator but are safe because the fondant seals them)

Day three: Served them at the Party!

This cake is a chocolate cake with chocolate frosting and Satin Ice fondant icing. We have many lactose intolerant and kosher members of our family so this cake is pareve (milk-free). I substituted non-dairy creamer (Mocha Mix) for the whole milk and margarine for the butter and it turned out great. I used store bought chocolate frosting to save time and keep it pareve but a chocolate buttercream frosting would be great or a cream cheese frosting.

The cake is made in two parts. The bottom is made from two 9 inch layers and the planet is made from a Wilton sports ball pan which is two halves put together. Both parts are covered in rolled fondant. The bottom fondant is colored with blue and black and kneaded to evenly spread the color before rolled out to cover the cake. I used about 1.5 lbs. of fondant. Then I colored some more fondant yellow and rolled it out to cut out the stars. I attached the stars with a water/meringue powder paste.

The fondant for the planet started out white, then I added black and red and kneaded it until it was marbleized then rolled it out to cover the planet. To add the swirls of colors (gas rings like on Jupiter) I painted the fondant with food coloring mixed with a little bit of vodka. The alcohol evaporates quickly keeping the fondant from getting wet and falling apart. The base cake has three dowels in it to support the planet.

The details. I made the stars that hang from the wires with fondant stars as well. And I sculpted the alien with fondant and drew the mouth and pupils with color writers. I wanted the cake to glow so I made the rings out of glow in the dark necklaces, I added glow in the dark star stickers to the stars on the front of the cake (need to take them off before serving!), and I added a light up letter “J” for my son’s name out of licorice wires and LED lights. The tray the cake is on also lights up and sings happy birthday. So we turned out the lights to sing and it looked awesome!