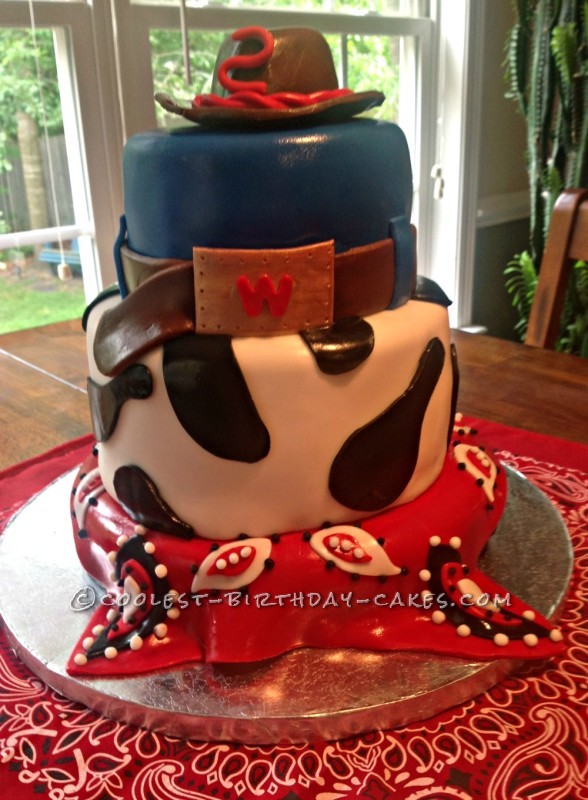 This western cowboy cake was made for my grandson for his second birthday. He lives on a mini farm and loves all of the farm animals as well as horses. He loves to dress like a cowboy and wear his western boots and cowboy hat, so this just seemed like the best cake to make … Read more 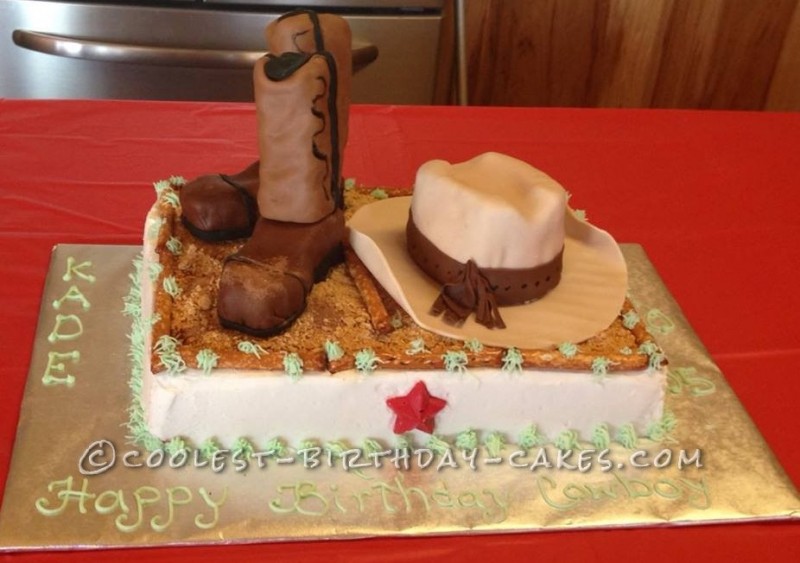 This Cowboy Boots and Hat Cake was made for a special little cowboy to celebrate his 8th birthday.  The cake itself is a vanilla butter 1/4 sheet cake, which I made starting with a boxed mix and then altered (gasp #1). The icing is crusting homemade vanilla butter cream. The cake was baked using the … Read more 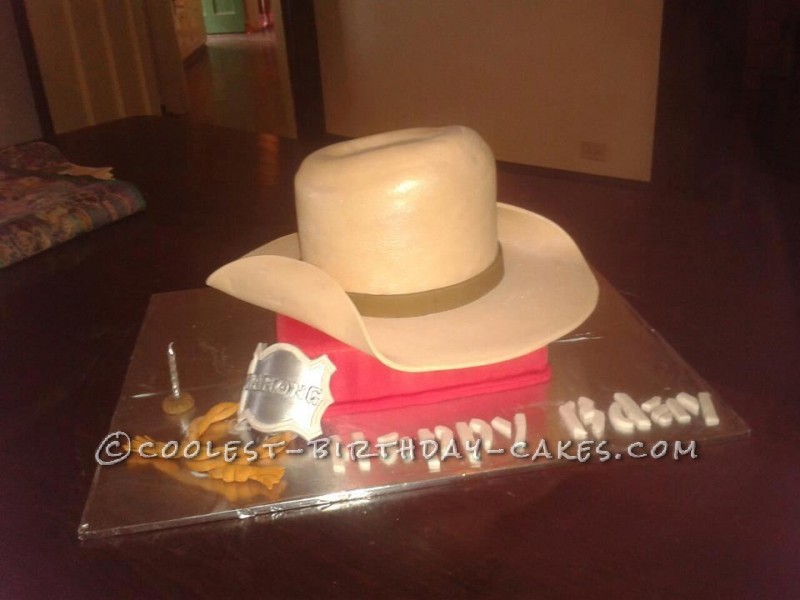 This Akubra Hat cake was done for a mate who is a real all round man of the land and former bull rider. Rarely ever seen without his Akubra hat on his head, he was turning 40 and I was asked to whip something up. I decided I would try to replicate his famous hat. My … Read more 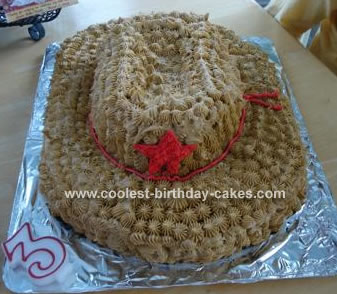 For my daughter’s 3rd birthday, we did a cowgirl themed party and I wanted to find the perfect cowgirl hat cake but could not find one or a pan to make one, anywhere so I made one myself. I started with a 13 x 9 sheet pan for the base of the cake/brim and then … Read more 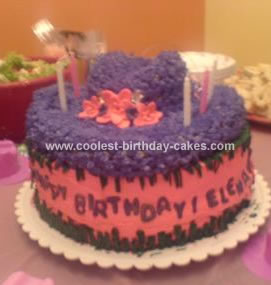 This Cowgirl hat cake is a 15″ double layer cake with the hat made of one solid rice crispy treat shaped into a hat. I shaped it and put into the fridge to harden. I think if I make this again I will make the hat a bit smaller, because it softened up and wasn’t … Read more 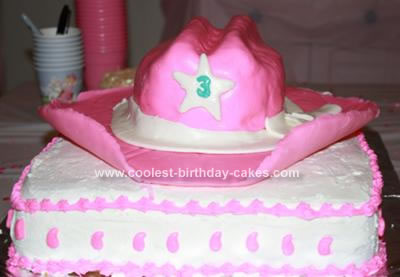 My daughter’s 3rd birthday was a cowgirl party, so of course I had to make her a homemade cowgirl hat cake! For the hat, I used (3) 8 inch round cakes… I used Wilton’s cake release all over the pan before pouring in the batter (make sure to cool it COMPLETELY before attempting to remove … Read more 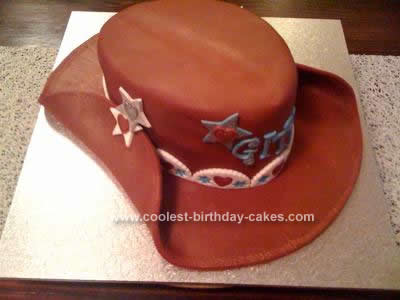 My masseuse Gitta was turning 45 and for her birthday she was off on a horse riding adventure in the States! So, what was more appropriate for her birthday than a Cowboy Hat Cake Design! To make this cake I stacked 2 oval shaped cakes on top of one another and carved the top one … Read more 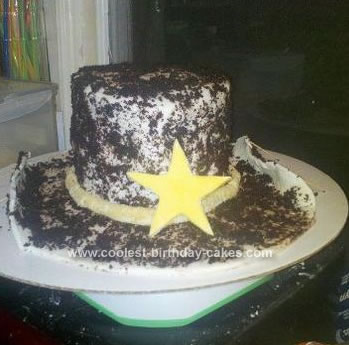 I made this Cowboy Hat birthday cake with 2 9 inch round cakes. The brim of the cake was made with marshmallow fondant. I had an old hat that my father in law gave my husband and I put plastic wrap over it and rolled out a thin 1/8″ round of fondant, and laid the … Read more 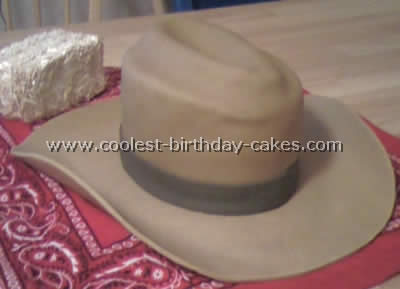 I made this cake for my dads 60th birthday. I searched this site for cowboy birthday cakes and this is what I made. The brim is rolled fondant cut to fit over the brim of an overturned cowboy hat covered in wax paper and left to dry for two days. The top part is an … Read more 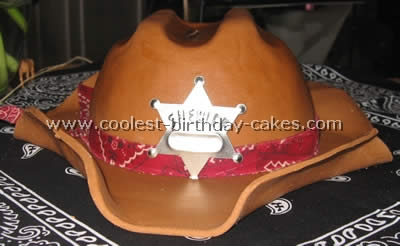 I used natural white cake that was baked in an oven safe glass bowl. Then I used a thin layer of buttercream frosting before I applied the fondant. I used foil rolled up and covered in a paper towel to shape the fondant how I wanted it. Then I let the rim of my hat … Read more 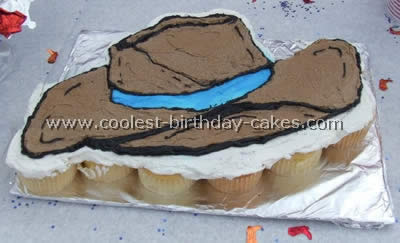 These are what is called pull-apart-cakes which are just cupcakes stuck side by side in any shape and iced and decorated like you would a cake minus the sides. I searched clipart for the pictures I wanted. After I found the right pictures I shaped the cupcakes and iced with white icing. I then took … Read more 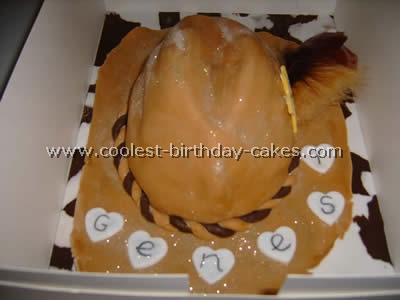 I made this cake for a western evening at my local dance club. As with most of the cakes that I make; we raffled it off and raised money for our club funds. I covered the board with a thin layer of fondant and allowed this to dry. Next I rolled out a shape to … Read more 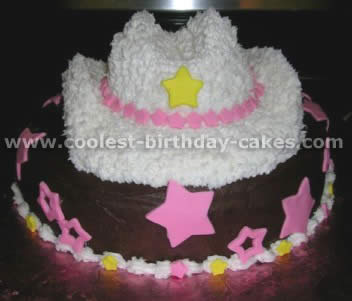 We started with a 12X2 round cake pan. We sliced the cake in half and filled it. We covered the cake in chocolate buttercream frosting. We did a shell border along bottom of cake. We used Wilton star cutters to make the stars. We colored white fondant pink and yellow. We used various size stars … Read more 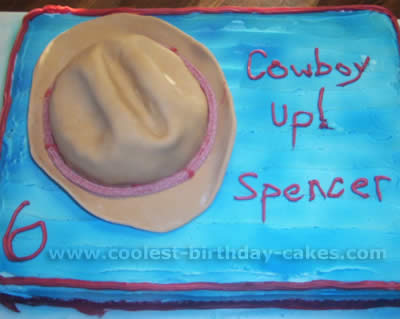 I just baked a large sheet cake and decorated it. For the hat, I baked it out of a small mixing bowl. I then covered it with icing and put it in the freezer (because it is easier to trim icing when cold). I made small cuts into the cake, trying to make it look … Read more 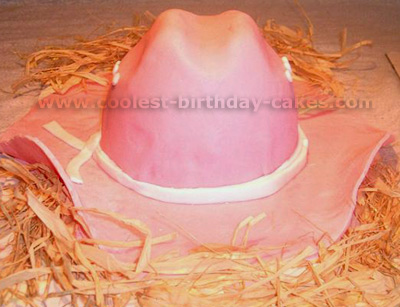