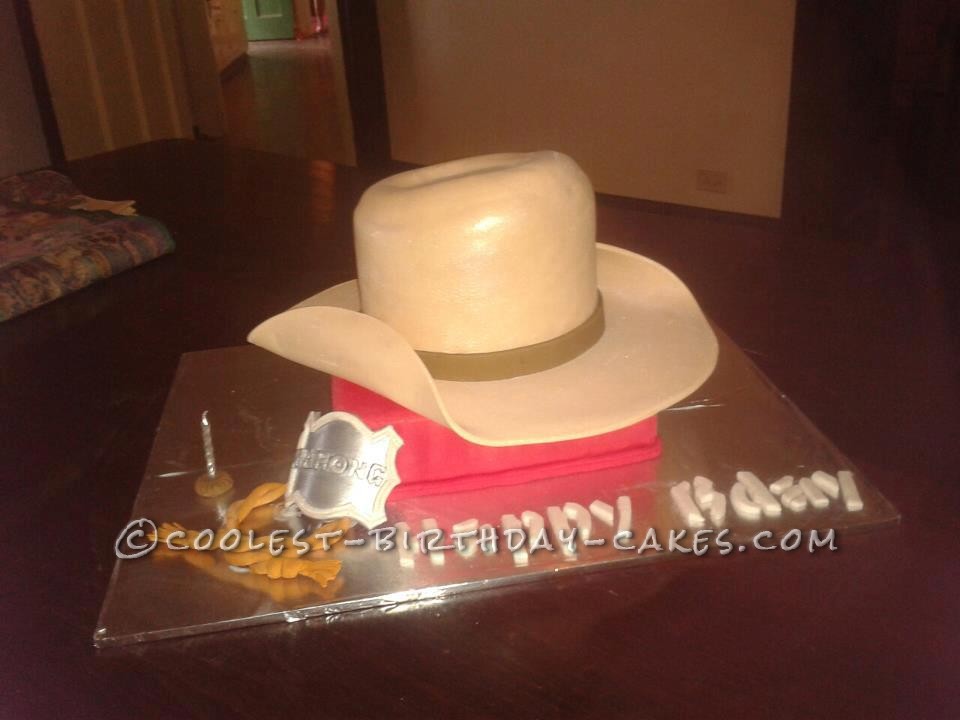 This Akubra Hat cake was done for a mate who is a real all round man of the land and former bull rider. Rarely ever seen without his Akubra hat on his head, he was turning 40 and I was asked to whip something up. I decided I would try to replicate his famous hat. My doubting hubby said not to get my hopes up, which done nothing but make me try to prove him wrong, lol!!

The cake was a choc mud with Frangelico butter cream and dark choc ganache. The base cake that the hat sits on supported a gum paste brim and then the cake that made up the crown of the hat. The belt buckle was hand made and shaped on a plastic cup and allowed to set for a week and and had their property’s name on it. The rope was made out of leftover fondant. The brim was made a week and a half earlier using glad wrapped deodorant cans to sit either side of it to form the shape.

The hardest part about this cake was the time it took me, from start to finish it was a bout 18 hours as I was teaching myself off YouTube as I went along. I hand painted the buckle silver and made all the trim using a ruler and scalpel. You cant see it in the picture but on the other side the hat even had a hand made badge that had Akubra written on it. Everything on the board was edible except the candle and aluminium foil!

Funniest part of the cake was that a friend of the birthday boy actually thought his hat was sitting on the cake and tried to lift it up and put it on his head! This resulted in some quick patch work from me!  The birthday boy’s reaction when he seen it was amazing. He viewed it from the doorway because he was unsure what it was an thought we had bought him a new hat as a present. When I told him it was his cake he was in disbelief and overwhelmed, he kept saying  “noooo, no, really? “. Needless to say I received a huge bear hug and the nite was a huge success. The cake was very hesitantly cut into and the buckle saved for a keepsake!