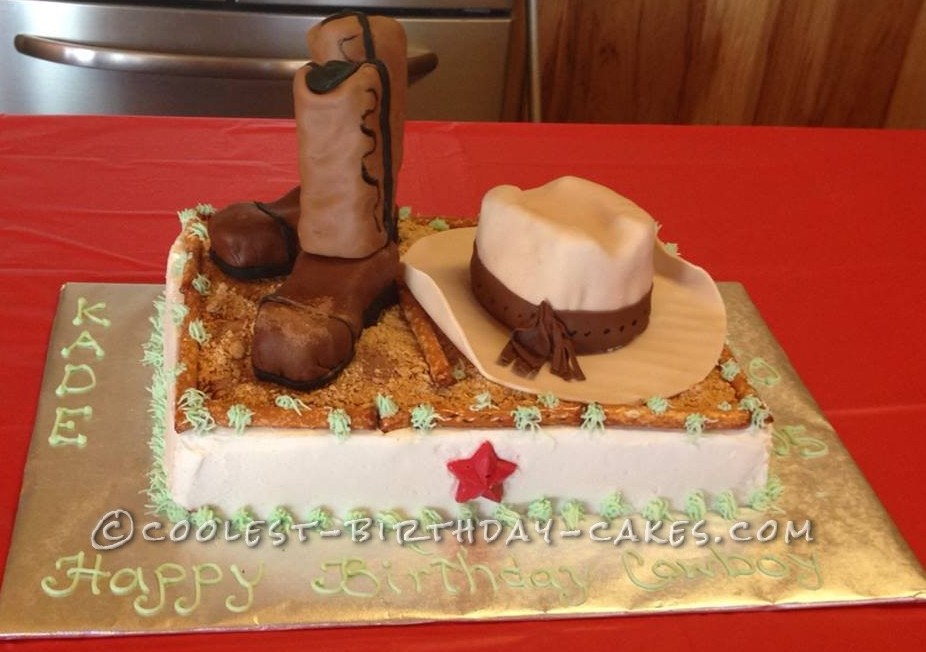 This Cowboy Boots and Hat Cake was made for a special little cowboy to celebrate his 8th birthday.  The cake itself is a vanilla butter 1/4 sheet cake, which I made starting with a boxed mix and then altered (gasp #1). The icing is crusting homemade vanilla butter cream.

The cake was baked using the Wilton baking strips to keep it from burning on the edges and from puffing too much in the center. I always take my cakes out of the oven and softly press any puffiness with my hands and a paper towel placed directly on the hot cake to make it nearly flat. Then I let it cool about 15 minutes before turning it out onto parchment paper letting it finish cooling COMPLETELY on a rack before I (gasp #2) put it in the freezer wrapped VERY well…for at least a day.

The hat is a little fondant covered 6 inch chocolate cake that I baked the same way with a formed fondant brim and trim. I rolled out the chocolate Wilton fondant, using a rolling fondant cutter to cut the band. I came back with a No. 5 round piping tip to make the “tooling” holes and covered it with plastic so it would remain pliable.  The tassel was made with a wider piece of fondant strip and cut to “fray” the ends.  I played around with its shape and left to dry a bit.

The brim is tinted white fondant that I rolled out and cut into a round shape. It was formed by rolling the two opposite sides on my fondant rollers (too curly) , replacing with rolled  parchment paper and propped up until they dried for about 24 hours. Just had to keep working with it and propping and using whatever I could find to make it keep its shape.

I must admit here, I first tried tinting the fondant with very tiny drops of Amerigel  to make the light brown color I wanted and didn’t like what I got, so I decided to do it by adding little pieces of chocolate fondant to the white to make enough light brown fondant for the hat and part of the boots. It sure is a little bit of a guessing game. But too much is better than not enough I’d say when working with any color. And I had plenty.  After it dried,  I placed the brim on the finished cake top first.  I cut out the top of the “hat” (cake) to make it a cowboy hat shape and then covered the little chocolate cake with the tinted fondant and placed it on the brim. The chocolate fondant band and tassel were added with touches of icing.  My husband does have a cowboy style hat and I did get that thing out and placed it right beside the cake.  Helps  to have a 3-D model!!!

The boots are fondant covered rice Krispies with some graham “dirt/dust” that must have kicked up from the “dirt” on the cake. I just worked with the Krispies until I got the bottom of the boot part the shape I wanted…made the heel separate.  A digital scale came in real handy to start with the same “sizes” of boots.  But mostly it was a lot of eyeballing and setting side by side. I even went on line and enlarged some boots to get a better look. I made the top (leg parts) with Krispies and then rolled out the fondant and wrapped each part before putting a dowel stick in to attach the leg to the foot part of the boots. This did NOT work…even with some gum paste glue.  So I took the little black fondant off the tops (“shadow”) and put 2 longer dowels all the way through both parts of  the boots and into the cake.  Tadah! It sure was a learning experience!

The main cake was trimmed with a pretzel stick and butter cream grass border.

It was truly a fun cake to work on, minus the twirling boot lesson.  When I asked the birthday boy what he liked eating the best…he did not hesitate. “I liked eating my boots (with a wide cowboy grin)”.  His Dad picked up the cake and was full of compliments on how he thought it was a really great cake; I thought it was a big compliment especially since he used to be a real rodeo cowboy himself.  After the party they all let me know how much they enjoyed it.