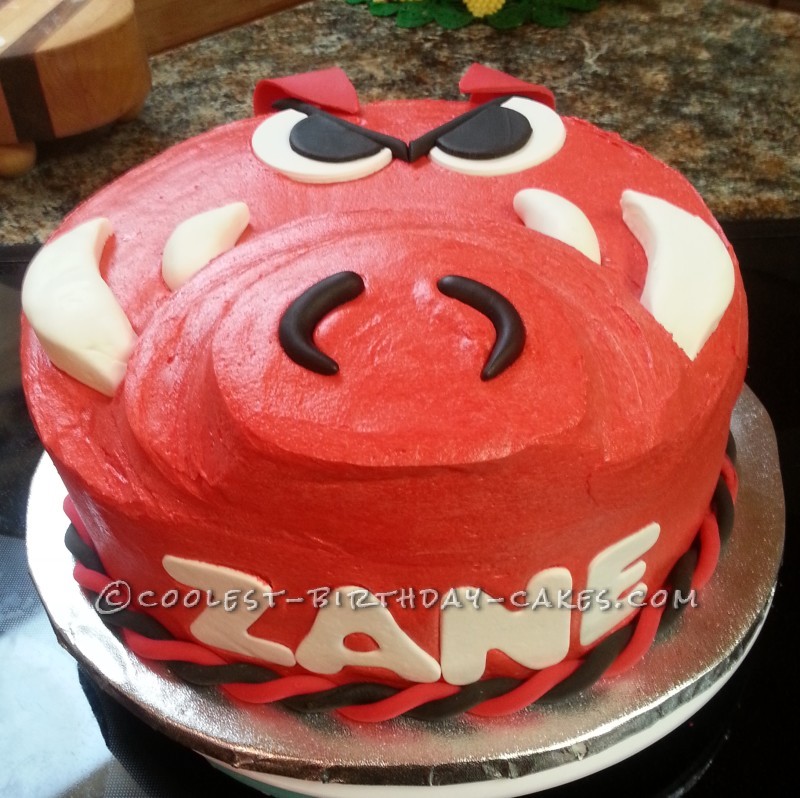 Here in southwest Arkansas we love our beans and cornbread, fried potatoes, sweet tea and yes ma’am we love our Razorback Hawgs. Why one of the first things we teach our precious babies is to call the hogs!! Woooooo …. pigs…. Sooie !  can be heard throughout our state as we cheer our teams on … Read more 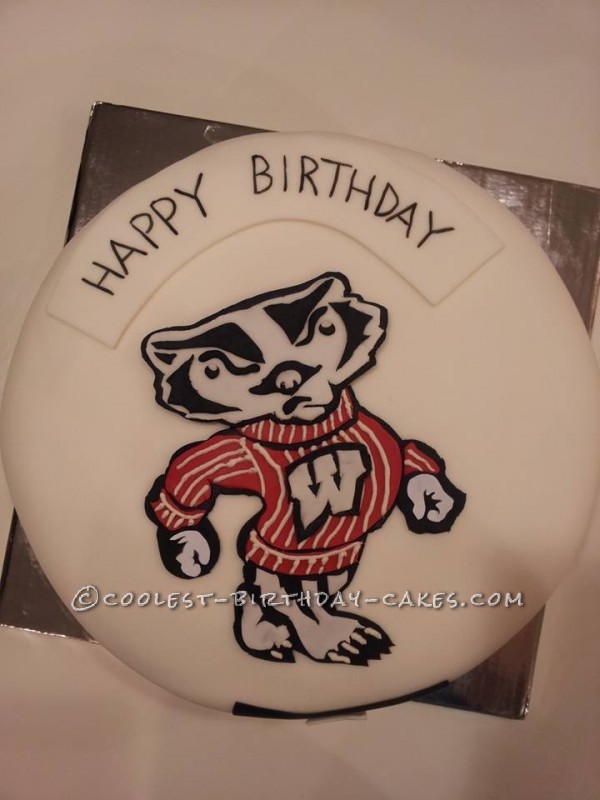 My son is a huge fan of Bucky the Badger, the University of Wisconsin mascot. For his recent 6th birthday, he asked for a Bucky Badger cake, so I was busy making mental plans as to how to make one.  At the last minute, the Blackhawks won the Stanley Cup, and he decided he wanted … Read more 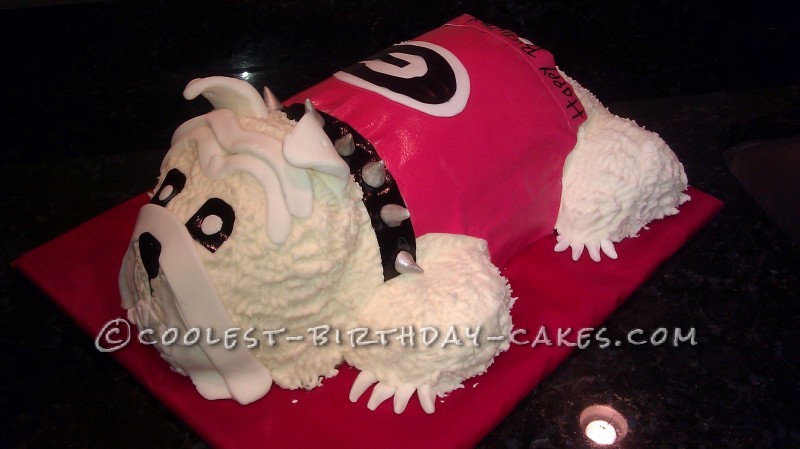 I am not a pro and only make cakes for friends, family and friends of family. My first attempt at making an animal was a daunting one. This die-hard University of Georgia fan wanted a cake resembling Uga, the college mascot. He is not only a huge fan of this college and their football team … Read more 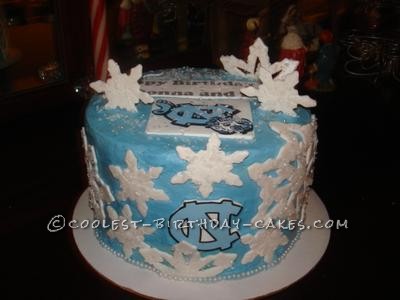 This Tarheel Snowflake birthday cake is three 8 inch cake layers of white almond sour cream cake recipe.  Snow flakes were made from cutters I bought on line, using marshmallow fondant and Wilton sugar crystal attached by using glue made from gum paste and water. The symbols and birthday message were printed from my edible printer on sugar sheets.  Using … Read more 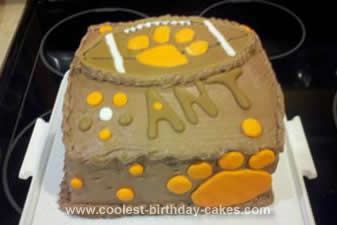 I made this Clemson Birthday Cake for my cousin’s boyfriend’s birthday. He loves Clemson. We live in SC! I made 2 square 9 in. cakes. Then stacked and iced them with chocolate buttercream. I used a picture and taped it to the counter and taped wax paper on top. I then traced the football image … Read more 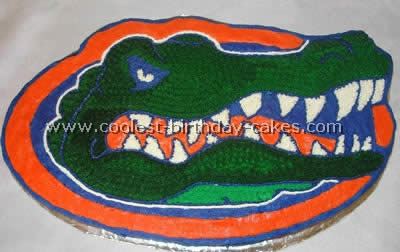 This one was a Grooms cake at my cousin’s wedding! It was a huge hit! I found the idea while searching for birthday cakes online. I started with a rectangle cake (12 X 18). When it cooled I leveled it. Next I used a template I traced of the Gator logo to cut the cake … Read more 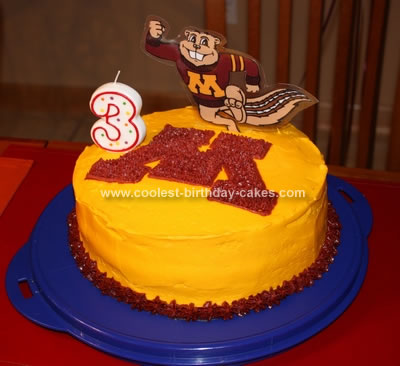 My 3 year old nephew wanted a homemade Goldy Gopher cake. The images I found of Goldy were a little detailed and not anything I wanted to attempt to transfer to a cake at the time (8 months pregnant). Instead I used a #16 tip to draw the Minnesota “M” on the cake, I then … Read more 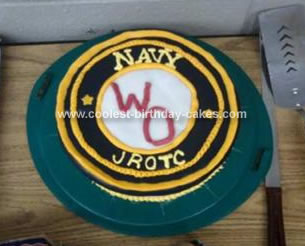 We made this Navy ROTC Cake for the Leadership Seminar August 6th and 7th 2009 at West Ouachita High School. I am a proud cadet in the West Ouachita JROTC Program, C/SN Johnson! Yep… That’s me. So, I volunteered myself to make a cake for our chill and grill that was held after leadership announcements. … Read more 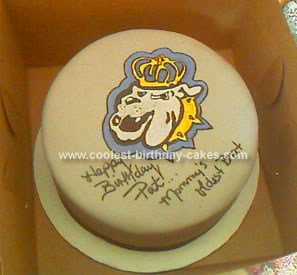 It was my son’s birthday and as you can see on the cake he is a JMU football player. And he absolutely loves my homemade chocolate cakes. So he had an 8″ double layered chocolate cake with chocolate icing. This university emblem cake is covered in a gray fondant. For the logo I printed a … Read more 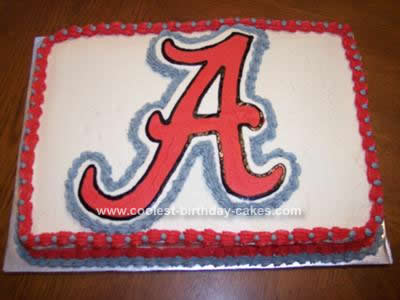 This Alabama Crimson Tide Cake was done by using Frozen Butter Cream Transfer. I taped the picture to the back of a metal cookie sheet and then placed a piece of wax paper over that. I traced out the picture using # 2 tip and black Wilton icing in the tube. I put the outline … Read more 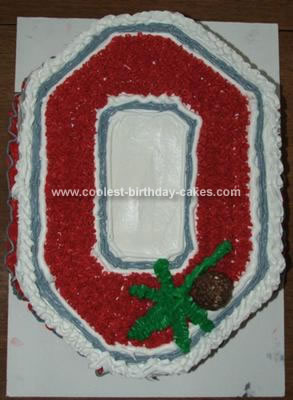 Every year I try to come up with a creative way to celebrate the Ohio Sate University versus Michigan University football game. I decided to make a Block O Ohio State Buckeyes Cake. I used 2 cake mixes and a large sheet pan. The cake took forever to bake, and was slightly depressed in the … Read more 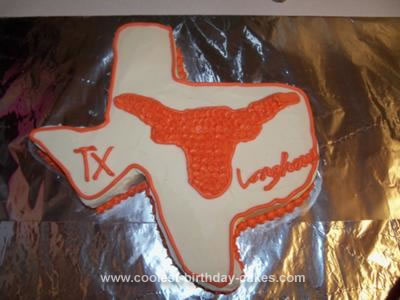 It was a small party so the cake isn’t very big, although it could easily be made bigger. I just baked a 9″ square cake. Once cooled, I shaped it, using a knife, into the shape of Texas. I had to use some of the cut off pieces to get the shape just right. I … Read more 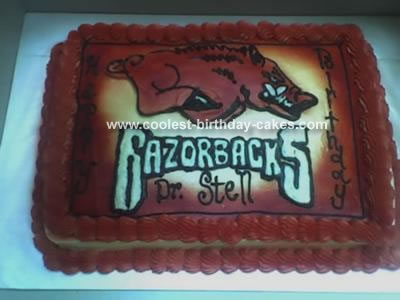 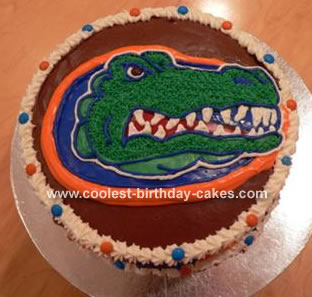 I have had a set of twins babysitting for years now and have known them since they were 2! They are moving up to Gainesville, FL this year to attend University of Florida. So being the cake enthusiast that I am I decided a Go Gators emblem cake was in order! I baked 2- 9″ … Read more 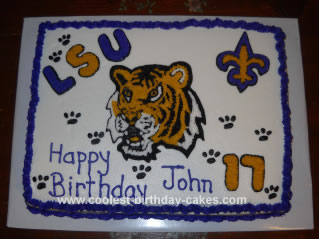 This homemade LSU Tigers birthday cake was made for my daughter’s boyfriend. White sheet cake, butter cream icing. Made transfer from a pic. Out lined with piping gel then placed on cake and lightly smoothed with finger tips, then remove paper. I outlined with black icing all details, then piped in with star tips 13 … Read more 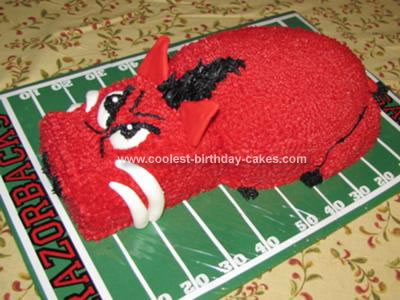 This Arkansas Razorback Cake was made for my brother’s wedding, he is a die hard Arkansas Razorback fan so I decided that this would be a great groom’s cake for him. For the body I simply used 2 11×9 cake pan. For the razorbacks head I used a loaf pan. I carved out all shapes … Read more 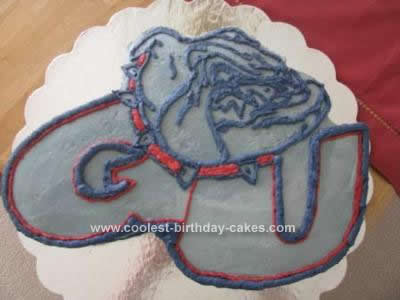 My husband went to Gonzaga Law school in Spokane, Washington (many years ago) so he really wanted a cake that depicted their mascot – the Gonzaga Bulldogs Cake. I looked and looked for a cake for an example but couldn’t find any. So, I check out the schools web page for a good logo. I … Read more 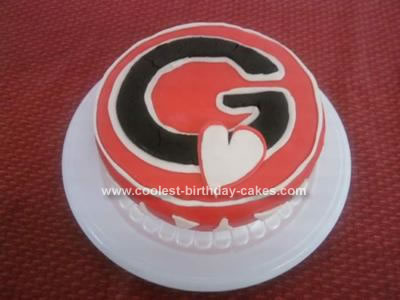 This homemade Georgia emblem cake was a Velvet cake with buttercream icing and layered with fondant icing. I found it took forever to make the fondant color in black. After kneading in black Wilton food color paste for a long time I finally got the right color. The side was made to simulate a dog … Read more 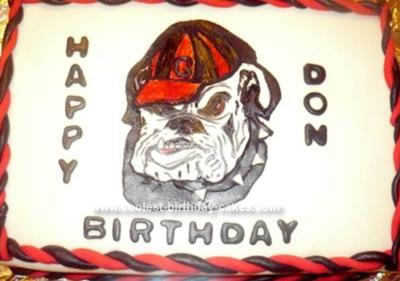 This Georgia Bulldog cake was a 1/4 sheet, chocolate cake. I used buttercream icing to support homemade fondant. I made and colored the fondant a day ahead of time. After the cake was cooled and iced, I let set in fridge. Covered cake and cut a black fondant outline to mat the bulldog. I used … Read more 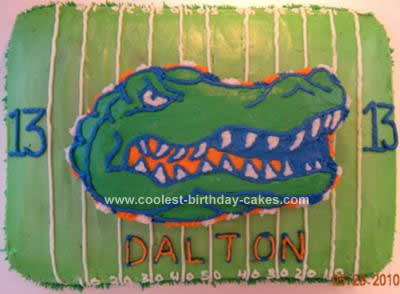 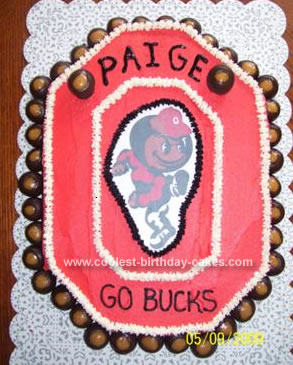 My daughter wanted a OSU Buckeye Block O Birthday Cake for her birthday. I started with an 11×15 cake and cut off the sides to form the block O. The red icing was colored with Wilton paste (red red). I find that this makes the right color of red. I printed a picture of Brutus … Read more 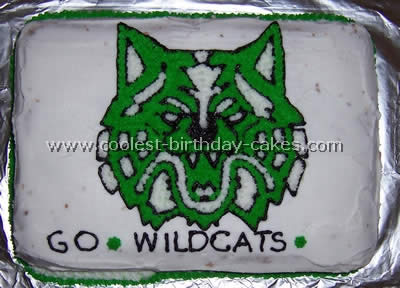 This cake was done for a friend of mines daughters school. I found it on birthday cakes online. It was just a regular 9×13 pan iced with buttercream and using tip #21 for the outside border. And I used piping gel to sketch out the wild cat and then filled it in using tip #16. … Read more 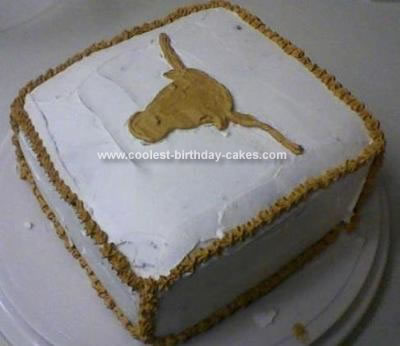 I made this longhorn cake for the UT v. Ohio State Fiesta Bowl. Pretty simple really, I made 2-8×8 inch square chocolate cakes, iced with buttercreme frosting and decorated with a little buttercreme tinted burnt orange. I free handed the Longhorn, which turned out pretty good considering that I am NOT much of an artist. … Read more 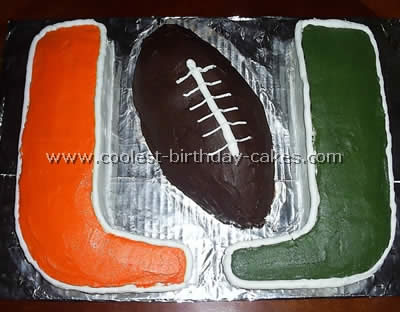 My boyfriend is a huge University of Miami football fan so I decided to make him a UM cake for his birthday. I used a sheet pan for the cake and carved the U and the football by hand. I made a basic vanilla butter cream icing of thin consistency and iced all sections by … Read more