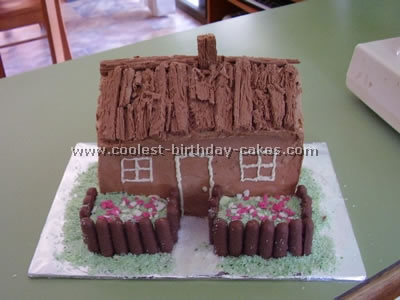 I used chocolate icing, coconut sprinkles, Cadbury flakes, malt sticks and a double square sponge cake. I cut one sponge in half and then set aside with the other cut in half then cut diagonally so you have two long triangular prisms.

Mix up the icing, the stick, stack the two halves on top each other and then place the triangle on top with the highest point in the middle to make it look like a roof. There should still be half of a sponge left over.

Now cut that piece of sponge into thirds and then cut one third in half horizontally and place at the front of the cabin as the garden. Cover in icing and make a fence around it using the malt sticks. Then sprinkle coconut dyed green and spread sprinkles in on top to look like a flower garden (alternatively at the end you can cover the cake in icing sugar to make it look like it was snowing). Light spread a small amount of icing on the tray and sprinkle green colored coconut to look like grass.

Let the icing harden in the fridge then take out and cut the flakes in half then in half again lengthways and place on top of the cake to make it look like logs (hint cut the flake up at room temperature if they are too hard they crumble). If there is any left over, place a piece on roof as a chimney and pipe windows or doors onto the cabin or use biscuits.