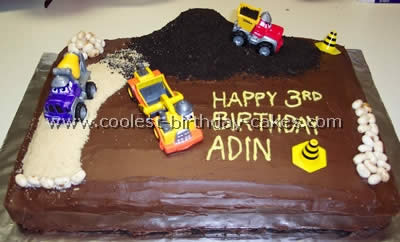 I made this Construction Zone cake for my son’s third birthday. He was (and still is!) very much into all things construction. I found lots of ideas on this website for construction birthday cakes and took a few ideas from several cakes and came up with my own design.

It’s made with an 11×13 rectangular pan which took two mixes of chocolate cake. I iced in chocolate icing and since I was so tentative about beginning, it hardened slightly so it was actually easier to work with the cookie crumbs that make up the roads. They brushed off the areas I didn’t want much easier. The darker dirt road is crushed Oreos and the light sand road is crushed Pepperidge Farm sugar cookies. I spread them on with a spoon. I made the dirt hump by taking just a bit of the cake mix before baking and putting in a small shallow dome pan (don’t know what it’s called, my mom loaned it to me) and baking as well.

I frosted it to the cake and then frosted over it using extra frosting to make the slope gradual. The rocks are just jelly beans with a marbleized look. Sadly they weren’t very tasty but easily removed. I stuck them to the cake with white icing. I purchased the vehicles and washed them first along with the cones and just placed them on the cake. I added a few Oreo crumbs to the dump truck and transported the cake in a cake box to the party location – of course it was at the Missouri Museum of Transportation! Once we got there we put the tool-shaped candles on the cake. The kids loved it and tons of parents asked me where one can purchase construction birthday cakes. 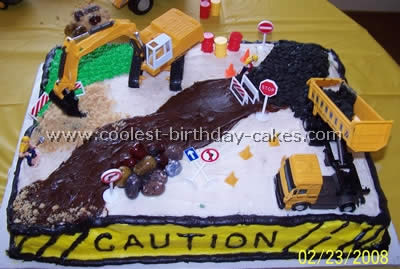 For my son’s first birthday we decided on a construction theme (my husband works construction and since my son loves trucks and such we thought it was perfect!). We actually used some of the ideas from this site for construction birthday cakes to construct our cake and finalize our ideas (thank you!). I started by baking two 1/2 sheet cakes of the rainbow chip cake (for a double layer), used three boxes of cake mix in total. I iced the middle with rainbow chip frosting to add a little something extra. All other frosting was homemade buttercream (yummy!).

We iced the entire cake with a thin “crumb” layer of white buttercream. We then drew out our “road” in the middle of the cake and frosted this section (about 3/4 of the way) with a fudge frosting. The remaining section of road we frosted with asphalt colored (mixed black coloring to white buttercream) buttercream and topped with black cake confetti to look like asphalt being laid. We added some green coloring to the buttercream to make the “grass” and applied using a star tip. We then frosted the sides of the cake with yellow buttercream and then outlined the top and bottom with black to make our “caution” tape and added the words “Caution” along with diagonal lines in black.

We created “dirt” by crushing vanilla wafers and built up the pile by laying down a spoonful of frosting and then covered with the “dirt”. We topped off the cake (and made our scene more realistic) with construction vehicles and such we bought as a 50 piece kit. We had one vehicle dumping the asphalt in the dump part of the truck. We added our “asphalt” frosting with the black cake confetti so that it was pouring onto the cake. We also then added our construction worker who was jack hammering next to the asphalt. The other truck we set up to look like it had just dumped the big pile of dirt (added some dirt to the bucket of the tractor) and put it next to a construction worker holding a shovel.

We topped off our scene by adding street signs, barricades, cones and barrels (all came with the toy kit we bought). It was a huge success and we received a ton of compliments, not to mention the cake was really yummy! We also decorated the cake table with other vehicles to expand our scene onto the table.

Since we were doing construction birthday cakes for this theme I thought a hard hat would be perfect! I started by putting 3/4 of the cake batter into a Pyrex bowl and the remaining 1/4 into a round pan and baked accordingly. I placed the flat round cake (which will come out thin) down first and made sure it was even. I then cut the bottom section off the bowl cake to make bottom flat and even and kept the “discards” to make the bill of the hat. I placed the bowl section on top of the flat cake and centered best as possible (I did not add frosting between these sections in an effort to reduce the amount of frosting for my son but you can add frosting here if wanted). I then took the discards and formed a bill (this was much more difficult than I imagined but is very easy to fix with frosting!).

I created orange buttercream (used yellow and red coloring added to white buttercream) to give it that “construction” feel. I then frosted the entire cake starting with the bill. Once I got the frosting as smooth as possible I made any adjustments that were needed to the bill (mostly cut down and rounded the sides) and then added back any necessary frosting. I also used frosting to make sure the top part of the cake was rounded. I used a circular tip to create the lines in the hat (tried to make it look molded). I then added the words “Boss” to the front in black frosting. 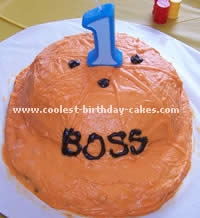 It turned out better than I expected but it was a challenge to make constructions birthday cakes. Everyone loved it though and he especially enjoyed it! Happy baking. 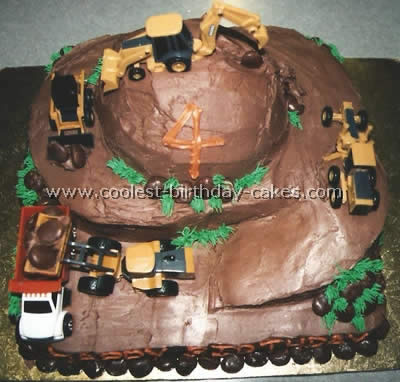 A coworker asked me to make a construction scene cake for her sons fourth birthday. I found this website for construction birthday cakes to be very helpful but it was my husband who came up with this idea. Supplies needed: chocolate buttercream icing, (visit the Wiltons website for recipes), buttercream icing tinted green and orange milk duds cake mixes of choice and construction vehicles (this was a set bought for $10.00 at Wall-mart. Pans used: Wiltons 16″square, 2″ tall 8″ round (bake two) 3″tall, 8″ round (bake with extra batter in it so it mounds up, you may want to put a cookie sheet under it while it cooks in case it runs over).

Take the 2″ 8″ round cakes and cut a half circle out of each so the 3″ mounding cake will fit in between them. This also gives you the cake to build your ramp. Because everything was on one layer I didn’t use dowel rods to help support it and it worked fine. It was a heavy cake so make sure it has a good base. Place all three rounds on top of the square cake. Then create the ramp.

Ice with chocolate buttercream icing (it doesn’t have to be smooth). Place milk duds (which represent boulders/rocks) then using Wiltons tip #233 create grass. I then used a star tip to write his age and a round tip for the Happy Birthday. My husband enjoyed placing the vehicles around the cake. He even placed milk duds and icing in some of the vehicles and had one piece of equipment look like it was digging a hole uncovering more rocks (milk duds). 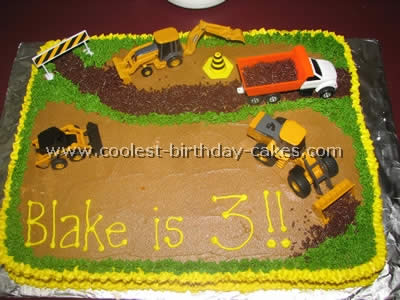 I made this a few days ago for my son’s third birthday party. This was my first time actually decorating a cake and it turned out great. I used two cake mixes (butter and devil’s food) and baked them in the same pan. I got the idea from other construction birthday cakes on this website.

I just combined two or three different cakes that I liked. This was a very fun cake to make and my son was so excited he couldn’t keep his fingers off of it while waiting for his party!

Cake by Karen B., Nazareth, PA 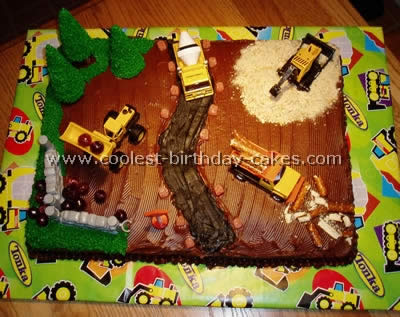 First I want to say thank you for all of the ideas of construction birthday cakes that I saw on this site! This construction zone cake was so easy to make. I used two 11″x15″ sheet cakes as the base. The icing was chocolate with a black icing road in the middle. I used sugar cones with pretzel rods to create the trees. I put mini marshmallows inside the cones to keep the cones from moving. Then I covered the cones with green icing using a star decorating tip.

I used crushed pretzel rods for logs, crushed vanilla wafers for sand, sour balls for rocks, mini orange slices for pylons, a few new trucks and a plastic fence and sign from the toy box. 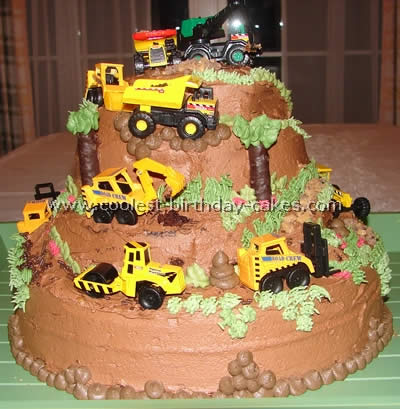 This construction cake was made for my four year old son’s birthday and technically our theme was “dirt” since he’s all boy! You will need a 12″ two layer, 8″ one layer and a 6″ two layer cake. Also you will need cake circles and dowel rods for stacking.

I used chocolate sprinkles and Heath bar bits for the rocks and sticks. The trucks were bought at Target. Stack your layers off center to leave room for trucks. Using a serrated knife, carve away parts of the top two layers to make a road. Ice cake with chocolate frosting and place trucks. Add trees (I used chocolate cookies found in the candy aisle – Twix would work too) and begin to add grass (use a leaf tip and a grass tip) and rocks (round tip). I used two shades of green for the grass. Add flowers (star tip) and rocks and let the party begin!

Good luck with your own construction birthday cakes!