I used to be a cake decorating show addict (Food Network Challenge, Ace of Cakes, Cake Boss, etc.).   My husband used to make fun of me because I don’t cook and I don’t bake, but I would watch these shows incessantly.  Those who can’t do, watch others do on TV!  Then I had kids and #1 stopped having time to watch cake decorating shows, but #2 wanted to make awesome cakes for my kids.  I remember when I was little my mom had a stand up bear mold and she made that bear in to so many different things for my sister and I.  It was always the best part of my birthday, and I wanted my kids to have the same kind of memories.  First let me say I have no training of any kind.  My mom knows how to do a few different piping techniques of butter cream and has shown me a few of those, but other than that I am a complete novice.

Every year I have my kids tell me what type of cake they want, and then I head to the internet for inspiration (and directions!!).  This was the first cake I did for my son.  It was for his third birthday.  He was absolutely obsessed with all things construction equipment.  I mean, at three, he could tell me which equipment had outriggers and why (at 35, I still didn’t know this stuff, and quite frankly, could have lived another 35 years without the knowledge…).  Anyway, with my very first foray in to the cake making world, I needed something quick and super easy. 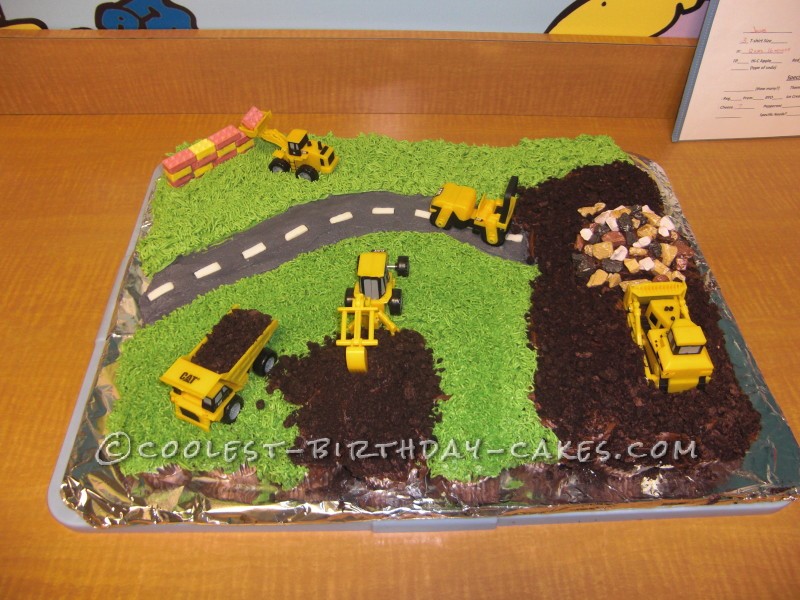 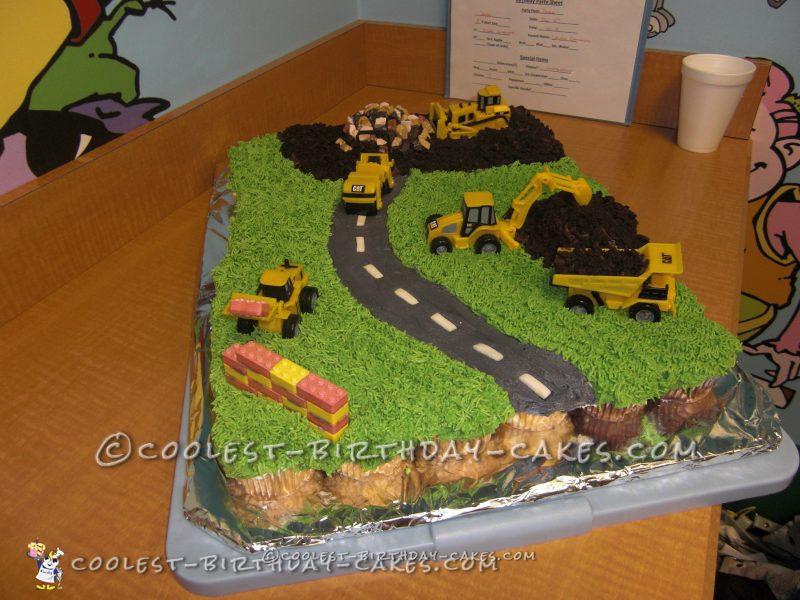 I had my mom make three dozen cupcakes and butter cream icing (did I mention I don’t cook…).  I asked her to make green, grey, and brown icing.  I went to my local bulk candy store and found chocolate candy rocks and candy Lego bricks.  Then I got chocolate Oreo cookies from the grocery store (they have to be the ones with the chocolate filling, or your dirt will look white.

I laid out all the cupcakes into a rectangle and did a smooth layer of green icing just to hold them all together.  I then picked my spots for “dirt” and iced them brown.  I put the chocolate Oreos in to a Ziploc bag and smashed them up.  It is hard to tell from the picture, but I took a single cupcake and put it on top of the others to create a hill for some dimension.  Then I covered the entire area in the Oreo crumbles and topped off with chocolate rocks.  I then made my other dirt area in the same way.

I drew on my road using the grey icing and just got it as smooth as I could.  You don’t have to worry about the edges because you can cover them with grass.  I then took the white insides of stacked licorice candy for the lines (you can also use gum cut up, but this was for three year olds…).  I then iced the rest of it green with a grass tip.  I placed the mini construction vehicles (found at Walmart) with the bulldozer plowing the rocks, the digger on the dirt pile and put more dirt in the back of the dump truck.  I used the grey icing as mortar in my Lego wall.  Super simple and the whole thing only took a couple of hours to assemble. 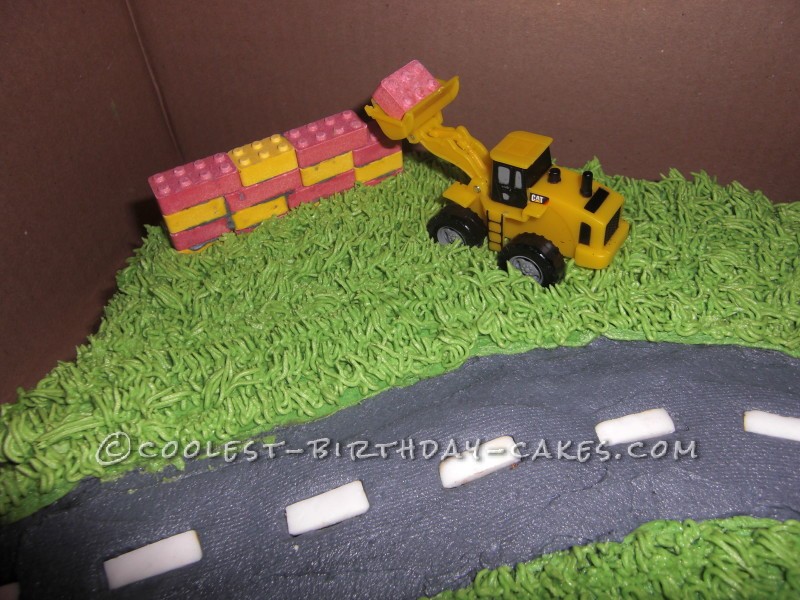 The Wall and Road 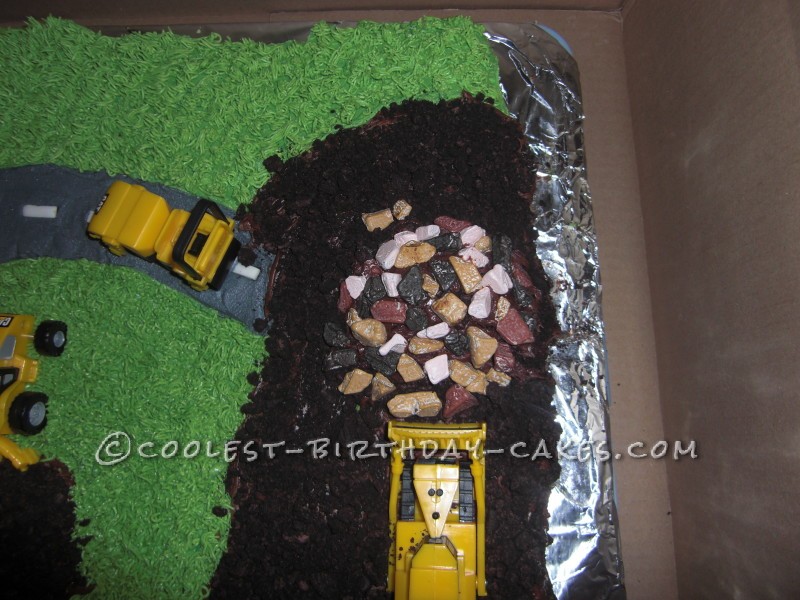 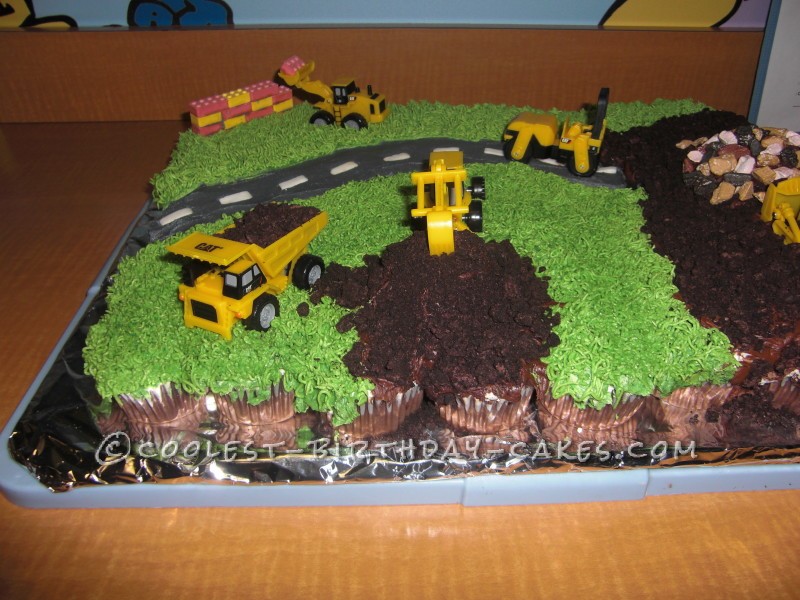 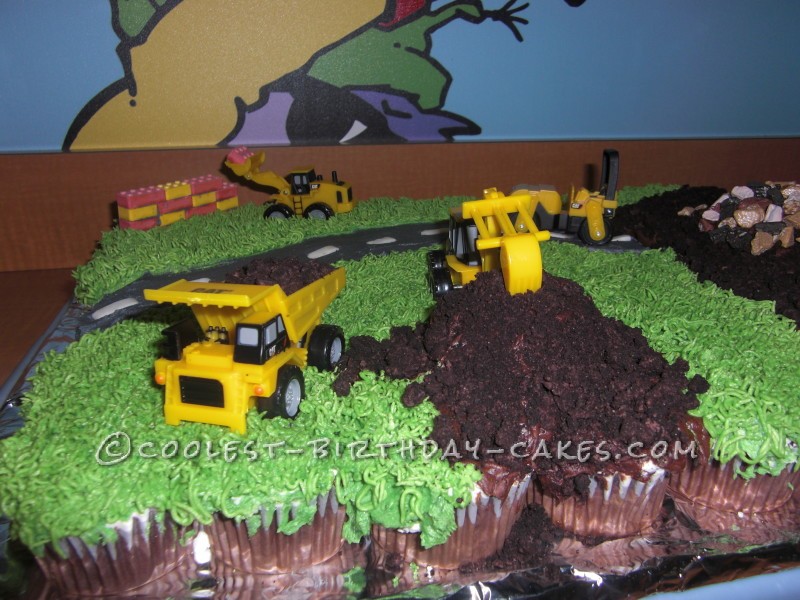 All the kids loved eating the “dirt” and grass and “wall”.  It was also super easy at the party, because no cutting is required.  You simply take a cupcake from the edge and work your way in.  The left half of the cake was vanilla cupcakes and the right half was chocolate.  My son absolutely loved it, and the construction vehicles were then part of his birthday present.