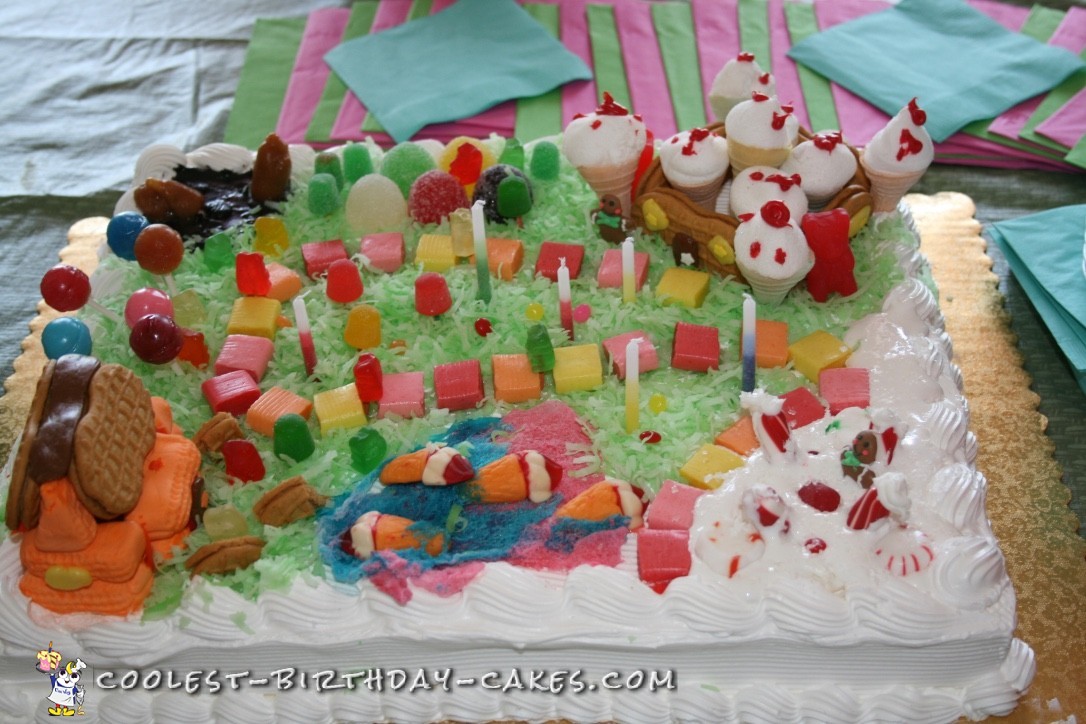 When my daughter was turning 6 (8 years ago now), I went online to look around for birthday cake ideas. I found coolest-homemade-cakes.com to be an invaluable wellspring of ideas, and it’s been my go-to source of inspiration ever since. It was hard to choose between so many creative themes, but we finally settled on a Candyland cake (and went on to design the party around it.) In order to focus on the decoration, I took the shortcut of ordering a premade cake, iced white. The grass landscape was made of coconut tinted green, and I used Starburst candies to make a path.

The structures were next. Gramma Nutt’s house was walled with marshmallow Circus Peanuts, and roofed with Nutter Butter sandwich cookies. I flattened out Tootsie Rolls to make the door and the peak of the roof, and used a flower-shaped cookie sprinkle for a doorknob. The windows are flattened Starbursts.

King Candy’s Castle was walled with Nutter Butters, and the towers were actually ice cream cone-shaped marshmallow candies that I found at the checkout counter of Toys R Us. Again, the door is a flattened Tootsie Roll with a flower sprinkle for a doorknob, and the windows are flattened Starbursts.

I made the perfect Ice Cream Sea the night before the party. Out of cotton candy. And felt really dumb the next morning when I found that it had melted right out from under the adorable gummy ice cream cones I had embedded in it. I put more cotton candy on top (to keep the ice creams partly embedded), but it melted before the party started, too. Oh well. It looked sort of foamy at least.

The Molasses Swamp is actually fudge sauce (my store had it in the dessert toppings), with Sugar Daddies stuck in it for reeds. The Sugar Daddies tried hard to wilt into the swamp before the party started, but they were still upright when the birthday girl blew out her candles.

I made the Lollipop Forest out of lollipops (obviously), and the Gumdrop Mountains out of spice drops.

Lastly, I scattered some colorful miniature candies around for flowers, peopled the cake with gummy bears, and added a couple of cute little gingerbread men that had escaped the cookie decorating at Christmas.

This cake was a lot of fun to make, and fun to serve, too: a lot of the kids called dibs on one area of the cake or another. My older daughter even requested one for her birthday, which is just three months after her sister’s. But that’s another story… 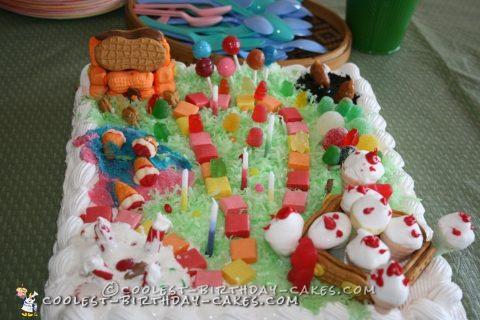