My daughter LOVES wolves. I decided to make one myself, even though I have never attempted to make a “realistic” looking cake before, and had no clue where to begin. After searching the internet for “ideas”, I decided it would be easiest to do a front view of a wolf’s head.

I started with two 9″ X 13″ cakes, stacked on top of each other. I cut the shape between the ears out and reserved those two shapes, unstacked the cakes, put chocolate butter cream on the base cake, and placed the second layer back on top. I then used the two reserved shapes that I had from cutting out between the ears for the nose shape. I found it easier to hold them in place by icing between them and all around the perimeter of the shapes.

I then “shaped” the sides of the 9″ X 13″ base to get a general shape that I thought resembled a wolf’s head and start of it’s neck. These pieces of cake were then used to fill in the bridge of the nose and give it a fuller “snout” look. I then dirty iced everything and placed it in the fridge to firm up. After a few hours, I removed the cake from the fridge and while it was very cold, I used a toothpick to scratch in where I thought the eyes, mouth, and the beginning of neck should be.

While the cake chilled, and before I did the “scratching”,  I made a large batch of vanilla butter cream which I divided into four bowls. One bowl was kept white, another was light grey, third a dark grey, and fourth black (I did find out through trial and error that it was easier to start with chocolate butter cream and add some black to get the color I needed without using an entire jar of paste coloring! duh….).

From there I literally took a small offset spatula and “painted” the cake while using a photo of a wolf as reference. My hand became my palette and I literally smeared the icing on with the spatula. I stood back from the cake every once in a while to see my mistakes or areas I thought needed to be changed. The eyes were “swirled” with the tip of the spatula, as was the nose/nostrils. The ONLY thing I used on this cake was that small offset spatula, and my hand as a “palette” to hold icing if needed. I will mention that over twenty-five years ago I was a graphic artist for a little while, but I truly don’t feel that this had any effect on how this cake turned out.  If you pay attention to the positive areas of a design, AS WELL AS the negative areas (the space “between” shapes), anyone can create beautiful work.  After all, that is all I did (by the way, I have no painting or sculpting training).

Good luck to all. Hope you found something in my rambling helpful.  Be safe. 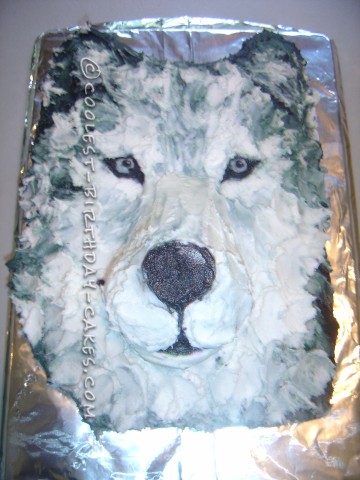 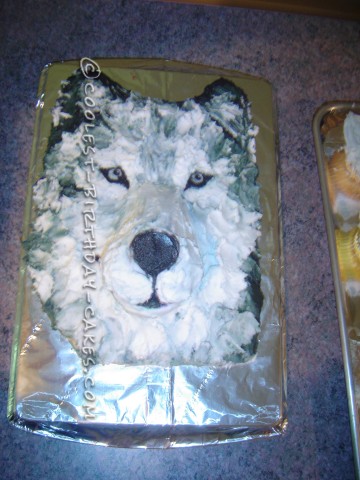 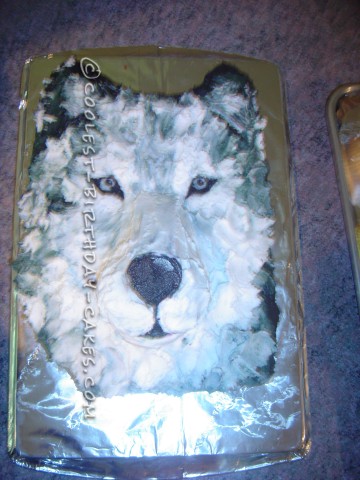 4 thoughts on “Cool Realistic Wolf Cake For My Daughter”