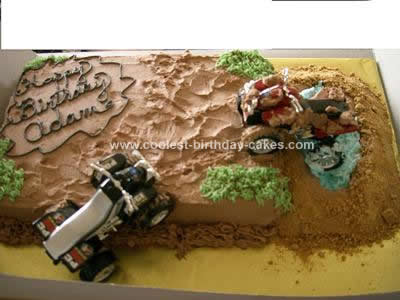 I used 2 yellow cake mixes in a 13×9″ baking pan for this 4 Wheeling Cake Design. Of course the cake had a nice dome on it. Not that I planned it that way but it actually turned out to be very helpful. I leveled off the cake and I was going to make a hill for the 4 wheeler, but then decided to make a pond instead. So I cut an oblong hole in the dome part and filled it up with “water” (blue frosting).